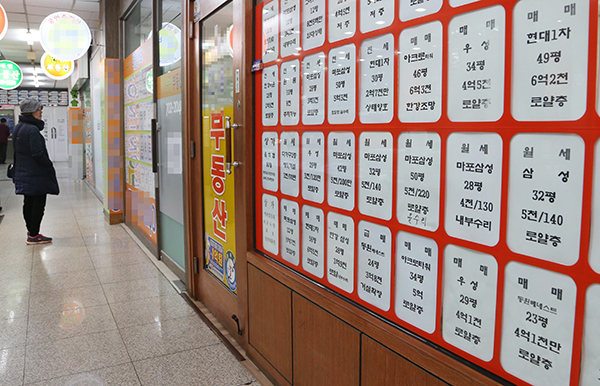 Leaflets advertising leases on a monthly rental basis are seen at a realtor in Mapo, northwestern Seoul, yesterday. The government announced measures to divert demand for lump-sum jeonse contracts to monthly rentals. By Kim Kyung-bin

To encourage tenants to pay monthly rent rather than the traditional Korean lump-sum jeonse, the government announced yesterday an expanded tax credit system.

The Ministry of Strategy and Finance and the Ministry of Land, Infrastructure and Transport came up with the measure to “advance the local housing rental market.” It expects Korea to undergo a major transition from a rental market dominated by jeonse, the two-year lease contract with large deposits, into the kind of monthly rent-dominated market that prevails in the West.

It was the first government plan announced after President Park Geun-hye ordered her ministers to carry out the three-year economic innovation plan she detailed Tuesday.

Koreans still prefer the jeonse system, which requires a large lump-sum deposit to lease an apartment or house for two years. The tenants get the lump sum back when they move out, and, added to their savings over the two years, they are closer to having enough money to buy a residence. 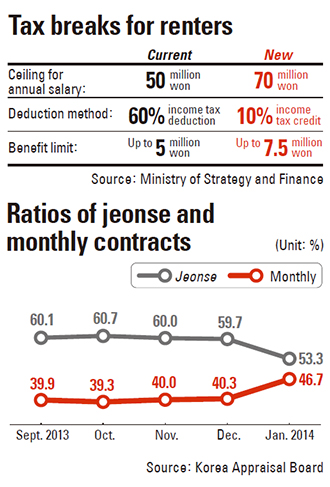 But the supply of jeonse housing has run short of demand, driving up prices. And because of low interest rates, landlords haven’t been earning much on the jeonse. Some have switched to the monthly rent system, while others have just raised their jeonse price.

The new measures will benefit both tenants and landlords using the monthly rent system.

On the tenant side, renters who earn 50 million won ($46,904) or less can currently deduct 60 percent of the rent they pay from their taxable income. They can deduct up to 5 million won per year.

From this year, the system will change. Renters who earn 70 million won a year or less will be eligible for a credit on their tax payment of 10 percent of their annual rent. The maximum amount rent to be calculated will be 7.5 million won.

Under the current income tax deduction system, a tenant who earns 50 million won a year and pays 500,000 won a month in rent would receive an average tax refund of 540,000 won at the beginning of every year (if normal deductions for tax were taken from his salary every month).

Under the new measures, that tenant would receive a tax refund of 600,000 won from next year, according to the government’s calculation.

On the other hand, people who sign jeonse contracts will see a drop in government assistance.

From April, government loans for jeonse from the National Housing Fund will be offered only to people signing contracts of 300 million won or less. Currently the limit is 600 million won.

Commercial banks will also reduce the limit on loans guaranteed by the Korea Housing Finance Corp. to 400 million won.

The government also prepared a tax break for people who own more than two residential units to encourage them to rent out one or more. Rental income of less than 20 million won per year will be exempted from income tax.