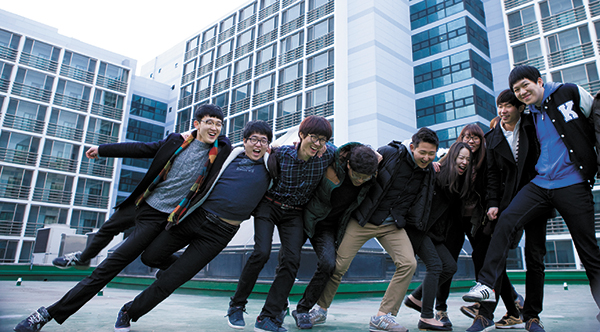 Students who live at Namdo Haksuk, a dormitory for those from Gwangju and South Jeolla, pose for a photo on Feb. 18. By Kwon Hyuk-jae

Lim Geun-seok, 47, who is originally from Haenam County, South Jeolla, has fond memories of the Namdo Haksuk, a dormitory for students from Gwangju and South Jeolla in Dongjak District, southern Seoul.

In 1994, he met his wife there when he was studying at the Graduate School of Business of Seoul National University.

“One day, when I came back to the dormitory, I saw a girl playing piano. I got a crush on her, so I met her through acquaintances, and we used to talk all night over the intercom and walked around at nearby parks. The girl, who used to live on a different floor of the same building, is my wife now,” said Lim.

The dormitory is celebrating its 20th anniversary in March. When a JoongAng Ilbo reporter visited there on Feb. 18, its lobby was full of parcels of household items sent from the homes of new students.

“The Namdo Haksuk’s building was funded by 170 million people in Gwangju and South Jeolla, from various aspects of society, including the then-Gwangju mayor, entrepreneurs, farmers and so on,” said Kim Wan-gi, 70, head manager of the dormitory. “What hasn’t been changed for its 20 years of history is that students here appreciate the help and love their hometown.”

The biggest advantage of the dormitory is its cheap boarding fees and tasty meals. “I used to pay 100,000 won ($93) per month,” said Jo Gyo-sik, 47, who now works at GS Caltex. “The students liked the meals at the Haksuk, so some even packed them for lunch.”

The fee is now 140,000 won. “In my freshman year, I used to pay 2 million won every six months to the school dormitory, excluding meals,” said Kim Myoung-ho, a Konkuk University student. “I applied for the Namdo Haksuk because it was cheaper than any other alternatives.”

To manage its 810 students, the Namdo Haksuk has set strict rules. Students living there must get up at 6 a.m. and return by midnight. They are not allowed to leave food behind, and they should attend lectures by invited celebrities once a month. If a student does not abide by the rules and earns a certain level of penalty points, he or she might be restricted from living in the dormitory.

“I used to talk with the late Kim Jun, the then-headmaster of the dormitory, every time I felt I was getting naive,” says Seo Bong-ha, a 45-year-old prosecutor, who entered the Haksuk in 1994. “The strict and regular routine I learned at the Haksuk is also helping me with my work as a prosecutor.”

But despite the strict rules, students have had a great deal of memorable experiences.

“We did not have cell phones but only beepers, so it was common to make phone calls to girls through the dormitory intercom,” said Ju Woong, 42, a professor at Ewha Womans University Cancer Center for Women. “But students were very careful about dating because they worried that their parents might find out about it because they were all from nearby towns.”

The atmosphere of the Haksuk has changed over the years. Its mandatory morning exercise was replaced by club activities such as yoga, strolling or jogging, and people must have their fingerprints scanned to use the nighttime entrance.

“In the past, the order between students was more strict, so new students could hardly change the TV channel in the students’ lounge, for example” said Jeong Byeong-su, an official who has worked at the dormitory since it opened. “But, these days, many students don’t know each other, and they don’t bother to follow such an order any more.”

The students’ dating culture has also become relatively open. “It is easy to see couples in [comfortable clothes] hanging out together all day long,” said Jang Ji-hyeon, 22, a Dongduk Women’s University student who has been living in the dormitory since last year.

Some are seeking to get in the dormitory for collateral benefits. Companies, whose heads are from Gwangju or South Jeolla, hold briefing sessions for recruits from time to time or even request recommendations for new employees. Also, an alumni wives’ organization supports 30 students every year with volunteer activities, backpacking trips and cultural experience programs in foreign countries.

Plus, some students receive scholarships from those who used to stay in the dormitory. “Alumni members hold a year-end party every year in December and grant scholarships to students,” said Ko Jae-ho, a Haksuk official. “In many cases, those who received a scholarship give another back to younger students later, like a relay.” Since the dormitory was opened until last year, 2.3 billion won in scholarships have been given to 713 students.

Thanks to such aids, the Haksuk has turned out numbers of successful people. Among more than 9,000 students who stayed at the facility, 156 passed national examinations to become high officials, 65 became medical doctors and 35 advanced to the press and media.