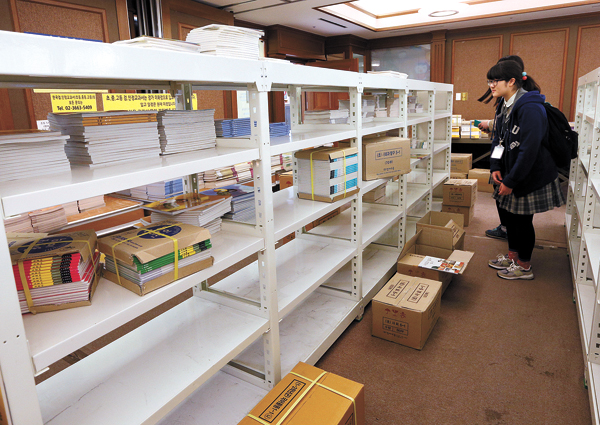 Shelves for school textbooks at Kyobo Bookstore in Seoul were almost empty on Wednesday as publishing companies are at odds with the Ministry of Education over the prices of their books. By Kim Sang-seon

Ninety textbook publishers are pushing back against the Ministry of Education’s order to cut the prices of their books, filing official complaints and threatening to stop publishing textbooks altogether.

The Ministry of Education announced earlier this week that it asked publishers to lower their prices by 30 percent to as much as 44 percent on 171 textbooks. For example, the cost of 34 books for third and fourth graders was instructed to be reduced to 4,493 won ($4.20) from 6,891 won, while 99 textbooks for high school students were ordered to be adjusted to 5,560 won from 9,991 won.

The Education Ministry explained that the move is intended to ease the financial burden on students and their families. The education authority also said that the publishers tend to inflate their prices by lowering the projected demand. The lower the quantity demanded, the greater the per-unit printing cost, so prices become higher.

“There was a huge discrepancy between the actual demand and projected sales by the publishing companies. On one occasion, the gap amounted to 270,000 copies,” said Cho Jae-ik, an official of the Education Ministry.

The order follows a reform bill passed in February that gave the Education Ministry more authority in influencing the price of textbooks in the primary and secondary education system to help control soaring costs. The bill enables the ministry to issue legally binding orders.

“We found that the text prices soar too rapidly,” said Shim Eun-seok, of the education policy division at the ministry. “We issued advice twice, but the publishers rarely changed, so we decided to impose an order.”

The average prices submitted by publishing companies this year are expected to be two and a half times higher than in 2011, according to the Education Ministry.

Prior to the reform bill, the ministry was limited to offering advice, with publishers enjoy greater autonomy in determining prices. The more relaxed pricing system was initiated under the administration of conservative former President Lee Myung-bak in 2010. The former administration called for greater competition and higher-quality materials in the textbook market.

But many people said they were worried publishers would just improve the appearance of their textbooks, adding unnecessary images and fancy graphs, to justify price increases.

“It’s inevitable that prices will increase as more companies incorporate colorful images and maps and switch to hard covers,” said a 2010 report by Kim Jae-choon, presidential secretary for education at the Blue House.

“The Education Ministry encouraged us to enhance the quality of textbooks by easing regulations,” said Hwang Geun-sik, an assistant administrator of an organization that represents the publishers of government-certified textbooks.

“A price increase is needed to produce quality texts. Now the Education Ministry is going back on its word” Hwang said.