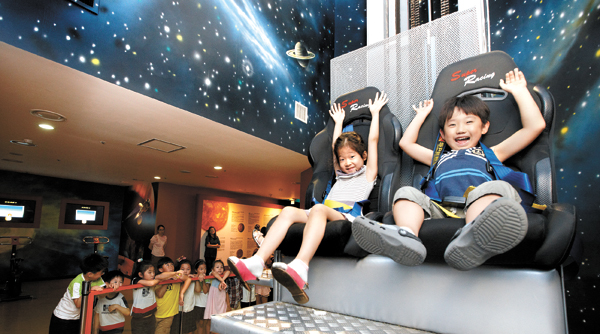 Last Saturday, the acclaimed pianist Cho Jae-hyuck was performing a free concert in Paju, a city northwest of Seoul in Gyeonggi. But while performing is nothing unusual for Cho, the location - a library - was.

Cho’s concert was held to a packed house in the 300-seat Solgaram Art Hall in Garam Library.

The art hall and the 3,862-square-meter (41,570 square foot) library just opened on March 12, an impressive facility that cost Paju 11.3 billion won, or about $10.5 million. The whole library has a music theme, with 4,600 albums in its collection and a regular lineup of free concerts.

“It’s very unusual to have a culture complex for both reading and enjoying music performances,” said Kim Geum-hui, who was in the audience.

Unusual, perhaps, but it is hardly alone. Local libraries in Gyeonggi are evolving these days, going beyond just lending books to featuring a wide range of features and facilities. Many now offer hands-on experiences, in areas such as music, science and even toys.

A lot of specialized libraries are equipped with centers for education and adventure. This project was under discussion until 2010 and finally kicked off in 2010.

The next day, 10 people gathered at Uijeongbu Science Library, in Uijeongbu to look at the stars and read related books on astronomy.

The science library has been running the observatory since it opened in October 2007. The facility is devoted to featuring stereoscopic images and observatory instruments, such as a refracting telescope.

“Children easily get bored just reading books,” said Jang Su-gil, who was visiting the library with his preschool children. “I visit this library often to observe the constellations with my children.”

Over half of all the public libraries in Gyeonggi - 111 out of 208 in all - offer some sort of specialized features. About 100 of them are home to at least one center dedicated to some other function than book lending or reading. Most of the construction costs were provided by local governments.

The main purpose of specialized libraries is to encourage a “reading culture,” which these days is losing the public’s interest. They encourage people to read books and enjoy cultural institutions at the same time.

Jungwon Children’s Library in Seongnam also has a room for observing the heavens, with five telescopes available including a 400-millimeter reflective one.

Bogae Library in Anseong has the Park Tu-jin Library, which is dedicated to a famous poet from the area. The place is well known to students and citizens interested in literature.

Some libraries even lend toys. Bugok Library in Gunpo has run a toy-lending operation since opening in July 2013, with about 400 toys available.

“Our library is always crowded with children, visiting to read books and borrow toys,” said Kim Sang-gyun, the chief librarian.

Since these changes are still ongoing, the library management division in the Gyeonggi Provincial Government is looking forward to increasing the utility of libraries even more. “Various types of specialized libraries will be operated to offer local cultural spaces,” said the chief of the library division.