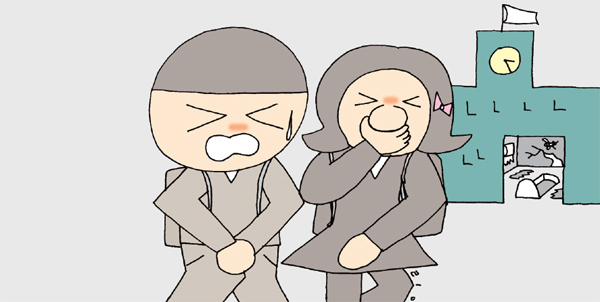 Seoul may be futuristic enough to attract the filming of the Hollywood blockbuster “The Avengers: Age of Ultron,” but let’s hope the crew doesn’t have to make use of a toilet in any nearby public school.

A first grader in an elementary school in Jongno District, central Seoul, heads for the toilet immediately upon arriving home every afternoon. After a couple of weeks at the school, the young student told his parents he couldn’t bear to use the grubby and outdated facilities at his school.

“When I visited the school, there were only toilets that students have to squat to use,” said his mother. “They weren’t much different from the toilets we used when I was a student. I’m worried that he’ll get constipated or suffer from bladder problems.”

This is a widespread problem in primary and secondary schools across Korea, with Seoul being no exception - even in its celebrated Gangnam District.

“I don’t even drink water in the morning because I don’t want to have to go into the dirty school restroom,” said a 15-year-old student who goes to a middle school in Gangnam District, southern Seoul. “Since I can’t go to the bathroom in school, I can’t even think of playing football or doing any other activities after school.”

“My son comes home every day grasping his belly,” his father added. “I can’t believe it is happening at a school right in the middle of Gangnam District.”

Nearly two years ago, Korea entered the “20-50 club,” the club of nations with over $20,000 gross domestic product per capita and a population of more than 50 million, thanks to its excellent performance in the global economy.

But an educational system once praised by U.S. President Barack Obama lets down its students in a fundamental way.

In their homes, Koreans have come a long way toward wanting advanced facilities. A great number of Korean households have toilets with bidets and it’s very common for people to avoid expressway rest areas or cafes and malls with dirty restrooms.

But at schools, Korea is still in the dank restrooms of the 1960s.

When a reporter from the JoongAng Ilbo visited a middle school in Jungnang District, central Seoul, the restrooms were stinky and dark. Many lights were broken and the ventilating fans in the windows were rusted and not working. There was no soap or toilet paper.

“Toilets are uncomfortable because I need to squat to use them, and the restroom is dark and cold,” said a third grader of the middle school. “When I really need to go to the restroom, I sneak into the teachers’ restroom.”

A second grader at the school said he never defecated in his entire first year. “When I need to pee, I hold my breath because of the smell,” he said.

“Restroom doors are broken and the foul odor even comes into the school cafeteria,” admitted an official from the school. “We are aware it needs to be repaired immediately, but we don’t have the money for it.”

Out of 1,300 public elementary, middle and high schools in Seoul, 48.5 percent have squat toilets. More than 600 schools haven’t conducted any renovation for the last 10 years.

“As the budget for free school lunches this year increased by 35.1 billion won and another 315.3 billion won was invested in free education for preschoolers, the money assigned to school facilities has dropped,” an official of the education office said.

“In most schools, one or two janitors have to clean the entire school in two to three hours, which makes them rush,” said Lee Chang-guk, head of the School Environment Improvement Support Center.

Experts say students may suffer health problems if they don’t regularly go to the toilet.

“If children in a period of development don’t drink water and hold in their urine, the bladder can swell and lead to bladder disorders,” said Lee Hyung-lae, a professor who teaches urology at Kyung Hee University.

“Despite the improvements in restrooms in most places over the last two decades, only school toilets remain underdeveloped,” said Pyo Hye-ryung, president of the Citizen’s Coalition for Restrooms.