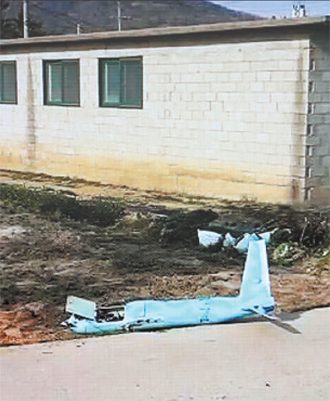 A drone crashed on Baengnyeong Island at 4 p.m. on Monday. Its engine was made in Japan, and its other parts were made in China. A similar drone was found March 24 in Paju, Gyeonggi. [Screen capture from YTN]

An unidentified unmanned aerial vehicle (UAV) equipped with a digital camera was found on Baengnyeong Island in the Yellow Sea Monday afternoon and the Korean Army is examining it, according to national intelligence and sources with the Army yesterday.

The discovery came seven days after a crashed drone with a digital camera was discovered in Paju, Gyeonggi, near the demilitarized zone, or DMZ.

“An unmanned aerial vehicle from an unknown nation crashed on Baengnyeong Island at around 4 p.m. on March 31,” said the source with the Korean Army. “We collected the vehicle and are in the middle of a probe.”

The source added that both the military and intelligence service are assuming that the drone could have been spying on South Korea for North Korea.

Given that it crashed the same day that Pyongyang fired off hundreds of shells in the direction of the Northern Limit Line, the disputed maritime boundary in the Yellow Sea, the unmanned aerial vehicle probably originated in North Korea.

“Since Baengnyeong Island is far from land, the distance makes it almost impossible for ordinary citizens to send a drone all that distance,” said a military source. “The machine is not used by the Korean Army, and broadcasting stations have denied that they dispatched it.”

Broadcasting stations have been increasingly relying on drones, or so-called helicams, to shoot unique angles. But their altitude is limited to 150 meters (492 feet) above ground.

A different government source said that the drone’s engine was made in Japan and other parts of it were made in China. Its length is about 2 meters.

The other drone carrying a digital camera crashed in Jori-eup in Paju on March 24. Images found on the camera showed that the drone had followed a route from central Seoul through the Gupabal area in northeastern Seoul to Paju. It took photos of major landmarks in central Seoul, including the Blue House and Gyeongbok Palace, which are close to each other.

Flights above the presidential office are illegal, but there is currently no legislation that prohibits photography being taken from the air. Analysts said a small UAV weighing less than 12 kilograms (26.5 pounds) could easily avoid military radar.

The vehicle is estimated to have flown as high as 300 meters above ground, and the resolution of the photographs is very poor.

An initial investigation into the camera revealed that it was equipped with a wide-angle lens, which is rarely used by ordinary photography aficionados but is commonly used in aerial photography.

The discovery raised fears of drones being used for spying on the most sensitive parts of the Korean government and also the possibility of terrorist strikes on major facilities.

A recent Pentagon report to U.S. Congress confirmed that North Korea has developed an indigenous UAV capable of attacking ground targets that is based on stolen U.S. drones. Images of the North Korean drone in flight were shown as part of a March 2013 military drill, the report said.

The North Korean drone was first disclosed by South Korean intelligence in February 2012, according to the Washington Free Beacon on March 5.

The Pentagon report also noted that North Korea’s military, among the largest in the world, remains forward deployed near the DMZ separating the two Koreas and can initiate an attack against South Korea with little or no warning.