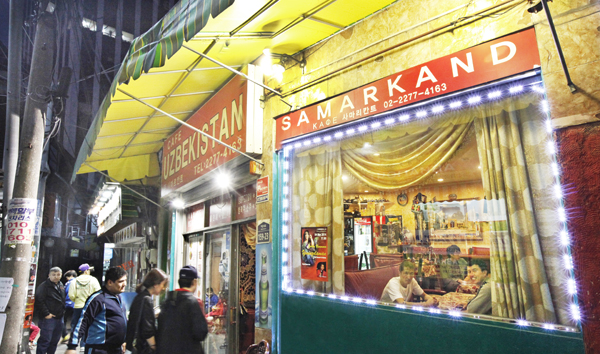 Uzbek restaurant Samarkand maintains a strong presence with four branches in Dongdaemun’s Central Asian Village. The enclave is home to many Russian and Central Asian people. By Park Sang-moon

If you took a quick glance at a street behind the Dongdaemun History and Culture Park Station, you might see nothing out of the ordinary: shops, grocery stores and ordinary Asian-looking people going about their business.

But many of those people aren’t speaking Korean and if you look closely, they don’t look Korean either. The Cyrillic characters on signs and shop fronts are a clear signal that you have entered Korea’s Central Asia Village.

It serves as home base for ethnic Korean traders from those nations.

It was a rainy spring Saturday morning when a group of ethnic Koreans from Kazakhstan and Uzbekistan were waiting for friends outside Medovik, a grocery store that sells Russian specialties.

“I decided to live here five years ago because I can meet people with the same background and I can find the food that I used to eat,” says Ligay Artur, an ethnic Korean, or Koryo saram, from Uzbekistan.

“I work for a company that exports auto parts to Russia and other Asian countries,” he says.

Many foreign residents in Dongdaemun make a living in trading goods. The main items traded are socks, clothes and other daily necessities.

That is why the alley is lined with shops, shipping companies and cargo service centers catering to those small-business men.

Dongdaemun, home to countless fashion boutiques and a textile market, is the perfect option for them.

“People began to gather in Dongdaemun from the late 1990s because you could get clothes and other fabrics at cheaper prices, usually in bulk,” says a 55 year-old Korean woman who runs a small motel in the expat-packed alley.

“What they are buying is mostly socks and fabrics,” she continues,“and what they bring here are bread and honey. They flew from their countries for the weekend, so Saturdays and Sundays see the most active presence of people.

“And many of the long-term residents here make a living running different business or restaurants that offer services to the traders.”

As an eight-year resident, she calls herself an “expert” on the area, adding that her motel caters to merchants visiting Korea on weekends.

A 42-year-old Russian man who asks not to be named wanders around the street after touring Dongdaemun Market and the shopping malls.

“I often come here on Saturday and leave the next day,” the man says. “Merchants in my country like products from Korea, and Dongdaemun offers good bargains.” 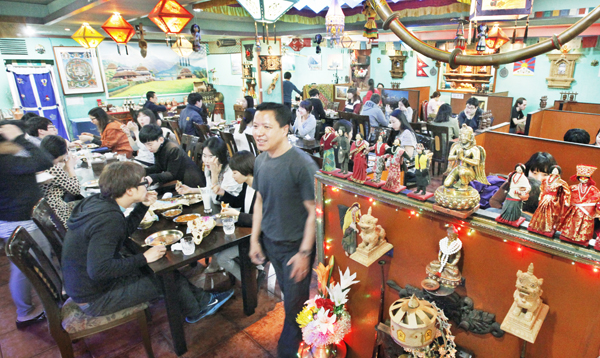 Everest Restaurant, near Dongdaemun Station, central Seoul, is popular among locals and native Nepalese seeking a taste of home. By Park Sang-moon

While Russians and Central Asian people can be found in the alleys around Gwanghee-dong near Dongdaemun History and Culture Park Station, Nepalese congregate in an adjacent area nearer Dongdaemun Market.

A dozen Nepalese restaurants, souvenir shops and grocery stores are clustered around the area near Dongdaemun Station.

Nepalese have had a presence in Korea for a long time, but the number significantly increased with the introduction of the Employment Permit System in 2006, a government-supported employment program.

“Before that period, Nepali people held different positions,” says Dhiraj Rai, a Nepalese who runs both the Bhetghat Nepal Restaurant and Himalaya Tours and Travel in Dongdaemun. Some were students, others engineers.

“But since the employment program, most Nepalese fill low-skilled positions in manufacturing and the construction business,” he said.

“People from Nepal enjoy gathering here,” says Rai. “I think we have a lot in common with Koreans. We love drink and hanging out.”

Restaurants owned by Nepalese play a central role in offering locales to socialize and relieve homesickness. Among them is the restaurant Namaste.

Actually, Namaste is a chain with five branches, including one in Dongmyo Station, which is frequented by Nepalese and Koreans who want to try foreign food.

Namaste also hosts an annual Teej festival for Nepali women. Teej is a fasting festival that takes place in August or early September to bring longevity and prosperity to women’s husbands and families. On the festival day, women clad themselves in red clothing, wear glass bangles and other fancy ornaments, and sometimes apply henna to their hands.

“There are no specific religious or cultural establishments for us, so restaurants and small pubs operated by Nepali people serve as central gathering places,” Rai explains.

Recently, a handful of Nepalese restaurants have sprung up in other areas such as the Ewha Womans University and Hongik University neighborhoods.

Likewise, you can find Nepali restaurants in Ansan and Uijeongbu in Gyeonggi, which have lots of factories employing Nepalese.? 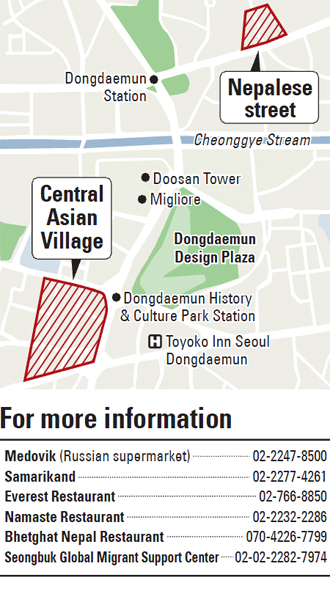 One of the most successful restaurant businesses in Dongdaemun is Samarkand, which has no less than four branches in the exotic enclave, all within a few steps of each other.

Giving off a homey atmosphere, the family-run restaurants offer Uzbek specialties such as shashlik (minced meat cooked on a skewer), plov (a meaty pilaf dish) and lagman (soup noodles).

Ala-Too Cafe is an Uzbek cafe that specializes not only in Uzbek staples but also the country’s desserts. Another popular dish is manty (steamed lamb dumplings).

For people who like their food spicy, the Nepalese restaurant Everest is a recommended destination. Signature dishes include chicken curry, rice, soups and nan bread. The food is moderately priced and the atmosphere is comfy.

To reach the Central Asian Village, get off at Dongdaemun History and Culture Park and come out of exit 8.

To find the Nepali neighborhood, get off at Dongdaemun Station and come out of exit 3. You will find a small alley leading to the market.