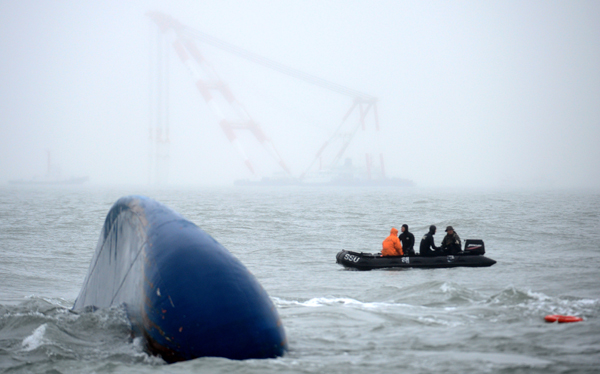 A crane, barely visible due to fog, floats near the capsized Sewol ferry yesterday. The crane is one of four that will be used in lifting the 6,825-ton ship to the surface. All four arrived at the accident site yesterday. [NEWS1]

Korean shipbuilders are putting forth their best efforts to support ongoing rescue operations for those still missing inside the capsized Sewol ferry by sending cranes and much needed equipment and manpower.

Three large marine cranes had arrived in the waters off the southwestern coast as of yesterday to help rescue those still missing aboard the 6,825-ton vessel. And a floating dock that can support heavy ships of the Sewol’s size will also be used in the recovery mission.

Samsung Heavy Industries and Daewoo Shipbuilding and Marine Engineering each sent a 3,600-ton marine crane to the scene. The nation’s two largest shipbuilders also sent more than 30 employees to operate the equipment. Hyundai Samho Heavy Industries, a subsidiary of Hyundai Heavy Industries, was also at the ready to provide a floating dock capable of holding up to 80,000 tons that could assist in lifting the ferry’s hull. 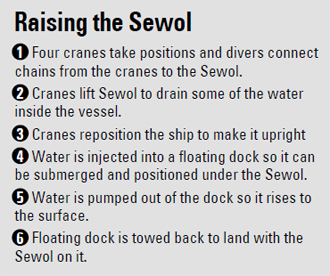 The capsized Sewol is about five times bigger than the 1,300-ton Cheonan warship that sank in March 2010. During recovery efforts at the time, a large crane raised the vessel and placed it on a barge.

But analysts say it would be difficult to only use cranes to bring the Sewol ferry to the surface and that the floating dock would relieve some of the pressure. The dock, measuring 300 meters (984 feet) long and 70 meters wide, allows shipbuilders to build on the surface of the water. This one can submerge 24 meters underwater and potentially lift the ferry up 146 meters.

When the recovery of the ferry begins, the dock would be submerged and placed under the vessel to support it as the cranes lift it to the surface.

“At the moment, we have completed preparations to send the dock to the scene of the accident,” a spokesman from Hyundai Heavy Industries said.

In 2012, a floating dock was also used to hoist up the Italian ferry Costa Concordia.

One was also used in 2000, when a Russian nuclear submarine sank 150 meters in water off the northern part of the country.

Because Hyundai Samho is based in Yeongam, South Jeolla, it could dispatch the dock at a moment’s notice.

However, its use is not as easy as it sounds and could prove a complex task, some analysts have said, especially given that the Sewol ferry tilted to one side before capsizing.

“The first job would be to relocate the ferry, and then make space for the floating dock to come in before lifting the ship, which is difficult work,” an industry insider said.

The marine cranes reportedly departed for Jindo, South Jeolla, late due to conflicts over charter money between marine police and the shippers, though they arrived earlier than anticipated. The DSME’s crane arrived at 11:40 p.m. on Thursday, while Samsung’s arrived around noon yesterday. A crane from Korea Marine Environment Management also reached the scene around 4 p.m. yesterday. So far, 268 people remain unaccounted for.