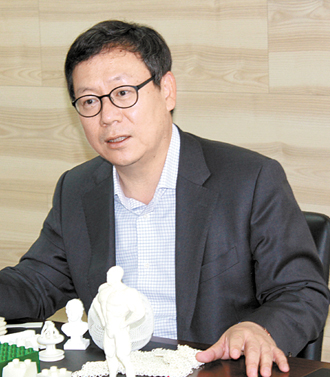 Howard Shin is the futurist mind of the Korean business community. And to him, 3-D printing is the future. The CEO of Daelim Chemical is Korea’s missionary of 3-D printing, using every opportunity to talk about the sea change he believes the new industry will bring.

Korea’s business community recognizes his passion. He was given the title of inaugurating head at the association of local 3-D printing-related companies or research institutes that opened last month. Yesterday, he received a top innovation award from the Korea CEO Summit, along with the representatives of seven other local companies, including Yuhan-Kimberly and Panasonic Korea.

It was not given just for Shin’s talk. He is encouraging his employees to experiment to maximize the value of 3-D printing, like producing name cards with 3-D printers, which some of the employees are already doing. “Our company is working with architects to build a house with 3-D printers,” Shin says. “I think the project will be able to start in earnest by the end of this year.”

“The term 3-D printing has become a buzzword since U.S. President Barack Obama promoted it as the future of his country last year,” Shin says. “But still, not many people know exactly what that buzzword means to us. They don’t know how important it is.”

He sees 3-D printing as having the potential to be the next-generation backbone industry for Korea.

“The mobile device industry with which Korea has been enjoying success in recent years is showing signs of slowing. And there’s no guarantee that the industries in which Korea has long been competitive - shipbuilding, machinery and chemicals - can be sustained. 3-D printing can play a significant role in the convergence of many different industries by providing the platforms on which they are inspiring innovation with one another.”

Many global companies are jumping into the 3-D printing business. Hewlett-Packard, a powerhouse in 2-D printing, announced in March it will roll out its first 3-D printing product next month. According to market research firm Gartner, the global consumer market for 3-D printing will grow to $5.7 billion by 2017.

Shin said the industry is still in its early stage. Top companies in the 3-D printing industry are seeing revenue worth less than 1 trillion won ($982 billion) annually, he said. That provides small and midsize companies in many parts of the world with an ample chance to succeed.

The Korean government also paid attention to 3-D printing recently, including it on the list of high-tech industries it wants to foster under the Park Geun-hye administration’s creative economy initiative. Last month, the government announced it will spend 2.4 billion won this year to establish 3-D printing centers.

Shin believes that is the right move for Korea. The 3D Printing Research Organization, a collaboration among about 20 local companies and research firms that he took the helm of last month, will help the state-initiated R&D project on 3-D printing, he says.

His company, which has developed many chemical components for industrial use over the past 38 years, is also betting big on the future of 3-D printing. Daelim Chemical is a leading provider of chemical products used for Fused Deposition Modeling, the most well-known 3-D printing technology. “It is a blue ocean industry,” Shin says.