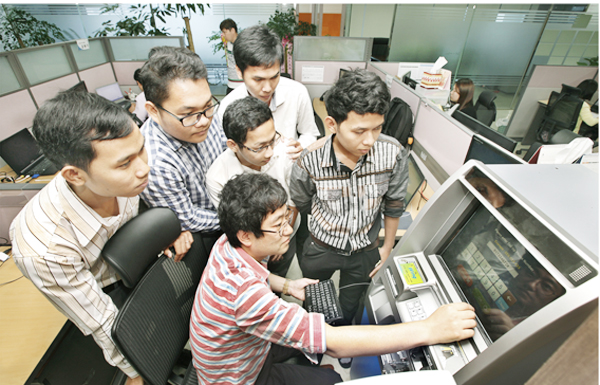 Cambodia boasts one of the youngest populations in Southeast Asia, with youth under 30 making up nearly 68 percent of the total number of people in the country, according to the United Nations.

And its young demographics and relatively cheap labor are just a few of the reasons that some Korean companies have begun shifting their focus toward the region in an attempt to boost human capital and bring up potential talent.

Among those businesses is Webcash, an electronic banking solutions company based in Seoul. In cooperation with the Korea International Cooperation Agency (Koica), the company has developed a training center in Phnom Penh and offers a select number of Cambodian trainees the opportunity to learn new skills at its headquarters in Seoul.

Van Daravuth, 20, and Lay Bunnavitou, 21, came to Seoul about a month ago to further their training at the company after completing a nine-month course offered by the Korea Software HRD Center, a program in which Webcash and Koica invested 6.5 million dollars for five years to educate and train Cambodian IT experts.

The two Cambodian men said that the training in Korea has so far taught them not only practical software and application development skills but also opened their eyes to Korea’s higher working standards.

“People really pay attention to getting work done quickly without making any mistakes compared to Cambodia,” said Van, who is involved in a department concerning ATM machine development.

Currently, 18 Cambodians are being trained at the company, though Webcash said that the training wouldn’t necessarily lead to employment.

“After one or two years learning in Korea, they will go back to Cambodia and work at a corporation called KOSIGN,” said Hwang Jeong-won, the deputy head of the global business division at Webcash.

“All training is provided free of charge, and one of the conditions [of the program] is that trainees go back to work at the joint corporation,” Hwang said. “But in exceptional cases, a few of them can be hired at the participating companies in Korea.”

But he emphasized that the main focus of the system is to nurture talent and provide skills that young engineers and developers can bring back home with them.

The HRD training center usually accepts around 90 students with a background in engineering, and since its start an increasing number of applicants have vied for the chance to participate in the training program.

“Last year, not that many students applied but this year the rate of competition was five to one,” he said.

“They consist of a programming lecture, Korean language and practice sessions.”

Hwang said the program was designed to filter out about half of less competent trainees in order to increase competition.

“Based on their attitude, test scores and other exams, we weed out trainees,” he said, adding that the company will invite the best applicants to Seoul over the next five years.

Hwang said that the relatively longer training period will ensure that many learn decent skills, as other similar programs designed for workers from developing countries have previously been criticized for their brevity.

“We acknowledge that in training programs that are too short, participants can’t really delve into their given skill sets,” he continued, “but this program can last years if you count initial training at the center and in Seoul and then at the joint corporation.

“During the period, they receive plenty of opportunity to learn in-depth, sophisticated software development skills,” he added.

When asked about participating in the overseas training program, Lay said that his parents welcomed his decision.

“My parents were not concerned that much,” he said. “Instead, they said that it will be a good opportunity to be more independent and learn more skills in a practical way in Korea.”

“And the company offers a good welfare system, so life here isn’t that hard,” he added.

Cambodia’s economy has grown at double-digit rates in recent years, with the proportion of people receiving primary education gradually increasing.

Still, many point out that despite the bounty of human resources, there is not enough proper infrastructure to develop adequate vocational training.

Despite the Southeast Asian country’s efforts to shift into a labor-intensive economy, the lack of available training has triggered a sharp disconnect between the demands of the industry and the skills of its young workforce and those of aspiring job seekers. “In Cambodia, there are not many opportunities like this,” Van said. “I heard that Japan also offers a similar program, but the size is far smaller than the HRD center program.”