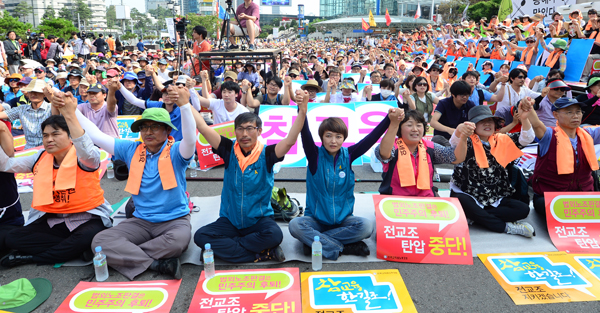 Around 1,000 members of the Korean Teachers and Education Workers’ Union stage a rally in central Seoul yesterday to protest a recent court ruling that stripped it of its legal status. [NEWS1]

Members of the Korean Teachers and Education Workers’ Union, the country’s largest liberal teachers’ union, staged a mass rally of 1,000 teachers in central Seoul yesterday to protest a recent court ruling that stripped it of its legal status.

Teachers and other workers belonging to the group left schools early to join the protest, giving it the nickname “early leave struggle.”

The protest yesterday came eight days after the Seoul Administrative Court denied the union of legal status by rejecting its claim that the government’s demand for it to expel union members who were dismissed from schools infringed upon their basic labor rights.

The union, which has been mired in a number of controversies during its 25-year history for pursuing a political agenda, such as opposing U.S. beef imports, is also demanding the government rescind its nomination of conservative Professor Kim Myung-soo as education minister.

In a display of its resolve to challenge the government, approximately 1,000 union members gathered in front of Seoul Station yesterday afternoon holding banners that read “Please protect the KTU.”

“Protecting the KTU will save democracy and basic labor rights,” said the labor union in a statement released yesterday.

“The Park Geun-hye government is trying to shut down the KTU because it wants to manipulate public sentiment by controlling education to its advantage.”

The protesters then marched toward Gwanghwamun Square.

With the court’s ruling, the group, which was founded in 1989 as an underground union and recognized by the Kim Dae-jung government in 1999, lost the legal status it enjoyed for 15 years. As a result, the Ministry of Education will not recognize its bargaining rights and stop subsidies to the union. People who are full-time workers for the union will have to return to their teaching jobs by Thursday. Union members will also be forbidden from paying monthly dues starting in July.

The government vowed to punish teachers who joined the protest. The Education Ministry says such rallies are illegal because teachers are not allowed to take collective action such as a strike.

Worsening the situation for the cornered union, the Seoul Central District Court yesterday rejected the KTU’s request for an injunction to force 118 private schools in Seoul to recognize the group’s collective bargaining rights.