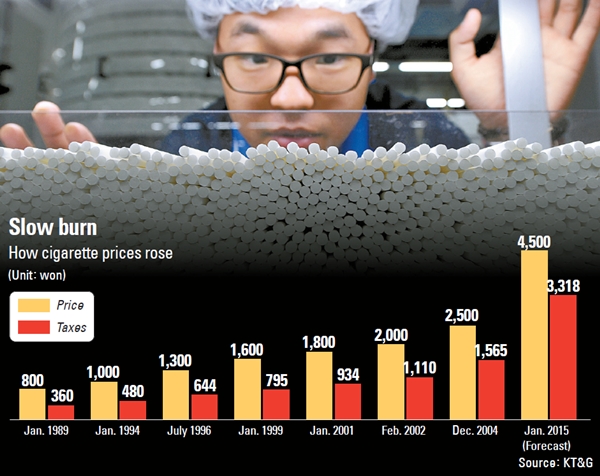 The government says it wants to discourage smoking by raising Korea’s cigarette prices, which are among the lowest in the world. The percentage of Korean men who smoke was 44 percent in 2013, among the highest in Organization for Economic Cooperation and Development (OECD) countries.

But opposition politicians and diehard smokers say the government is merely trying to plug holes in its tax revenues by milking ordinary citizens while maintaining tax cuts for the wealthy.

The increase of 2,000 won includes hikes in the tobacco consumption tax, local education tax, health promotion payment and waste payment altogether. Adding to the current taxes on cigarettes, the government will impose an individual consumption tax on cigarettes next year. It imposed the tax on luxury goods last year.

The individual consumption tax will be according to the value of the cigarette, meaning higher-priced cigarettes will get hit with a higher tax.

Of the average of 4,500 won per cigarette pack, 18.6 percent will go to the National Health Promotion Fund, which will help finance government programs for smokers, the Health Ministry said.

The Finance Ministry estimates the price rise, driven by the tax hikes, will help increase tax revenue by about 2.8 trillion won a year.

There were stark differences in reactions from the general public to the government’s announcement.

“Although it took as long as 10 years, we welcome the government’s action to raise the tobacco price,” said the Korean Association on Smoking or Health in a statement yesterday. “One of the most effective measures to help people stop smoking is to hike the price, which is agreed by experts around the world.”

The Korea Smokers’ Association, on the other hand, strongly opposed the plan, criticizing it a “typical way of taxing working-class people.”

“The government is pushing for a tobacco price hike on the pretext of promoting public health and lowering youth smoking, but its real intention is to make up for the shortfall in its tax revenue, which was caused by cutting taxes on the rich,” the association said in a statement. “It is an evil tax that puts higher taxes on the low-income class.”

“As the government’s fiscal deficit accumulates, it is turning the public’s attention to the so-called ‘sin tax’ rather than trying to raise other taxes that would spark a stronger tax revolt,” said Kim Sun-taek, chairman of the Korea Taxpayers Association.

“A radical increase in the tobacco price will lead to a greater tax burden on low-income smokers.”

“The government should have come up with a separate measure to tax the rich at the same time to minimize any tax revolt among smokers,” said Kang Byung-goo, an economics professor at Inha University.

The retail price of domestic cigarettes in Korea has been frozen for the past decade. The last price hike was in December 2004. At the time, the average price went up from 2,000 won to 2,500 won. Total tobacco sales had hovered above 100 billion won, but immediately fell to 82.3 billion won in 2005.

Korea has the cheapest cigarettes among the 34 countries of the OECD. The average price of Korean cigarettes is about a third the OECD average, the Health Ministry said.

The government will also force tobacco companies to add pictures on cigarette packs that warn consumers of the risks of smoking. It will ban all kinds of advertisements and promotional activities at retailers, including sponsorships.

Although tobacco companies have not said how much more they will charge, the market is estimating it at around 100 won to 200 won.

Some foreign brands raised their prices 200 won or so since 2011 despite opposition from the Finance Ministry. 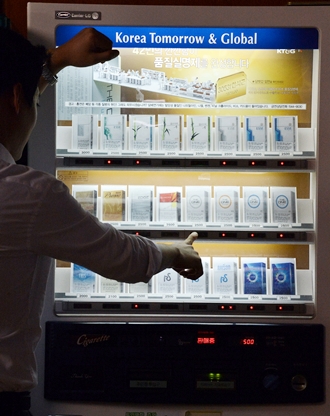 A smoker purchases cigarettes from a vending machine in central Seoul yesterday. The government announced a plan to increase the average price of cigarettes from 2,500 won to 4,500 won, the first hike in 10 years. [NEWSIS]

Although tobacco companies can set their own prices, it is custom for them to get approval from the government as any change impacts the lower income classes, who are considered the largest consumers of the products.

Prices of cigarettes are usually raised when inflation rates are low and less of a burden will be felt by people of modest means.

KT&G was the only tobacco company that kept its price fixed.

According to Mirae Asset, the Finance Ministry’s approval of higher prices on cigarettes will benefit the company’s performance.

“Assuming that the retail price on the cigarette is raised 500 won to 3,000 won, the cigarette market will shrink around 5 percent,” said Park Yu-mi, a Mirae Asset analyst. “However, the operating profit for the company will grow 7.8 percent.”

A KT&G official said the company at this point hasn’t discussed raising its share of the price.

In the first half of 2014, KT&G did fairly well, meeting the market’s expectations. Its revenues grew 8 percent year-on-year to 1.96 trillion won while operating profit nearly increased 10 percent to 546.4 billion won. Net profit, however, fell nearly 5 percent to 372.5 billion won compared to the first six months of 2013.

According to Wells Fargo Securities, the global electronic cigarette market in 2012 was only $500 million. That figure more than tripled to $1.7 billion last year and it is expected to further expand into a $10 billion market in 2017.