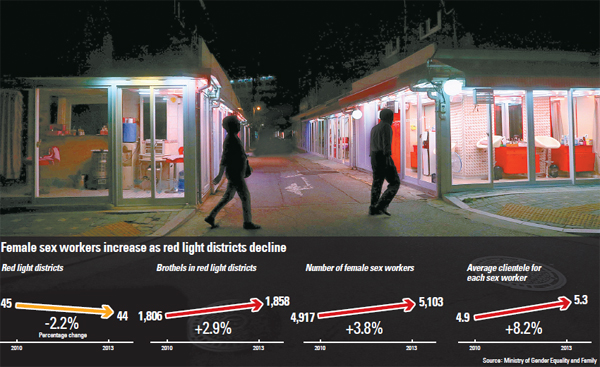 The red-light district known as Cheongnyangni 588, in Dongdaemun District, northeastern Seoul, has a banner at the entrance that reads, “Development welcome.” Dongdaemun’s district office recently approved a business plan that will turn the area near the Cheongnyangni railway station into a high-rise residential complex. By Kang Jung-hyun

Business in Miari Texas, the once-active red-light district in Seongbuk, northern Seoul, has noticeably dwindled in the past 10 years since the implementation of the 2004 Special Law on Prostitution, which bans the selling and buying of sex.

In the alleyway between one-story buildings where the brothels once thrived, not a single light shines out now, and a banner denouncing the anti-prostitution act hangs at the district’s entrance.

Similarly, in another red-light area in Paju, Gyeonggi, the number of sex parlors has decreased to 20 from about 200 a decade ago, and a partition has been installed at the entrance of an alley that shelters nondescript prostitution businesses.

Since the enactment of the special law, which also aims to protect the victims of human trafficking, the number of red-light districts - defined as a place where 10 or more brothels are concentrated - has decreased nationwide, from 69 in 2002 to 44 last year.

But while it appears the law has been effective on the surface, the prostitution industry has actually grown in areas where surveillance is relatively weak, including parts of Daegu, Gwangju, Busan and Jeju.

One area near Suwon Station in Gyeonggi has experienced an increase there in the number of brothels and prostitutes, who have flocked to the region to avoid strict surveillance in Seoul and northern Gyeonggi.

The number of sex parlors and sex workers there doubled this year compared to 2005, according to the Suwon city government.

Over the past 10 years, the prostitution industry has also transformed to avoid the confines of the law, taking the form of adult PC rooms and “kissing rooms” in order to fly under the radar.

In some places, pimps posing as ordinary citizens scour the streets to find potential customers.

On Sept. 20, two women in their 50s approached two Southeast Asian men around 2 a.m. at Dongdaegu Station in Daegu. The madams usually secure a motel room for clients and then summon the sex workers to that locale.

“You can do it at cheap price,” one of the ladies assured the men.

Another man who approached a reporter chimed in, “Because massage parlors and Daegu’s main red-light district are under severe surveillance, the sex industry is thriving in this place.”

For these reasons, among a myriad of others, the effectiveness of the 2004 law has come under scrutiny. Some experts have described it as having had a balloon effect - the problem never disappears, it only moves from place to place.

“Because prostitution is related to desire, it won’t decrease. It will just keep increasing in different shapes,” said Shin Sang-suk, vice director of the Institute for Gender Research at Seoul National University.

Transformed prostitution businesses have doubled over the past three years as traditional brothels have decreased, swelling to 4,706 in 2013, up from 2,068 in 2010.

This year, 3,620 brothels had been recorded by July, according to Korea’s National Police Agency.

And data shows that with that shift, the number of clients has also risen.

Among 1,200 men who answered an online survey conducted last year by of the Korean Institute of Criminology, 56.7 percent said they had been with a prostitute.

That’s a slight increase from three years ago, when 49 percent of respondents admitted the same, according to information from the Ministry of Gender Equality and Family Republic of Korea at a prostitution policy discussion forum on Aug. 30.

As authorities have begun cracking down on shape-shifting businesses, prostitution services have expanded online, through Internet cafes and broadcasts, where sex-related content is traded and become commercialized.

More than 10 broadcasts known as beot-bang, which translates to “strip show broadcast” in Korean, are run on each Internet broadcasting site, attracting millions of people each night.

Even during the daytime, more than 300 users were logged in to an Internet broadcast program where the female host sits in a chair wearing revealing clothes.

A chat-room message pops up that reads, “I will dance if you pay me 777 items.”

(Each item, used as a type of Internet currency, costs 100 won, or $0.90) The show’s host and the Internet broadcaster then share the earnings.

As for adult Internet cafes, they are typically surreptitiously operated, allowing only registered users to access the site. Such cafes cannot be found on portal sites.

Yet despite a growing Web presence, an intensive crackdown has been slow going. “I know the situation is serious,” said a representative from the Korea Communications Standards Commission, “but we’ve given up trying to control it because we don’t have enough manpower to handle all those Internet broadcasts.”

“It is impossible to monitor Internet broadcasts 24/7,” a police official added. “We will crack down if we receive a report, but those cases are rare.”

But perhaps what has become most apparent since the special law’s passage is the shift in the public’s perception of prostitution as a result of the act’s implementation, experts argue.

Others, however, have pointed to the law as useless overall and questioned its effectiveness.

“While the sex industry swells, the number of people apprehended for illegal prostitution-related activities is decreasing,” said Lee Na-young, a sociology professor at Chung-Ang University. “That indicates that there is a problem with law enforcement and that the applications of the law are low and ineffective.”

In 2009, 76,000 people were apprehended for their involvement with prostitution under the law. In recent years, however, that number has hovered around 10,000.

Business owners are typically sentenced to up to three years in prison or fined 30 million won. In most cases they end up paying a fine, which often perpetuates the cycle of relocating their business from place to place, or even underground or online.

Whether the special law violates the constitution has also been a source of controversy.

One woman who was arrested in connection with prostitution last January requested a ruling on the constitutionality of the law, claiming that consensual prostitution should be allowed, since it falls under an individual’s right to self-determination.

“Because the special law made all sex work illegal, it has become a violation of human rights, cornering sex workers and forcing them to live in poor residential environments,” said Sa Mi-suk, an activist with an organization that supports sex workers’ rights.