After-school classes a hit with parents

After-school classes a hit with parents 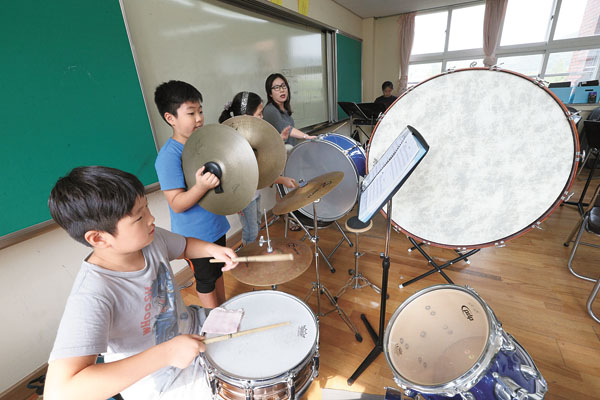 Jangan Elementary School students practice playing the drums during an after-school program Sept. 15. The scheme includes 16 music classes where pupils study instruments such as violin and cello. By Shin In-seop


Jangan Elementary School in Seongnam, Gyeonggi, was full of students last Monday afternoon, even though regular classes had ended.

“I want to learn how to cook and help my mom while she cooks,” said 10-year-old Lee Eun-ji at a laboratory where 20 students had gathered to make a New York-style hot dog.

“Like my dad, I want to be a great cook when I grow up,” said eight-year-old Kim Do-won, who was busy chopping pickles and filling a bread roll with a sausage.

In another class, seven students were in the middle of making a robot. The lesson’s main theme was on preserving strength.

“What will happen if I pull the two rubber strings outward in opposite directions?” asked teacher Gwon Hyeok-jun while holding up a robot assembled out of blocks and rubber string.

“They will strain,” one student said. “They will go back to the original place,” said another.

Jangan Elementary School provides 143 after-school classes, including on Saturdays, on topics such as languages, cooking, science, sports, music and calligraphy. Students take two to three classes a week on average and more than 80 percent attend classes after school.

A unique part of Jangan elementary school’s after-school program is the active involvement of parents.

“Parents can participate in five classes,” said Jo Mi-young, a teacher in charge of Jangan’s afterschool programs. “Among the five classes, some parents volunteered to teach the table tennis and badminton classes for free.”

Principal Song Geun-hu, who has been the school’s chief since September 2012, gave a 91-member parents’ group the authority to select and manage classes and hire instructors.

Song had consumer-centered education in mind when he planned the after-school program.

“The quality of classes is guaranteed because parents select classes and instructors for their children,” said Moon Jae-in, head of the parents group.

Community cooperation was another factor that led to the program’s success. Local businesses donated 400 million won ($382,117) of the scheme’s budget.

According to research conducted by the Gyeonggi Provincial Office of Education, students at Jangsan now pay less for private education outside of school, declining from 476,200 won in 2012 to 283,000 won in 2014. During the same period, parental satisfaction of after-school programs climbed from 78.4 percent to 91.1 percent.

“To raise a single kid, the whole community needs to cooperate,” Song said. “Thanks to active support from parents and the local community, we could implement a good after-school program.”

Other schools said after-school programs give hope to students from low-income families. According to a survey of 300 parents of Jeonnam National University Middle School students, 98 percent answered that they paid for less private education for their children since signing them up for after-school programs.

“We have diverse classes such as basic engineering study and fashion design,” said Lee Seung-hee, a teacher at the school.