Right to left; “Gan-seo-chi-yeol-jeon” (2014) or “The Search for Battle” Tells the story behind Hong Gil-dong, a fictional heroic outlaw from the Joseon Dynasty (1392-1910).;Aftermath (2014) Centers on a teenage boy who has supernatural powers. Features Kim Dong-jun, left, a member of the boy group ZE:A. ;“After School Luck or Not” (2014) Produced to promote five new actors. Based on the success of the first season, the second is already completed and the new installments will be released on the same day in Korea, China and the United States.;“The Craving” (2014) Created by Yun Seong-ho, who is a first-generation producer of web dramas in Korea. It is about the life of a single woman.

As part of “snack culture,” a newly coined term that refers to easy-to-consume web content, Internet dramas were first produced for promotional purposes by private companies.

These videos ranging between six to 10 episodes with a running time of five to 20 minutes are only available through sites such as YouTube or social networking portals.

Riding on the popularity of short drama series, A-list production companies and major entertainment agencies are jumping into the ring to create these mini-dramas. 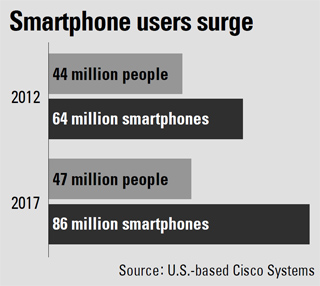 Naver, the country’s largest web portal, which claims nearly 70 percent of the market share, has opened a segment for web dramas under its TV Cast service.

And even K-pop groups are appearing in these brand-new dramas, using them as stepping-stones to help them transition into acting careers.

Min-ah of Girl’s Day and Ji-yoon of 4Minute both recently appeared in an Internet drama.

More than 20 new web shows have poured in since last February. Of these, “After School Luck or Not” and “Aftermath” are two that proved the potential of the phenomenon, becoming the next big thing in the mobile content market.

Centering on the story of an after-school club with five handsome high school boys, the fantasy-romance drama begins with a scene in which an introverted girl is invited to join their inner circle. She receives an invitation delivered by a dove and visits the club without hesitation because “she has never been invited to anything by anyone.”

A sense of kitsch flows from the drama’s very first scene when the production team of “After School Luck or Not” uses a shoddy plastic bird instead of an actual dove.

The 12-episode drama was originally produced in order to promote five rookie actors, but its popularity shot up - earning an unprecedented 10 million views on Chinese website Sohu.com.

U.S.-based streaming site DramaFever recently bought the copyright to “After School Luck or Not.”

Based on the huge success of the first season, production of the second has already finished.

“Aftermath,” based on a teenage boy with supernatural powers, was another Internet hit this year.

When the accumulated views of a single web series go beyond 1.8 million, it is considered a hit, according to industry insiders.

Since this new form of entertainment targets a younger demographic, the dramas tend to touch upon everyday issues like romance, food and single life.

Some stories take place in the office or tell stories of college graduates who are struggling to find employment.

The dramas also function as a test bed for new writers and producers.

“It takes between about 200 million [$192,000] and 300 million won in production costs to make a single music video,” said a producer who wished to remain anonymous.

“But [these companies] see a series of web dramas as more effective than producing a single music video in terms of cost.”

The average cost to create one season of a web series is similar to the production cost of a single music video or a single episode of a 60-minute, full-length drama.

In addition, Internet dramas are freer from product placement than classical drama series.

Along with the three entertainment agencies, Sidus HQ, which produced the hit TV drama series “Deep-Rooted Tree” (2011) and “The Innocent Man” (2012), is also trying its luck.

What differentiates “Love Cell” from other similar dramas is its stellar cast.

Ji-hyun, another member of girl group 4Minute, is also in the web series.

The drama is an adaptation of a romance webtoon, or an online cartoon series, of the same title.

“I consider it a challenge that is different from films and drama series because the time that is given to me is a few minutes,” said Jang, who plays a supporting role in “Love Cell.”

Each new episode is uploaded at midnight every day and viewers are able to watch the next episode in advance if they pay for it.

As the first to enter this market among the country’s three major broadcasters, KBS, the state-run TV channel, got experimental when it began to dabble in the new genre.

KBS recently produced “Gan-seo-chi-yeol-jeon,” or “The Search for Battle,” the background story of Hong Gil-dong, a historical fiction character who is the Korean equivalent of Robin Hood.

The drama came in two formats: one with seven episodes and the other in a more traditional television format.

Prior to the official airing of the single-episode drama on KBS, the production team split the 70-minute show into seven episodes and uploaded the first six onto Naver TV Cast.

After promoting and attracting viewers with the initial six episodes, KBS ran the very last installment after the full version hit TV screens.

Upon the release of the first episode on Oct. 13, the web drama series attracted 600,000 views within six days.

China was the first country to pay attention to web dramas.

The Chinese audience was in need of something new instead of the typical period dramas or dramas with a heavy dose of propaganda the country was used to.

The answer was web dramas.

Since these short programs are streamed not only through the Internet but also inside subways and on buses in China, they are dubbed “the new generation of dramas.”

Actor Kim Bum’s “V Love” online drama series, which was produced in China, has attracted 60 million views as of Oct. 12.

“Performances by the K-Tigers are really popular on YouTube,” said Shim Sang-min, a professor of media communication at Sungshin Women’s University, referring to a performance group that combines taekwondo, acrobatics, break dancing, K-pop and jazz.

“I hope to see various attempts by web dramas in the near future just like K-Tigers do,” Shim added, explaining that these Internet-focused works have more room to be experimental, just like other web content productions.

Producer Yun Seong-ho, who is the creator behind hit online drama series such as “The Cravings” and “Sseom-nam-seeom-nyeo” said, “Web dramas offer experience similar to watching films because they enable viewers to have one-on-one intensive watching.”