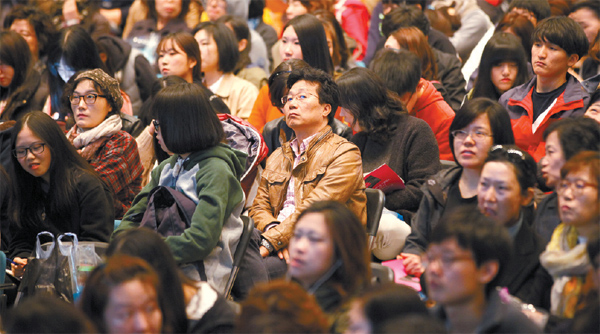 Around 250 fathers attend a session on Nov. 8 about college admissions organized by MegaStudy, an online private education company.Provided by MegaStudy


About 3,800 parents and students eager to get tips on how to get into a good college gathered for a briefing hosted by MegaStudy, an online private education company, at 2 p.m. on Nov. 8 at Ewha Womans University.

Some fathers typed on their laptops as they watched the presentation, trying to keep their eyes open despite obvious sleepiness. Others took notes and whispered to their kids to ask questions about confusing issues.

“I didn’t want my daughter to say to me, ‘You try to educate me without knowing anything,’” said Kim Seok-jin, who came to the session with his daughter, a sophomore in high school. 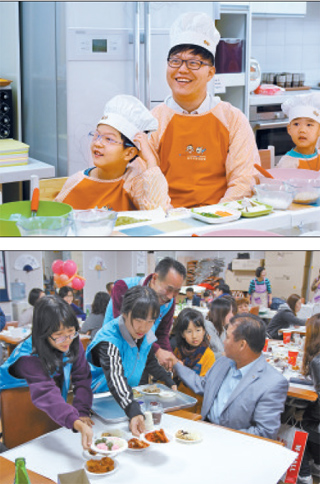 “Maybe I won’t be given a pin-point strategy for college admissions, but I wanted to communicate with my daughter in this way.”

Helicopter moms are widely known for being overzealous about their kids’ educations. In Korea, they’re known as “Gangnam ajumma,” in tribute to all the hagwon in the Gangnam area of Seoul. Now the zeal has started to spread to dads, who for decades tried to avoid getting involved with the whole messy business. There’s even a nickname for the new breed of fathers: “Friendy,” a combination of the words friend and daddy.

And the most “friendy” thing a dad can do is to get up to speed on tests, hagwon and the arduous task of getting into college.

Park Seong-cheol came to the MegaStudy briefing on his own, hoping to catch up on college entrance issues that his son and wife already know.

“The time when a father’s indifference was considered a virtue is over,” Park said.

Nam Yoon-gon, head of the college entrance research center at MegaStudy, said about 30 percent of the people who come to strategy briefings following the College Scholastic Ability Test (CSAT) are fathers.

“We often hold briefing sessions on the weekends or on weeknights to work around fathers’ schedules,” said Nam.

Kim Jong-woo, a college consulting director at Yangjae High School, said more and more fathers are asking for consultations about the college prospects of their kids.

“I have received calls from fathers who say, ‘I will come to the school after work, so please wait,” Kim said.

“And when the College Scholastic Ability Test finishes, many fathers visit schools to ask for an analysis on what universities their kids can go to.”

Associations that encourage fathers’ involvement in their kids’ education have flourished over the recent years. The Fathers’ Association at Singok Elementary School in Gangseo District, western Seoul, is one.

On Nov. 8, 60 fathers from the association wearing matching vests served tea at an office of the Korean Federation of Community Credit Cooperatives in Gangseo District. The one-day teahouse, which attracted about 300 customers, was an extracurricular activity to raise donations to help make kimchi for the winter. The federation has been involved in such kimjang volunteering for 15 years, and the students help out.

“The children who delivered kimchi to poor neighbors used to say they never realized there were such poor neighbors,” said Jeong Yoon-soo, head of the Fathers’ Association, which also takes kids to museums or mountains every Sunday.

“A father is the first male who teaches love to a daughter and a mythological being to a son who represents masculinity,” said Kim Yeong-hun, a professor in the department of pediatrics at the School of Medicine of the Catholic University of Korea.

“Education without a father is lame.”

Experts say mothers should support fathers in their desire to get involved in the educations of their kids, and shouldn’t promote stereotypes that they know better than their husbands.

“Mothers usually know much more about their kids, but not all the information they know about their kids is correct,” said Kim Hee-jin, a professor of early childhood education at Ewha Womans University.