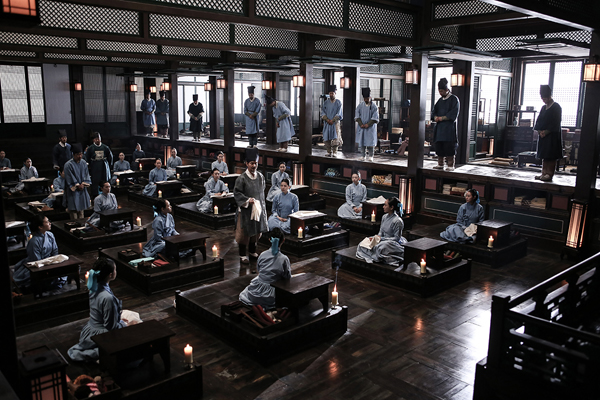 Director Lee Won-suk’s costume movie “The Tailors” takes viewers into the very core of sanguiwon, an atelier that dealt with the royal family’s medicine and clothing during the Joseon Dynasty (1392-1910). Provided by the distributor

Beautifully crafted hanbok, or traditional Korean clothing, has appeared numerous times on screen, but no domestic film or drama has shed light on how royal garments were created in the past.

In the upcoming film “The Tailors,” directed by Lee Won-suk, viewers are taken into the very core of sanguiwon, a palace atelier in the Joseon Dynasty (1392-1910) that dealt with the medicine and dress of aristocrats.

For the first time on the big screen, viewers will be able to peep at how royal attire was made in the atelier while also being privy to the power struggles happening within its walls.

Veteran actor Han Suk-kyu plays Dol-suk, the head of sanguiwon, which is also the name of the film in Korean. 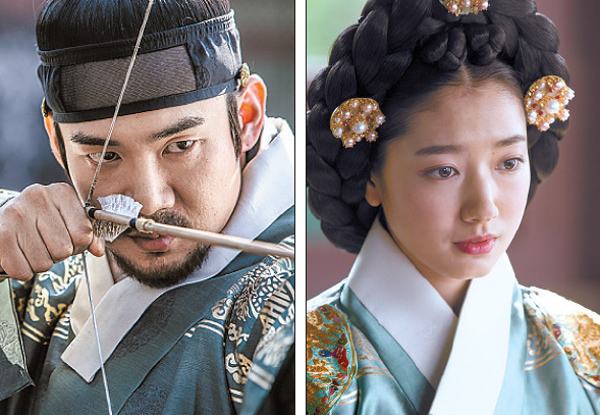 Actors Yoo Yeon-seok, left, and Park Shin-hye wear hanbok with a modern twist, which provides attractive visuals for “The Tailors.” Provided by the distributor

Dol-suk was born a commoner but is looking forward to upgrading his social status after serving the royal family for 30 years.

However, the hard-working artisan is soon threatened by free-spirited clothier Gong-jin, played by Ko Soo.

“The Tailors” is Ko’s first foray into period dramas throughout his 15-year acting career.

In the movie, Gong-jin captivates the whole palace, including the king (Yoo Yeon-seok) and queen (Park Shin-hye), with his expertise at creating unconventional hanbok.

Even the slightest hint of the young designer’s imagination can turn a plain-looking hanbok into a colorful, sometimes seductive, dress.

The hanbok that are used is one of the film’s most powerful factors. The vivid and glittering embroidery of actress Park’s hanbok captures attention on the screen, providing a number of breathtaking visuals to viewers.

Acclaimed designer Cho Sang-kyung was in charge of the costumes for the movie. It is said that she was inspired by the Yeongjo period (1694-1776 ), where a short jeogori, the jacket that sits on top of the dress, and jar-shaped skirts started to become fashionable, according to historical records.

Park, who wears more than 30 hanbok in the movie, said that the filming was a pleasurable experience because of her fondness for hanbok.

“In a royal banquet scene, the queen wears a hanbok resembling a wedding dress that has an elegant and beautiful look,” said Park during a press screening event on Wednesday.

It took 3,000 pearls and beads to craft the costume Park wore in the scene.

“The Tailors” is the actress’s official debut in a period movie.

“I focused on trying to express the lonely queen who doesn’t have any one to depend on in the palace,” said Park regarding the several emotional scenes shown in the movie.

“As a part of trying to show the loneliness, I took away unnecessary facial expression in the tearful scenes. I heard some comments that overly frowning faces disturb viewers.”

The movie rolls out in local theaters Dec. 24.