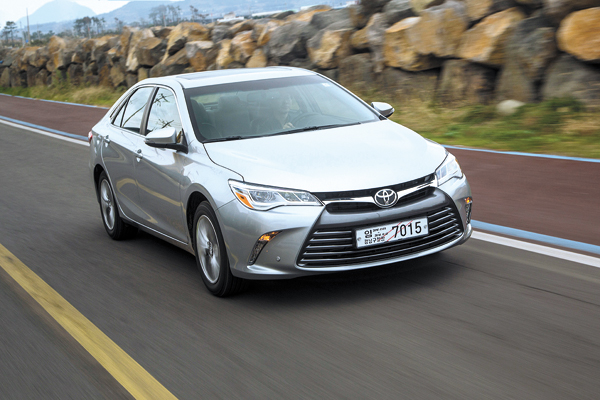 The popularity of imported cars has been growing in Korea, but most of the best-selling models have been SUVs and large sedans such as the Volkswagen Tiguan 2.0 TDI and BMW’s 520d sedan. That reflects the prevailing idea that only rich people can afford fancy imported cars.

But since Toyota, Japan’s leading automaker, has introduced the reasonably priced 2015 Smart Camry with safety options and a sporty design, Koreans seeking a midsize sedan in the price range of around 30 million won ($27,000) see it as a good alternative to Hyundai’s LF Sonata and Kia Motors’ K5, which have both dominated the country’s midsize sedan market.

“With this new Camry, we wanted to develop a car that has the best overall quality, including design and driving performance, and to offer our vehicle at a reasonable price,” said Toyota Korea in a statement.

Since the model was first unveiled in the New York Auto Show in April, it was considered the most innovative car among Toyota’s recent models. The company said it has created, changed or redesigned more than 2,000 parts that were used in its predecessor, the seventh-generation Camry that was developed two years ago.

The most notable change is its exterior design. The new model adopted the front billet and mesh grilles used in Toyota’s large Avalon sedan and its LED headlamps complete the model’s sporty front. Toyota decided to install two low- and high-beam LED lamps and removed the fog lights.

The model’s body grew 45 millimeters (1.7 inches) and the wheel tread was widened by 10 millimeters to make it ride more like a large premium sedan.

Toyota also tried to minimize the interior noise for the Camry, saying it tried to improve the overall design to successfully block outside noise that penetrates through windows and doors and interferes with passengers talking. It also used new carpets that can absorb 30 percent more noise.

The overall safety and driving performance were upgraded as well, along with the suspension for both front and rear wheels along with the quality of the steering wheel. Toyota also offered some fancy options that were previously only offered in premium sedans, including a 4.2-inch multi-information thin-film-translator (TFT) LCD display, 10 air bags and a JBL premium sound system. The TFT LCD display provides the vehicle’s general information, including tire pressure, navigation and audio entertainment. It is installed in all Camrys as a basic option.

Such features will appeal to Korean consumers who might have grown tired of Korean models such as the Hyundai LF Sonata, Kia K5 and Renault Samsung SM5.

Industry insiders are carefully monitoring the competition between the Camry and Hyundai’s all-time best-selling sedan, the Sonata. Their race in the U.S. market is already pretty close.