Frosh hit books by writing them

Frosh hit books by writing them 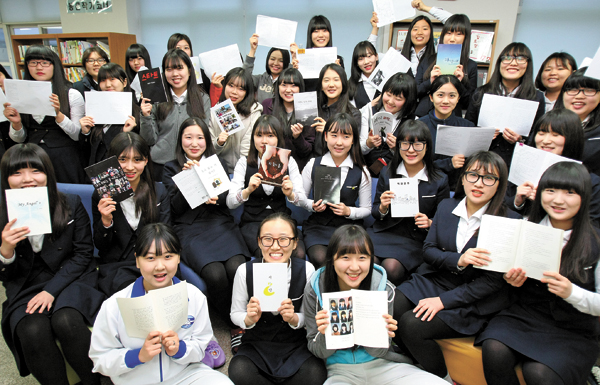 Freshmen from Gyungbuk Girl’s High School hold up their own books on Dec. 16 at the school library. The students have self-published about 300 books this year. By Gong Jeong-sik

Park Ji-yeong, a freshman at Gyungbuk Girl’s High School in Daegu, was talking to Lee Joo-yang, her Korean teacher, at the school library on Dec. 16 about a newly published book.

“Isn’t it awesome?” Park asked Lee, showing her the book.

The title of the 60-page book was “A Handful of Earth,” which is about how a handful of earth can be turned into ceramics, like a plate, that are useful to people. The author: Park herself.

“It was not easy taking the initial step to write a book,” Park admits. “But now I feel fulfilled.”

That’s a satisfaction she can share with all of her fellow freshmen at Gyungbuk Girl’s High School.

By the end of the year, the number of books published by the 437 freshmen will be around 300, and they range from fairy tales to novels and biographies of great people.

Some students like Park write on their own, others write in collaboration. The size of the books range from 60 to 120 pages. The book are published by a local printer and the cost, which ranges from 10,000 to 20,000 won ($9 to $18), comes out of the students’ pockets.

The books are the fruits of a year-long-effort.

To write her novel, “The Last Trial,” Yoon Seong-hyeon visited courts throughout the summer. The novel is about a mother’s revenge after her daughter was raped. Yoon thought she needed to learn the actual atmosphere in courts to write the story.

“I have wanted to become a prosecutor,” Yoon said. “So I decided to write a trial novel and the experience brought me an opportunity to think deeply about the law and justice.”

The book writing project was begun by kids who were freshmen in 2010. Students and teachers were brainstorming for an activity that would be fulfilling for the students.

Teachers and students agreed that the idea of writing a book was good in an era when many young people restrict themselves to writing in short bursts on social media.

The writing is done during a creative activity class for an hour every week, but many students write in their own time as well.

The students first came up with a tentative title for their book, and a framework for the story was worked out in a group discussion with the classmates. Once the outline of the story was set, the students collected materials, which was mostly done over the summer break. Photos to be included in the story were selected.

First drafts were completed by October followed by edits by classmates. For the final edits, five teachers in charge of the project went over the manuscripts.

In the five years since the tradition began, 1,900 books were published by freshmen of the school.

There were obstacles, however.

Parents criticized the project, saying, “What is the point of writing a book when it has no bearing on scores on the College Scholastic Ability Test?”

There were also some students who complained about the writing, claiming it exhausted them.

But after being told that the book writing could inspire them to go into certain careers, many students came around to the idea.

Lee Su-jin, who dreams of being a kindergarten teacher, was one.

Lee wrote a fairy tale book, “Who Am I?”

“After writing the book, I feel like I can be a teacher who will better communicate with my future students,” Lee said.