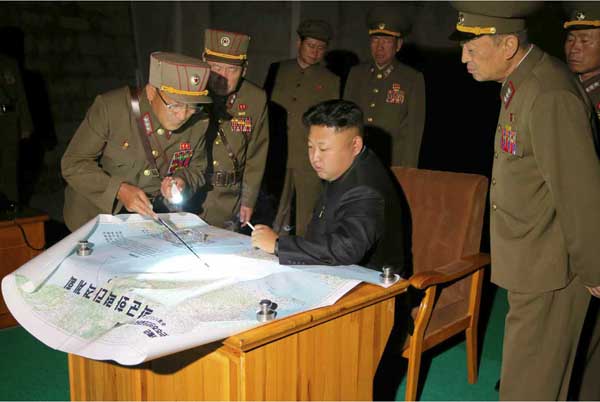 North Korea has a new war plan to complete a Southern invasion within a week using asymmetric capabilities including nuclear weapons, a high-profile defector and South Korean government officials told the JoongAng Ilbo.

The war plan was created less than a year after Kim Jong-un assumed power, a South Korean official told the JoongAng Ilbo quoting a defector who used to serve in a senior position in the North Korean military.

According to the official, Kim Jong-un hosted a top military-party meeting in Wonsan on Aug. 25, 2012, and approved the new war plan. The young ruler became the supreme commander of the North’s Korean People’s Army on Dec. 30, 2011, shortly after the death of his father, Kim Jong-il. 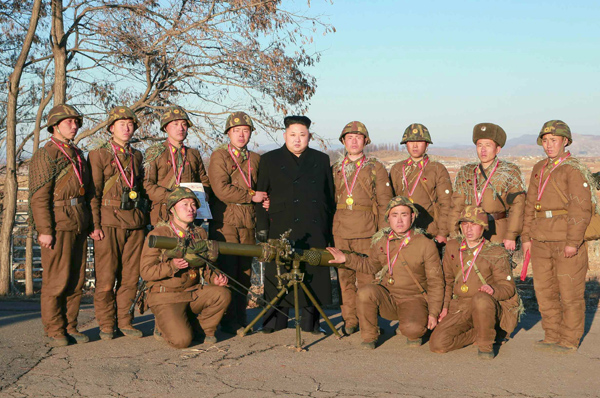 “In addition to Kim Jong-un, all members of the Central Military Commission of the Workers’ Party and the top brass of the military who command a unit larger than a corps attended the meeting,” the former senior official of the North Korean military was quoted as saying. 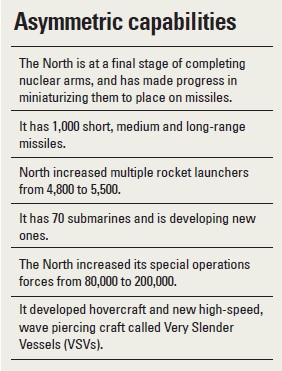 “At the meeting, a larger framework of the operations plan created by the [General Staff Department of the] Korean People’s Army was determined. Kim then ordered that each commander of a corps create detailed operations plans for their units based on the war plan and conduct exercises.”

South Korean intelligence authorities confirmed the creation of the new war plan by the North.

Following the Wonsan meeting, Kim held three more similar conferences to check on the progress and frequently visited military commands and units to have site inspections, sources from the intelligence communities said.

“We received similar intelligence in the past,” said another senior government official. “Recently, we obtained credible information and we are at the final stages of analysis.”

According to government sources, the South Korean military is coming up with an updated operations plan that reflects the North’s new war plan. The South has a Korea-U.S. Combined Forces Command basic war plan, known as OPLAN 5027. It guarantees U.S. reinforcements for the South in the event of an external armed attack, primarily from the North. The war plan has gone through several modifications over the decades.

Sources told the JoongAng Ilbo that the new North Korean war plan can be summarized as a “seven-day war.” Should the North start an invasion or should a localized battle become an all-out war on the peninsula, the North intends to occupy the entire South Korean territory within seven days before U.S. reinforcements arrive.

It also contains a plan to conclude the war within 15 days at most if the North cannot end the war within a week due to resistance by the South and U.S. Forces Korea.

Under the new war plan, the North plans to use asymmetric capabilities including nuclear weapons and missiles to forestall South Korean and U.S. troops in the early stage of war. Special operations forces, which were increased from 80,000 to 200,000 in the last few years, will be mobilized next and conventional weapons such as tanks, artilleries, fighter jets and ground forces will be used later to conclude the war, according to the plan.

Sources said Kim ordered the military to complete preparations for a war by 2013, but the deadline was extended one year. This year was declared as the “year of a great war for unification,” the sources said.

“After Kim took power, the North conducted a series of long-range missile firings and carried out its third nuclear test. It also developed new weapons and reinforced military drills,” a government official said. “While Kim Jong-il mobilized the military to rebuild the economy, Kim Jong-un ordered massive military drills frequently and bolstered arms capabilities because of this new war plan.”

North Korea’s third nuclear test was in February 2013, and last year it carried out 18 test firings of 108 missiles. A military exercise also took place to prepare all front-line units to occupy the South’s guard posts at the border. An airborne drill was carried out with 12,000 special forces and an AN-2 low-altitude parachute drop aircraft.

The latest Defense White Paper by the South, released on Tuesday, also illustrated the North’s concentrated investments in asymmetric capabilities.

Military and intelligence officials said the young ruler in Pyongyang has concluded that his impoverished Communist country cannot win a war against the advanced capabilities of the South-U.S. Combined Forces with conventional troops.

“An arms race became impossible for the North since the mid-1990s due to its perennial economic hardships,” a senior South Korean military official said. “It turned to a strategy of beefing up its asymmetric capabilities because they are less costly, but far much more effective.”

Another intelligence official told the JoongAng Ilbo that the new war plan was an outcome of analyzing the latest U.S. military operations. “The North did thorough analyses of the wars in Iraq and Afghanistan,” the source said. “It concluded that it won’t have a chance if a war drags on. To end it quickly, Pyongyang reached a decision that asymmetric warfare is the only answer, despite the pressures and condemnations of the international community.”

The young ruler’s aggressive investment in asymmetric capabilities may have a domestic purpose, other experts said.

“As a new leader, Kim is trying to boost the morale of the people,” said Shin In-kyun, head of the private think tank Korea Defense Network. “By showing off nuclear weapons and missiles, he probably intended to present a rosy picture to the people that the North can stop a U.S. invasion.”