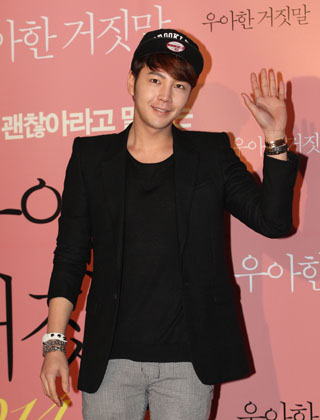 Jang and the show’s production team decided to edit the actor out of episodes that have already been shot because of a tax evasion scandal he was recently involved in.

“It is not a fault of Jang but a mistake made by his agency, and all the omitted taxes have been paid,” the agency stated.

“Whatever the reason may be, my name was in the middle of the controversy and I wanted to say sorry for that,” Jang wrote. “It was a challenge for me to shoot in the village and the time I spent there is valuable to me.”

The actor also apologized for letting his fans down.

“I know you had high expectations for the show, so I feel so sorry for you and I feel so small,” he said.

“I will take the time and will visit Cha Seung-won, Yoo Hae-jin and all the production team to say sorry.”

Jang was one of three hosts of the show, which is a spinoff of “Three Meals a Day,” along with actors Cha and Yoo.

With the sudden departure of Jang, the show’s first episode has been postponed to this Friday.

The production team of “Fishing Village” has decided to substitute Jang with actor Son Ho-jun.

Son left for Manjae Island, the location of the show, on Sunday.