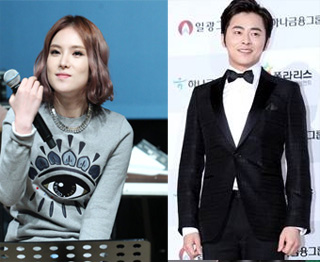 Actor Cho Jung-suk, below right, and singer Gummy have been seeing each other for two years, according to several local media reports that appeared on Monday morning.

After the news was released, the entertainment agencies representing the two celebrities confirmed that they are in a relationship through phone interviews with Ilgan Sports, an affiliate of the Korea JoongAng Daily.

Close friends of the two reportedly said they developed their relationship further because they are both interested in music.

Although Cho soared to stardom in 2012 with the hit film “Architecture 101” he debuted as a musical actor in 2004.

After earning recognition as an actor, Cho has appeared in numerous musicals.

Meanwhile, Gummy, whose stage name means “spider” in Korean, broke into the music scene in 2003 and has sung many hits like “We Should’ve Been Friends” and “I’m Sorry.”

Whenever Cho was in a newly released film, Gummy went to one of the pre-screening events.

Cho recently starred in a rom-com film “My Love, My Bride” (2014), which attracted more than two million moviegoers.