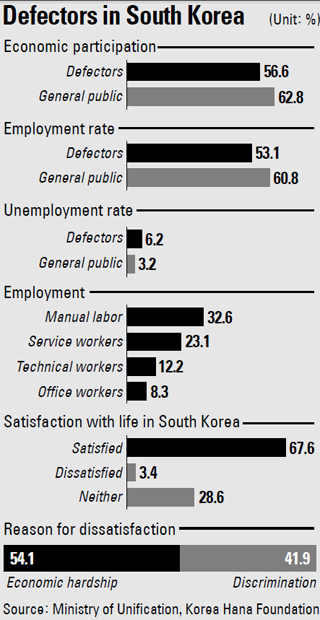 North Korean defectors in the South are working longer hours and receive lower wages, according to a recent survey into their lives. The report, released Monday, showed that 67 percent had expressed satisfaction with their lives in the South, and fewer said that they had experienced discrimination here.

Of 23,141 eligible defectors, 12,777 answered the poll, which took place from July until September. It is the most recent in a series of annual surveys since 2011.

Another survey conducted by the same organizations questioned 744 North Korean youngsters between the ages of 8 and 18, as well as 950 children of defectors who were born in third countries on their way to South Korea.

Among them, 1,111 replied. Additionally, further research polling 1,785 defectors over age 13 was conducted as a sample survey.

The latest survey of the 12,777 defectors showed that the employment situation for defectors here has improved slightly, though they continue to struggle.

The survey, however, stressed that income disparity must be taken into account, considering the difference in the average number of years on the job. In 2013, defectors had employment records in South Korea dating back an average of 19 months, while most South Korean workers had an average of 67 months in their chosen careers.

The survey added that government policies to support employment among defectors have had some noticeable impact. A special program to help defectors find work at midsize companies and expanded vocational training at the second Settlement Support Center for North Korean Refugees, known as the House of Unity - a shelter designed to help defectors adjust to life in South Korea - were credited to the improvement.

In 2013, 35 percent of the defectors surveyed received government financial aid to meet the minimum standard of living, though that figure dropped to 32.3 percent in 2014.

The 2014 survey showed that 67.4 percent of the defectors said they are satisfied with their lives in the South. It remained nearly similar to the figure in 2012 at 67.4 percent.

Additionally, 74.7 percent of the defectors said they had not experienced any discrimination over the past year because of their status, though 25.3 percent acknowledged that they were still mistreated because they came from North Korea.

The survey also showed that defectors are particularly interested in their children’s education, and 76 percent said they want their children to complete at least a four-year university education. Nearly 68 percent of the defectors said they are satisfied with the education system - far higher than the general public’s 49.7 percent.

The additional survey with the youngsters showed that they were particularly satisfied with the South’s education system, although many of them said they were having difficulty catching up with the curricula.

According to the survey, 69.1 percent asked for extra tutoring.

Among the young people, 66.4 percent said they want to graduate from a four-year university, similar to South Korean students.

The poll also stated that 58.4 percent of the young defectors were hesitant about identifying themselves, up by 4 percentage points from the previous survey in 2012.