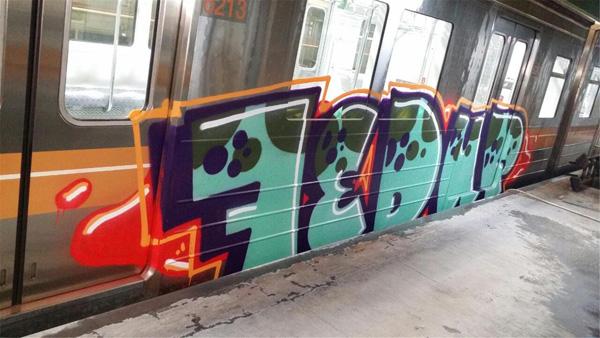 On Feb. 2, four Australians in baseball caps and hoodies appeared around Wangsimni Station, eastern Seoul, at three in the morning. They carefully scoped out the area and then stopped in front of a ventilation window behind a bus stop. They cut the bars of the window and swung down to a temporary garage where a car for the Line No. 5 subway was idle.

Using spraypaint, they covered the car with graffiti art and then moved on.

Two days later, they penetrated Anam Station, northeastern Seoul, and left graffiti that read “FEDUP” in giant letters on a subway train. The following day, the four men did the same thing at the Sinnonhyeon Station on Feb. 5, leaving the declaration “ERROR” on a Line No. 9 train.

It was only after they flew back to their home country on Feb. 7 that the police identified the four Australians with security camera footage. They matched their faces on security footage from the airport and then checked immigration records.

The four men were found to have spent 10 days in Korea - dedicating at least three of those nights to spraypainting Seoul subway cars.

“We don’t understand how foreigners who never traveled to Korea before knew so expertly the subway stations’ structures,” said Shim Mun-sik, chief of a crime investigation department of the Seongdong Police Precinct.

And there have already been four cases this year, three by the Australian group. The most recent case was at Geumjeong Station in Gunpo, Gyeonggi, on Feb. 13. The police said it featured the word “CRUDE,” which is believed to be the artist’s or artists’ signature. The perpetrators have not been identified.

“We believe most of them were painted by foreigners,” said Kim Hyeon-mo, an officer of the Korea Railway Police. “And we discovered that most of them are from Australia or Canada based on the style of graffiti paintings.”

Why do it in Seoul?

Lim Hun-il, a pioneering Korean graffiti artist better known as Hudini, explained that “seeing a train running around the city with their graffiti art on it is like the biggest honor.”

Another graffiti artist conjectured, “It is likely that foreigners who used to practice graffiti art are working as English teachers during the day and painting at night.”

No foreigner has been caught by police for defacing the trains, possibly because they have left the country quickly like the Australian group. Property damage is not a serious enough crime to try to extradite them.

“It appears that the designs of our subway stations have been spread among foreign graffiti artists,” said Kim, “because the graffiti is being done in certain stations such as Wangsimni Station [four times] and Geumjeong Station [three times].”

The Seoul Metropolitan Rapid Transit Corporation, which is in charge of managing Subway Line Nos. 5 to 8, re-welded bars on ventilation windows of all 157 stations on the four subway lines and reinforced locking devices on garages.