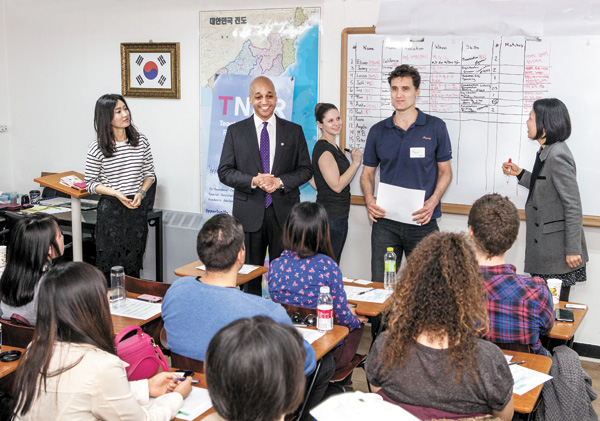 
A North Korean defector who asked to go only by his English name, Ken, recalled graduating from college and later volunteering to join the military.

Unlike most of his fellow countrymen, whose service is mandatory, he explained he was exempt, for a reason he wished not to specify.

“Sometimes I think I’m crazy. For 10 years!” he said in broken English, explaining that he couldn’t understand how he convinced himself to sign up in the first place.

Having spent a decade - his entire 20s - in the North Korean army, he was quick to add that he had been resolute when making the choice.

“North Korean broadcasting had been brainwashing me from the time I was 1 years old until I was an adult. I had to be loyal to the Kim family,” Ken added, referring to the reclusive state’s ruling dynasty.

His affiliation with the military was his way of showing he was part of this unconditional personality cult, he said.

As the 35-year-old told his story, Canadian national Amelie Lacroix, who teaches English to kindergarten and elementary school students here, listened with widening eyes and occasional expressions of shock.

“For 10 years? Were you aware you’d be serving that long? How was it?” she asked, leaning toward Ken from across a coffee table at a three-story cafe in Jongno District, central Seoul, as if to coax him into speaking up.

In a blunt tone, Ken answered: “I was extremely hungry. The government provides 700 grams of rice every day, but other organizations and other higher-rank officials take it and take it. Maybe if I’m lucky, I get 400 or 550 grams per day. But only rice. No side dishes.”

The pair, who spoke over a cup of hot americano and imported chocolate-banana cookies, both belong to the Teach North Korean Refugees (TNKR) project, which matches defectors with volunteer English tutors.

Co-founded in March 2013 by Lee Eun-koo and Casey Lartigue, the group has so far directly matched more than 170 defectors and 240 teachers, the latter mostly foreigners teaching English at local schools or private academies.

The program consists of two tracks: In Track 1, titled “Finding My Own Way,” refugees are matched with tutors who help them to generally improve their English; while Track 2, also “Telling My Own Story,” supports refugees seeking to become public speakers and links them with coaches who help them with self-expression.

Ken and Lacroix’s lesson last week was their first Track 2 session after having been introduced to each other a week earlier through TNKR.

“In university, I studied international relations and modern languages, so it’s really interesting to be close to North Korean issues [through this program] and to see how such people lived under such a [Communist] regime,” said Lacroix, 23.

TNKR typically holds monthly matching sessions for each track, in which a group of defectors and tutors gather to introduce themselves and select their partners.

Seven refugees and 10 tutors are chosen for a session in the order they submit applications and pass screening procedures. A waiting list can hold up prospective participants for a couple months.

Before the matching session, the TNKR staff hosts an advance orientation session with selected tutors to hand out basic instructions. Their resumes are then distributed to the refugees so the students can preview their candidates.

In order to be matched with a defector, participation in both the orientation and matching session is compulsory.

At a matching session, tutors introduce themselves one by one, highlighting a preferred time, location and their teaching skills, followed by the refugees, who do the same. The students then take turns selecting as many teachers as they want and exchange contact information to set up their first lesson.

“Koreans can join as teachers, too,” said Lartigue, who works as the director of international cooperation at Freedom Factory, a local think tank. “Some refugees can’t speak in English and want bilingual teachers.”

The matched pairs are required to meet a minimum of twice a month, 90 minutes each time, for three months at agreed upon locations like coffee shops. To make sure no one slacks, the TNKR staff asks everyone to submit short reports after each lesson.

“When we first started, we weren’t monitoring, and the result was that they never contacted us,” said Lartigue. “There were some problems, such as classes being canceled.”

One way to get around that, he added, was to allow the defectors to choose more than one tutor so that they could bounce between different tutors and choose whoever fit best with their schedule.

In terms of qualifications, the staff “typically lets everyone through,” and then allows the students to do their own screening later into their lessons.

The staff warns foreigners beforehand, however, to never get too involved in the defectors’ stories unless the refugees initially speak up.

“She was reading her script, and then suddenly stopped to say, ‘Ah, it’s really hard for me to keep thinking about this.’

“I felt guilty because I kind of felt a bit detached. For me, it was like reading a book, to hear her say she hasn’t seen her brothers for a long time, and that she hopes they’re safe and that they can meet each other again.”

The 42-year-old, who said he joined TNKR out of sheer interest about totalitarian regimes and to help North Korean defectors adjust to their new lives, added that he wished to fulfill his humanitarian goals via the program.

“This is just one way of helping out. You can’t always change the world but you can have an impact on an individual,” he said.

One 23-year-old college student, who defected to South Korea in 2011 and declined to give his real name, said TNKR was a shot at a “normal life.”

“In order to get adjusted to the South, refugees must fill their minds with so many things they were restricted from in the North,” he said.

“English is an essential tool to live here, and joining TNKR, you can meet so many people from so many different backgrounds,” he continued in Korean, adding that the cosmopolitan vibe enabled defectors to broaden their prospective toward a world from which they were once completely shut out.

Lacroix, the Canadian, admitted that her parents expressed a little displeasure when she first told them she wanted to join the group.

“They said ‘Oh my God, be careful.’ Because it’s a normal Western reaction to think that North Korea has such an oppressive regime, and that it can affect people.”

Anxiously eyeing Ken - whom upon hearing her comments burst into laughter and joked, “What? I’m innocent!” - she added that her first lesson went much smoother than she had imagined.

“I think people are the same, and he has good intentions. I don’t worry,” she said.