Of tombs and posthumous names

Of tombs and posthumous names 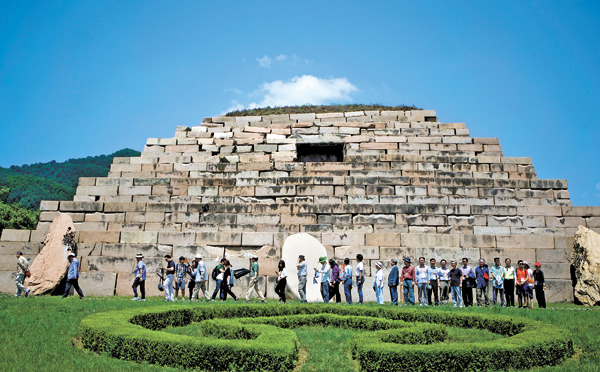 A team of 31 Korean leaders in politics, the media, culture and academia circles a massive stone tomb named Janggunchong, also called the “pyramid of the East” in Ji’an, Jilin Province, northeastern China. To build it, some 1,200 stones were moved from the Onyeobong Peak quarries over the course of 15 years. By Kwon Hyuk-jae

*This year marks the 70th anniversary of the division of the Korean Peninsula, and to contemplate the meaning of this separation and how to reach unification, a group of 31 leaders of society made a six-day pilgrimage to points across China’s border with North Korea on a “peace odyssey.” Starting on June 22, they traveled a distance of 1,400 kilometers (870 miles), stopping in cities and towns in China’s northeastern Liaoning and Jilin provinces including Shenyang, Dandong, Tonghua, Ji’an, Songjianhe, Mount Paektu, Erdaobaihe, Yanji, Hunchun and Fangchuan. The team included former prime ministers, lawmakers, professors, journalists, poets, musicians, doctors and civic activists. Acclaimed novelist Kim Hoon recollects in writing the stop in Ji’an on June 24 and the significance of ancient Goguryeo-era sites.


Along the side of China National Highway 201 (G201), which passes Ji’an in Jilin Province, the summer mountains are lush and green. The brilliant mountain range seems to scream out at the sky. As we wind away from the range, limitless fields unfold before us, and in the distant edge of these fields, again, mountains rise endlessly.

Ji’an is situated at the riverside basins of the Amnok River (Yalu River). Against rugged slopes, fortress capitals of ancient times remain intact along the mountains, glistening in the summer light.

Ji’an’s houses are built of uniform size and shape, and their walls are, in a socialistic manner, also of the same height. There are no advertisements in the village. Each house was painted with Goguryeo-era tomb murals in the shapes of the tamjoko (three-legged crow), Chinese phoenix or lotus. Shapes that are used in tombs decorate the walls of the houses people live in, showing this place has been a stronghold of the early Goguryeo era (37 B.C.-A.D. 668) for 400 years.

The posthumous names of the Goguryeo kings were not yet influenced by a Confucian outlook of the world and reflected a healthy appreciation of life.

“The king passed away in November and his funeral was held in Sosurim, so we will give him the posthumous name of King Sosurim (17th ruler of Goguryeo).” This is the most beautiful passage in the Samguk Sagi (History of the Three Kingdoms). Where is Sosurim? Since it means “a forest where small beasts live,” it could have been a menagerie in Gungnae Fortress (the second capital of the Goguryeo kingdom in present day Jilin).

When Goguryeo kings died, they were buried on the riverside, at the top of a mountain or in a “small forest where the little beasts live,” and the place in which they were buried provided their posthumous name - and gained immortal status.

The people of Goguryeo loved their land and were detail-oriented and practical.

The posthumous name of King Gwanggaeto the Great (20th ruler), however, was not the place of his burial. Instead, it described his life.

Of all Korean kings’ posthumous names, Gwanggaeto is the most factual, overwhelming and dynamic.

King Gwanggaeto died when he was 39 years old. His son, King Jangsu, reigned for 78 years and lived until he was 97 years old. While Jangsu, whose name means longevity, lived a long life, the name reflects a regret for the early death of his father. An epitaph says that under Gwanggaeto’s reign, “The country was wealthy and powerful, and the people were comfortable and the five grains were plentiful.” So when the valiant young ruler died prematurely, the sorrow of the Goguryeo people would have reached the skies.

The King Gwanggaeto Stele is housed in a glass structure. Only when you imagine the encasement gone can you appreciate the full 6.9-meter (22.6-foot) monument made of natural stone roughly carved into a shape, an overwhelming presence jutting out from the fields.

Its letters are inscribed in bold and steady Chinese characters and emanate a strong vitality toward the historic fields. I had a hard time deciding if these words were romanticizing the era’s conquest and carnage, but in the monument’s 1,775 characters, the dust, horses and blizzards that swept over the mountains and streams had been carved into the stone.

Janggunchong, also called the pyramid of the East, is great and majestic. Janggunchong is believed to be the tomb of King Jangsu, and though this story is not supported by actual records, it is located in fields near the King Gwanggaeto Stele.

King Gwanggaeto marched north, and King Jangsu advanced south. Jangsu moved the capital to Pyongyang and died there, but in order to be buried in the native land where his father lay to rest, he may have begun construction of a grave in Ji’an.

While I cannot imagine the funeral procession that led from Pyongyang to Ji’an when King Jangsu’s long life ended, the Gwanggaeto Stele and Janggunchong share a sense of ancient passion.

I wish the relationship of the King Gwanggaeto Stele and Janggunchong could become established for the sake of historic romanticism and to link in death the father and son kings.

Ji’an has some 20 Goguryeo tomb murals. Of these, only the Ohoebun (Five Helmet Tombs) are open to the public. The Oheobun is a group of tombs clustered in one place, and the murals are painted with auspicious beasts and spiritual beings playing instruments and flying through a fantasy land.

There, space transcends reality, and in that space, there once flowed music, dance and time.

In one ancient mural on the wall, a man turns a wheel as time passes to his left and right, representing realism and surrealism. The wheel was not a crude one from an oxcart or a wagon, but swift and nimble like my bicycle’s wheels. The wheel was narrow and distinct. Unless it was solid steel, it could not have been able to bear the load. The wheel was not linked to any cart, and was the simple form of a wheel not yet used in real life.

Goguryeo’s wheel appears to have been a powerful and utilitarian object that represents secular prosperity. In the many paintings in the tomb, the wheel is the most realistic and cutting-edge object of civilization.

The movement of the man turning the Goguryeo wheel is lighthearted.

Joseon Dynasty scholar Pak Je-ga (1750-1805) was enthusiastic about wheels. In his book, “Bukhakui,” he described from the first page his admiration for the wheel. He discovered the cultural and economic significance of wheels. He lamented the reality that the use of wheels was limited in the Joseon Dynasty (1392-1910), and claimed that by communication made possible through wheels and linked roads, the world could be changed. His suggestions, however, were ignored. The Goguryeo-era wheels had been abandoned even through Pak’s era.

A wheel is a circle. Linking this to a power supply and rolling over roads, people can go forward endlessly. The road for humankind is far and long. The Goguryeo wheel in the mural is still rolling.