MVP had lady luck on his side

MVP had lady luck on his side 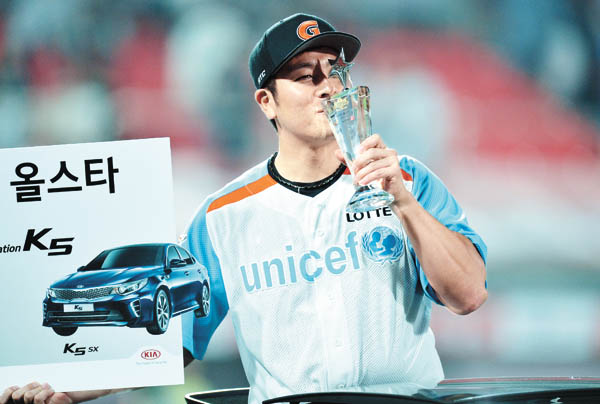 For Lotte Giants catcher Kang Min-ho, the Korea Baseball Organization (KBO) All-Star Game is a familiar event - he hasn’t missed playing in the event since 2007.

But this time, the 29-year-old enjoyed his best showing yet as he became the MVP after the Dream All-Star team’s 6-3 victory against the Nanum All-Star team on Saturday.

With more than 18,000 fans attending the 2015 All-Star Game held at the Suwon KT Wiz Park in Suwon, Gyeonggi, Kang received a total of 26 out of 43 votes from reporters to beat Doosan Bears pitcher Yoo Hee-kwan, who had 11 votes, winning his first ever All-Star MVP trophy. 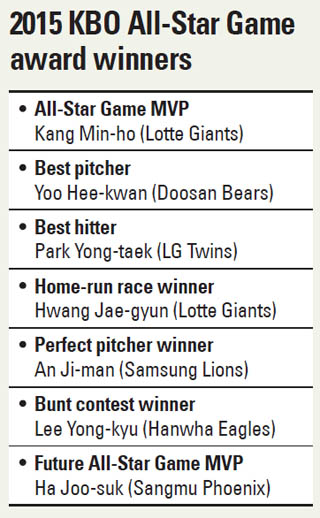 Kang, who was the starting catcher for the Dream All-Star team, was 2-for-3 with 2 RBIs, including a home run.

When the team was leading 1-0 in the second inning, he hit a two-run homer against the NC Dinos’ Eric Hacker before getting a single against Dinos pitcher Son Min-han in the fourth. The four-time KBO Golden Glove winner was later replaced with Bears catcher Yang Eui-ji in the sixth inning.

Kang, who made his KBO debut in 2004, is one of the regular players in the All-Star Game. He has played in every game since 2007. This year, he collected 1.23 million fan votes, taking a top spot in the Dream All-Star team’s catcher position.

Although he is a regular at the All-Star Game, this year was the first time the Jeju native became MVP, as well as hitting a home run.

“Honestly, I was just trying to play the game, but fortunately in my first at bat, I got a home run,” he said to reporters after the game. “Manager Ryu Joong-il then said I should be aiming for MVP, and after I got a single in my second at bat, I was determined I had to go all the way.”

Even in All-Star home run contests, Kang’s best record was just a single home run. When asked about the reason behind his performance in the All-Star Game, he simply cited the power of love.

“Whenever my girlfriend visits the stadium, I get a home run,” he said. “But if I asked her to visit every day, I think lady luck would run away, so she should only come once in a while.”

Not only is Kang a devoted boyfriend, he is also a loving son. With the MVP award, Kang received a K5 midsize sedan from Kia Motors, but he said he will give the vehicle to his mother.

Kang, who won the 2008 Beijing Olympic gold medal, said he was a little strained about his MVP win after teammate Hwang Jae-gyun also shot a two-run homer in the ninth. Hwang went 2-for-5 with 2 RBIs on Saturday.

“I was a little nervous, but I knew Hwang would not get [MVP], because he already had it two years ago,” Kang said with a laugh. “I told Hwang to perform like today when we get back with our team.”

The Giants are currently sitting eighth in the league with 11 games behind the leading Samsung Lions. Kang said that his task is to now help the Busan-based club climb up in the league table while overcoming the knee injury he suffered earlier this month.

“Now I finished my training with the reserve team and there is no pain in my knee,” he said. “Manager Lee Jong-woon said that I should be good by pumping up my game rhythm”

Kang’s MVP win reinforces Giants players as the top performers in the All-Star Game. Among 34 All-Star Games, players from the Giants took the MVP spot 15 times, the most among any club.

Although he came in second in the All-Star MVP vote, the Bears’ Yoo Hee-kwan, who was a starter for the Dream All-Star team, was recognized as the best pitcher after shutting down two innings with only 19 pitches. The LG Twins’ Park Yong-taek, who played for the Nanum All-Star team, was named best hitter after going 2-for-2 with 2 RBIs.

Under the slogan of “Share love and give a dream,” the KBO previously said that it will donate some of the funds raised during the All-Star Game. It said that the Dream All-Star team raised 46.5 million won and the money will be given to Unicef to make playgrounds for children, while the Nanum All-Star team’s 37.6 million won in raised funds will be donated to Habitat for Humanity Korea.