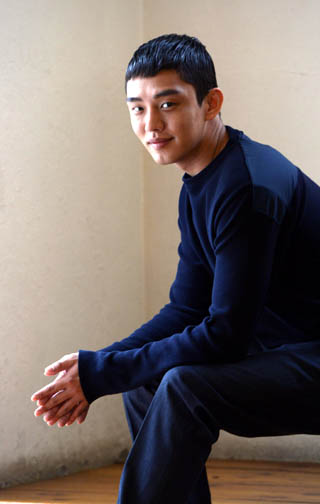 In the film “Veteran,” actor Yoo Ah-in plays Jo Tae-oh, a character born with a silver spoon in his mouth who has spent his entire life believing that there isn’t a thing in the world that he can’t solve with money.

In the action-packed crime drama, Jo always manages to evade the radar of passionate detective Seo Do-cheol (Hwang Jung-min), even telling the seasoned investigator that he won’t be able to handle the “repercussions” if he continues to pursue him.

Sure, Jo is a typical villain, but combine that with Yoo’s iconic childlike image, and you get a more complex character.

The role is quite a deviation from his previous portrayal of Seonjae, a prodigious pianist with a genuine heart who believes in hard work, in the JTBC drama “Secret Love Affair.”

The 120-minute “Veteran,” which opens on Wednesday, is scripted to revolve around the tension between Jo and Seo, which works well thanks to high-quality performances by Yoo and Hwang.

The actor acknowledged that he was at a point “where I needed a film like this.” With the 29-year-old soon to enter his 30s, he added that he is hoping to change his on-screen image.

Q. Jo is a bad guy to the bone. What attracted you to this character?

A. The character was simple and didn’t require a lot of explanation, and I liked that. It isn’t a film about the history of a character, anyway. And it’s not important why he became such a bad person. I just focused on how he’s in charge of this axis of vice within an unfair society.

Your smile has never looked so vicious.

I agree that my face isn’t really the face of a villain. But I thought the common denominator between Jo and me was the innocence. I thought, instead of wearing all frowns and keeping my chin high, wearing a smile and doing bad things would leave a stronger impression.

Did your attitude toward acting also change?

I think so. Before, I wanted to be the icon of the youth. I often took on roles playing rebellious youths. I also tried to play someone that was similar to who I was at the time, so that my filmography would look somewhat like my life at a glance. But for ‘Veteran,’ I let go of me.

You also pulled off dangerous action scenes in the film, including a car chase.

We filmed that scene over a week. It’s such a speedy scene, and I wasn’t feeling my best at the time, so it was hard. But what I remember the most is that I swore at Seo. It was an ad-lib, but I’ve never sworn in a film before. In fact, I smoke in the film, and I’ve never done that either.

Your next film, ‘The Throne,’ a historical period drama, also primarily focuses on the tension between your character, Crown Prince Sado, and actor Song Kang-ho’s character, King Yeongjo.

I took part in ‘Veteran’ and ‘The Throne’ with the mindset of [going into the battlefield.] I thought long and hard about what I should do to survive as an actor, or become a competent actor. Before, I cared too much about actors my own age, I think. But I no longer want to be like that.

Isn’t it difficult to lead in films with such big-name actors like Hwang Jeong-min and Song Kang-ho?

I thought a lot about what I could do to be a proud partner of theirs. I feel that I should continue to face my shortcomings honestly. Otherwise, I can’t learn.