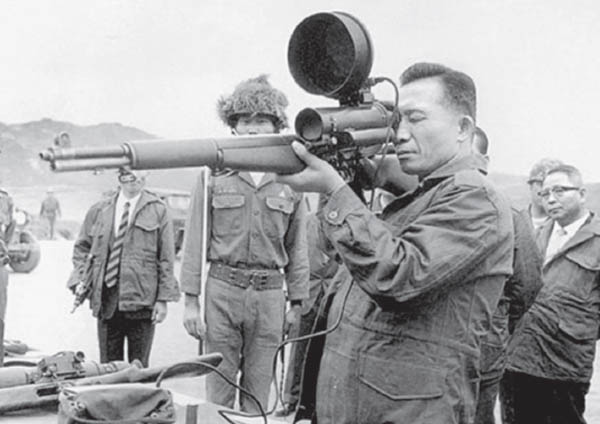 President Park Chung Hee views the North Korean border through the scope of an M-1 rifle on a visit to the Southern Limit Line on May 30, 1968. M-1 rifles were standard rifles for the U.S. forces during the Second World War and used by South Korean forces during the 1950-1953 Korean War. It was 1971 when South Korea first developed some firearms and antitank mines. Provided by Kim Jong-pil

The United States did us a great favor. Not many young people would feel grateful for that, but it is a fact. As the old Korean saying has it, we forget the person who did us a favor but the favor lives on.

But the United States wronged us a little too. They didn’t think carefully of South Korea’s future and didn’t recognize our desperate desire to grow stronger.

It was the United States that broke our will when we tried to develop nuclear weapons. They thought we would use the weapons to invade North Korea. 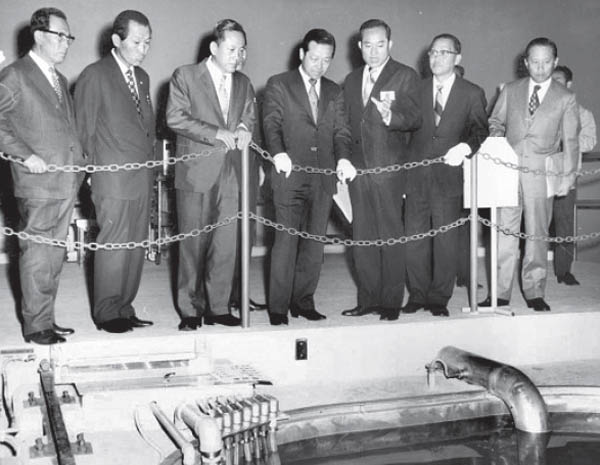 Prime Minister Kim Jong-pil, third from left, takes a look at the experimental reactor TRIGA Mark 3 at the Atomic Energy Research Institute in Gongneung-dong, northeastern Seoul, in May 1972. Provided by Kim Jong-pil

We had to stop developing nuclear weapons in the 1970s, but North Korea eluded restrictions and now has a relatively high level of nuclear weapon technology. The United States didn’t stop the North but did stop us.

Why did they try to stop us? To put it simply, they wanted full control over South Korea. They didn’t want to allow us to get out of their control by developing nuclear weapons. We didn’t have any choice but to follow their advice, but we also resisted.

President Park Chung Hee decided to develop nuclear weapons after the United States announced it would withdraw all of its forces from Korea.

After U.S. President Richard Nixon said in 1970 that one of its two military divisions in Korea would retreat in March 1971 and the rest by 1975, Park told me, “Since we don’t know when the U.S. forces will leave, we need to research atom bombs. If the United States stops us, at least we will have the technology to make nuclear weapons.”

Park was tenacious but also had an acute sense of reality. What he meant was that we may not be able to produce weapons because of U.S. objections, but we still could build the technologies.

It was a particularly practical approach in that we would develop nuclear technology not just for weapons but also to help industry for economic development. It is the same as Pyongyang’s gunpowder factory, which operates commercially during peacetime and produces weapons at times of war.

Development of nuclear technology began in earnest in 1973, when we started focusing on the defense industry and heavy chemicals industry. This was also when the United States had to start a game of hide and seek with South Korea.

In June 1973, I met French President Georges Pompidou and French Finance Minister Valery Giscard d’Estaing, who became president in 1974, in Paris. France had a close relationship with South Korea when it came to developing nuclear weapons and missiles. My job was to support Park’s desire for nuclear weapons.

Every time I met the French, I focused on sales diplomacy for nuclear reprocessing and purchasing missiles or aircraft. Pompidou was suffering from cancer. I got close to Giscard d’Estaing since we met frequently and were around the same age.

Nuclear reprocessing is considered the most difficult technology in nuclear development and one of the most crucial stages.

In May 1972, Park sent Science Minister Choi Hyung-sup to France to secretly get help for South Korea’s atomic energy technology and to introduce nuclear reprocessing facilities.

If we had carried out the contract, we could have made 20 kilograms (44 pounds) of plutonium a year. Given that an atom bomb needs five to 10 kilograms of plutonium, it could have given us two to four nuclear weapons a year.

However, after India conducted a nuclear test in May 1974, the United States searched for countries that were developing nuclear weapons and South Korea soon got caught.

In fact, the U.S. Department of State, Department of Defense and Central Intelligence Agency (CIA) knew well about the secret moves of the South Korean government, not really because their agents in South Korea were competent, but because there were many whistle-blowers. Voluntary spies were everywhere.

Whenever Park brought Korean scientists in foreign countries back to South Korea, the news spread among U.S. agents. We couldn’t do anything secretly. At that time, the president’s Deputy Senior Secretary for Economic Affairs O Won-chol negotiated terms for buying Canada Deuterium Uranium, or Candu, reactors. The United States claimed we were buying them to produce nuclear weapons because it was easier to produce plutonium from heavy-water reactors like Candu reactors.

The Agency for Defense Development (ADD) under the Ministry of National Defense was developing missiles that could reach Pyongyang. The United States insisted it was designed for nuclear weapons and halted its technical support for the missiles’ engine. We had to shorten the range of the missiles to 180 kilometers (111.8 miles).

The United States’ assumption was that we tried to buy reprocessing facilities from France, reactors from Canada and ground-to-ground missiles from the United States for development of nuclear weapons. The U.S. embassy and CIA agents pressured research facilities like the ADD and also government offices like the Blue House, Prime Minister’s Office and Ministry of National Defense to stop development of nuclear weapons.

Park finally gave up on developing nuclear weapons when the contract with France for reprocessing technology was cancelled. The United States also threatened critical sanctions on South Korea if we stubbornly developed those weapons.

However, ceasing development of nuclear weapons did not mean that we lost all the technology. Though we failed to get reprocessing technology, we still bought heavy-water reactors and then used them for Wolseong 1.

We also saw huge progress in missile technology thanks to France, which was defiant of the United States.

I bought a set of Exocet missiles from Giscard d’Estaing for a trial. As soon as we tested the new missiles on a high speed boat, the United States wanted to sell us Harpoons. Harpoons brought peace to the Yellow Sea.

U.S. President Jimmy Carter, who won the 1976 presidential election, again announced that the United States would withdraw from South Korea. While we didn’t have nuclear weapons, that was when the country’s heavy chemical industry was flourishing.

Park said, “If the United States takes all of its forces out of Korea, we will develop nuclear weapons anytime we want.”

The situation was a lot different from the Nixon years because we had much stronger defense and heavy chemical industries.