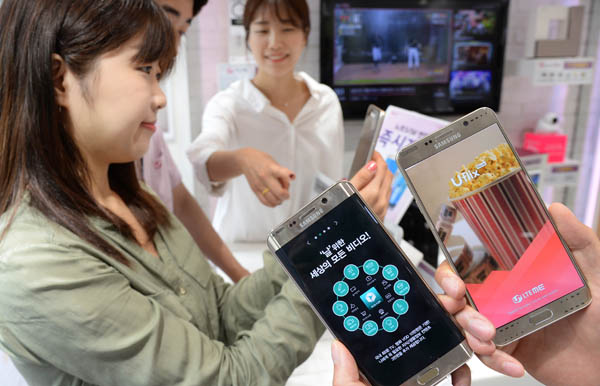 The latest Samsung Galaxy Note 5 and Galaxy S6 Edge Plus being sold to customers at LG U+’s store at City Hall subway station in central Seoul on Thursday. [NEWSIS]

Samsung Electronics launched sales of its latest smartphone models, the Galaxy Note 5 and Galaxy S6 Edge Plus, in Korea on Thursday at prices lower than projected, and mobile carriers also offered hefty subsidies.

The price of Note 5 with 32 gigabyte storage has been set at 899,800 won ($760), to become the first Note series from Samsung to cost less than 900,000 won, as Samsung strives to push its flagship smartphone sales. The Galaxy S6 and S6 Edge models, released in April, haven’t sold as hoped.

Samsung unveiled the two new devices on Aug. 13 in New York. Both smartphones have a 5.7-inch screen with almost-identical hardware.

Multitaskers are being offered the Note 5, with its signature stylus S pen and improved functionality, whereas the S6 Edge Plus, with its curved sides, is designed for the multimedia consumer.

All three Korean mobile service providers - SK Telecom, KT and LG U+ - promised to offer 248,000 won to 285,000 won in subsidies for new subscribers who purchase the phablet, on the condition they’re monthly phone bill is over 100,000 won.

The subsidy range is higher than the amount currently granted to owners of the Galaxy S6, released in April. When the maximum subsidy is taken into account, the Note 5 gets as cheap as 610,000 won.

“Depending on monthly fees, you may purchase a Galaxy Note 5 for less than a four month-old Galaxy S6,” said a spokesman with one of the three carriers.

The two models will be rolled out in the United States today and in Europe and other parts of the world on Aug. 28.

In tandem with the launch of the smartphones, Samsung began offering its mobile payment platform, Samsung Pay, in Korea.

Owners of the new phones as well as their predecessors, S6 and S6 Edge, can, after a software upgrade, swipe up from the bottom of the device’s screen and a payment interface will appear. The user can either choose a credit card and either scan their fingerprint or provide a password to finalize the payment.

Various credit card issuers have come up with promotional events to lure more customers into the new payment system. Samsung Card, affiliated with Samsung Electronics, offers up to 2,000 won per payment, limited to 10 purchases, and Shinhan Card promises 1,000 won in cash in return for payment of 30,000 won or more, limited to three purchases.