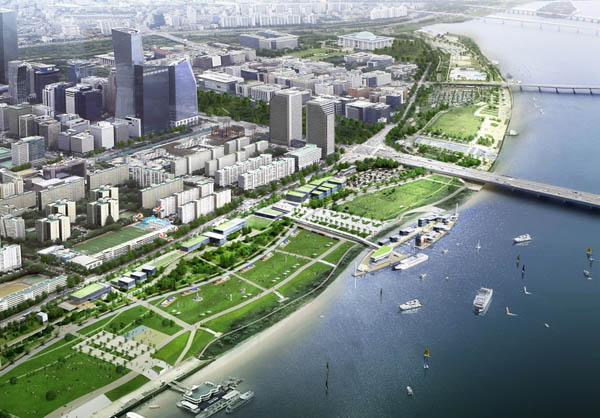 An artist’s rendition of the pier deck, which will be built at the Han River between Mapo Bridge and Wonhyo Bridge. Provided by the city

The central government and local government of Seoul are turning the Han River into a new tourist attraction, just like the Seine in Paris and the Thames in London.

The Seoul Metropolitan Government held a meeting with four different ministries on Monday at the Korea Press Center, central Seoul, and released a general development plan for the Han River to attract tourists and restore the nature along the river.

“The infrastructure along the river had effectively circulated people and goods in the city, but the river has become desolate due to concrete banks and roads,” said Seoul Mayor Park Won-soon. “If the Han River revives and attracts people again, it will become a great tourist attraction, and it will be the second Miracle on the Han River.”

“The Han River, the symbol of Korea’s modern history, has world-class potential in its natural environment,” Choi said.

“With more tourists and residents at the Han River, we will be able to create more jobs in the service industry in various fields such as culture, logistics, sports, leisure and art.”

The river is being divided by the central and city government into seven different sections, and the first section to be revamped will stretch from Yeouido to Ichon-dong.

The city government explained that the section has the most visitors and is home to existing tourist spots like Yeouido Park, Saetgang Tributary and the Bamseom islet.

According to the plan, a riverside cultural complex - temporarily named “Yeouimaru” - will be built on Yeouido. It will house a pier that can moor a 700-ton ferry, which will also feature cafes and restaurants.

The city government also plans to operate amphibious sightseeing busses that will take tourists from Yeouido to the Hongdae area of western Seoul.

Some other parts of the section are being turned into green spaces.

In the Yeouido area, parts of the riverside are being turned back into forest. In the Icheon area, concrete sections are going to be restored into wetlands. Nearby, restaurants and cafes will be built for visitors.

After reviewing the plan later this year, construction on the Yeouido-to-Ichon section will begin in 2017. The construction is expected to be completed in 2019.

The budget for the development of the first section is 398.1 billion won ($330 million), and the central government and Seoul Metropolitan Government will each pay half the cost.