An alternate path for some students

An alternate path for some students 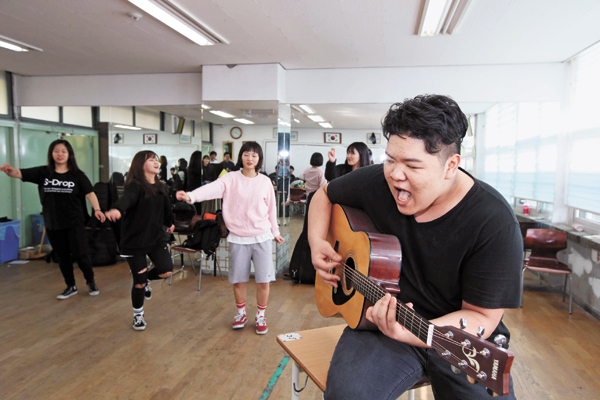 Cho Nam-jun, right, a practical music major, plays the guitar while his friends dance along on Oct. 6, at Ahyeon Polytechnic School in Seoul. [Oh Jong-taek]

Currently there are nine polytechnic schools nationwide - five in Seoul - that offer vocational education and training and only accept the third-year high school students.

Most first and second-year students still have the opportunity to transfer to specialized high schools, with the chances more limited to third years.

The application process for polytechnic schools usually begins in late November, wherein second-year students are eligible to apply. Criteria for selection are based on a student’s attendance, grades and volunteer work.

Students who pass the set standards are announced in December.

Polytechnic schools have been highly useful for many high schoolers like Song Jae-kyung, who attends Seoul Girls’ High School.

Song put a lot of thought into possible career paths, believing it wasn’t right for every student to focus solely on studying in preparation for the college entrance exam. But along with low self-confidence and a lack of guidance, she received poor grades.

With a talent for computer operating skills, she applied to Jongno Polytechnic School and was later accepted. Song is currently majoring in computer security and is content studying a subject in which she is genuinely interested.

“I’m studying what I had wanted to learn, from Linux to application development and programming,” she said.

Ahyeon Polytechnic School is another specialized institution in Seoul, boasting 794 colleges with 17 departments, including practical music, photographic image and baking. There, students choose what they want to learn about.

Cho Nam-jun, who is currently majoring in practical music, had always dreamed of attending an arts school of art due to his love for playing the guitar. But the high tuition prevented him from making that a reality. For him, a polytechnic school was a reasonable option, particularly because the institutions are government-funded.

“After giving up on art school, I looked into polytechnic schools,” Cho said. “I want to study [music] theory and content management.”

He studies music for about 18 hours a day.

“I placed a temporary bed in the practice room, and eat and sleep there. But it’s not tiring at all. I really enjoy coming to school. I get to study with friends who have the same dreams as me.”

In fact, the singer Ailee recently praised his musical abilities on the audition program “Super Star K 7,” saying that she was “completely immersed.”

Ahyeon Polytechnic School has seen numerous musicians pass through its halls - Wheesung and Park Hyo-shin are graduates - and it is proud to call itself a place where students can showcase their abilities to the fullest, according to its principle, Bang Seung-ho, who is also a singer with three released albums.

“The students who were regarded as troublemakers at their high schools suddenly turn into geniuses here,” Bang said. “The number of high schoolers wishing to enter our institution has consistently risen each year.”

A multitude of polytechnic school graduates have gone on to attend their top-choice universities or been offered outstanding career opportunities.

Jung Hae-chan, 18, a Seoul Polytechnic School student majoring in refrigeration and air-conditioning, for example, is highly satisfied with his studies.

“There was nothing that I particularly wanted to do, and I always fell asleep during classes. But things have changed now [since attending Seoul Polytechnic School],” he said.

Kim Young-yeon, 18, who attends Ahyeon Polytechnic School, also feels like she’s closer to achieving her dreams. A broadcasting major, Kim hopes to go on to attend Dong-ah Institute of Media and Arts.

“My mother was initially strongly opposed to [the idea of a polytechnic school] because of the widespread bias that vocational schools are for troubled students,” she said. “But she’s come around since seeing how happy I am.”

The government is currently planning to expand opportunities for students to receive vocational education in line with increasing demand.

“We’re planning to expand vocational education and training for high school students through cooperation with the Ministry of Employment and Labor,” said an official from the Ministry of Education.

The official added that efforts are underway to accommodate every student who wishes to receive specialized education by 2016.