Pressure’s on for newest WKBL star

Pressure’s on for newest WKBL star 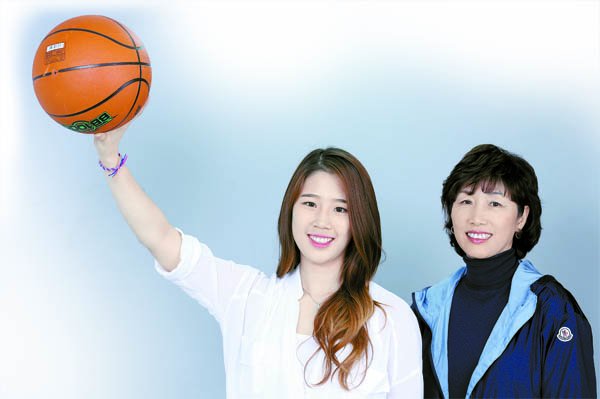 Incheon Shinhan Bank S-Birds guard Shin Jae-young, left, stands with her mother Kim Hwa-soon, who was also a basketball player in 1980s. Shin is the first Korean woman to play in the NCAA Division I in the United States. [YANG GWANG-SAM]

It’s not every day that a Women’s Korea Basketball League (WKBL) player is compared to a K-pop star, but Shin Jae-young is used to being a little different.

Fans have nicknamed her “Basketballer Suzy,” after the actress and member of girl group Miss A. The comparison comes from both her resemblance to the star, as well as response she’s received from local fans before even stepping foot on a Korean court.

The Incheon Shinhan Bank S-Birds guard was the fifth pick in the WKBL rookie in October, and she made finally made her pro debut on Nov. 13 against Woori Bank Hansae with 2 minutes left in the game. Though she didn’t manage to score, she still made headlines the next day.

Shin, 23, was the first Korean women to play in the NCAA Division I in the United States, playing for University of Louisiana-Monroe in 2011. She transferred to Humboldt State University in California in her junior year and later won the California Collegiate Athletic Association (CCAA) championship.

Shin’s basketball skills can be traced to her mother, Kim Hwa-soon.

Kim was a forward for the Korean national basketball team in the 1984 Summer Games in Los Angeles, where Korea won the silver medal. Kim, now an assistant coach at Dongju High School, was the top scorer during those Olympics, averaging 16.8 points per game.

Kim said she noticed Shin’s talent for sport from an early age, and recommended she try playing basketball. In the fourth grade, Shin transferred to Sunil Elementary School to play for their basketball team.

“I knew how much it takes to play sports, so I didn’t ask Shin’s older sister [Shin Jae-eun] to play basketball,” Kim said. “But when I looked at Shin, I just had this feeling that she should play basketball, and she enjoyed it.”

Shin did so well that her mother wanted to move her onto a bigger stage. As soon as Shin entered Sunil Girls’ Middle School in Seoul, her mother moved with both her daughters to Seattle, hoping for a better education and more competitive basketball. Shin’s father, Shin Yong-hoon, stayed in Korea to support the family.

At first, Shin didn’t like idea of moving to America because she her teammates here had also become her friends.

“It’s was my parents’ decision to go the United States,” Shin said. “I wanted to stay in Korea and play with my friends, but I had no choice.”

Her mother planned to keep them in Seattle for just a year, but that changed when Shin became fascinated by American basketball.

“I was amazed by my American friends’ dribbling skills,” Shin said. “After experiencing basketball at that high level, I thought one year would be too short. That’s why I told my parents that I want to live here longer.”

But living in a different culture wasn’t always easy, and her teammates weren’t friendly at first.

“Maybe they laughed because an Asian girl who couldn’t speak English was trying to play basketball,” she said. “But when they saw my game, they saw me through different eyes because I’m quicker and more skillful than they thought.”

Despite her skills on the court, Shin remembers racism during games.

“One day, I tried to make free throws, but I heard a song from the Disney film Mulan,” she said. “I know it was only intended to interrupt my concentration, but I think it was also kind of racist. I also heard that some people saying things like, ‘That Chinese girl can really play.’ Hearing that kind of stuff made me really sad.”

But basketball was still her passion. The difficulties made her stronger, Shin said, and she never lost the willingness to put in hard work that she attributed to her Korean identity. After he team training finished at 9 p.m., Shin would practice shooting late into the night.

“In the U.S., players don’t train a lot like in Korea, but that doesn’t mean I got to sit and rest,” said Shin. “I know American players have better physiques than me, so in order to beat them, I had to maximize my skills.”

Her mom also helped her adjust to the new environment, and kept her coaches in check after they learned she was an Olympic medalist in basketball.

“When my mom was sitting behind the bench, our coach couldn’t order us around like they would normally,” Shin said. “During training, even my teammates would watch my mom, and when she smiled, they would look relived (laughs).”

But Kim was also a typical Korean parent who had high standards for her daughter in both sport and academics. After all, Shin is a two-time recipient of All-Academic award from the California Collegiate Athletic Association.

“The core of my life is basketball, but through studying, I have broadened my thoughts on life,” Shin said.

Shin said she wasn’t given much playing time at the University of Louisiana-Monroe, so she moved to Humboldt State University (HSU), even though the school was in the lower NCAA Division II.

In her senior year, Shin played 29 games for the university and averaged 11.8 points, sinking 44.4 percent of her 3-pointers. She was also the captain of HSU’s 2014/15 CCAA Championship team.

Shin graduated in May with a degree in marketing and returned to Korea.

“The reason why I went to the United States 10 years ago was to develop my skills further and become good player in Korea,” she said. “I have big expectations, but at the same time, I’m also nervous about my professional career. What’s important is that I should get along with my teammates and adjust to my life here.”

Off the court, Shin is just like any other twenty-something who likes to watch movies. She says her ideal man is either actor Lee Sang-yoon or chef Sam Kim, and that she wants a boyfriend - if her mom would let her.

“Wherever I go, my mom asks me questions like, ‘Where are you’ or, ‘Who are you meeting with,” Shin said. “But I can tell you that I have met boys secretly (laughs).”

But since becoming a pro, Shin has vowed to focus solely on basketball, a decision her mother wholeheartedly approves.

Shin says he feels it’s time to repay her mother for the support she’s given and the sacrifices she’s made, and that can only come from good performances on the court. If she retires from basketball, Shin says she would want to work as a sports administrator, but until then, she just wants to make her mom proud.

“My mom supported me for 10 years in the U.S. to play basketball and I have a responsibility to return that sacrifice,” Shin said.

“I want to play for the national team one day. I won’t dent my mom’s reputation.”

Does she think she can live up to her nickname, acquiring a legion of adoring fans?

“That nickname creates so much pressure for me,” she said. “It’s alright that people say I’m pretty, but I want to be recognized for my basketball skills.”