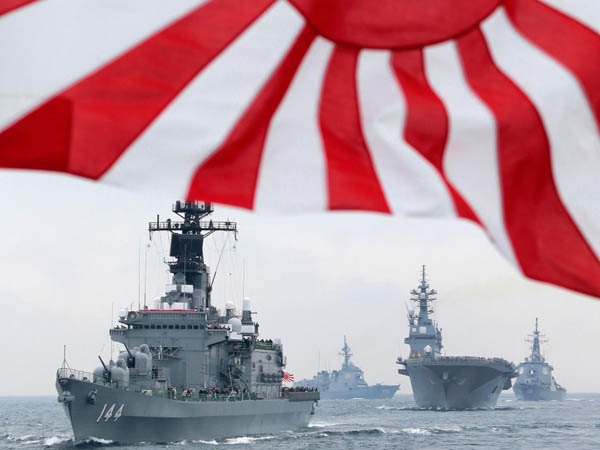 Japan ranked as the largest arms importer worldwide, having a significant military expenditure, as shown by a U.S. government report that illustrated the Pacific nation’s steady military rise over the past few years.

The U.S. Department of State on Dec. 31 released the World Military Expenditures and Arms Transfers (WMEAT) report for 2015, which showed that Japan has continuously been bolstering its capabilities since 2000.

The findings put Japan at No. 1 on the list of arms importers among the 170 countries surveyed by the U.S. government. From 2002 to 2012, Japan spent an annual average of $15.1 billion to purchase arms. No data starting in 2013 was included in the report. 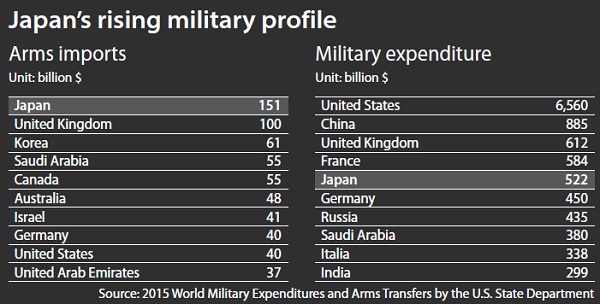 According to the numbers, Japan’s spending on arms imports over the past 11 years nearly amounted to the sum spent by the British and Korean governments.

Korea ranked 51st on the list, with a military consisting of 679,000 people; its annual average spending per soldier stood at $37,700.

The latest report only surveyed data up to 2012; but because Japan’s accelerated attempts to bolster its military might since the re-election of Prime Minister Shinzo Abe were not taken into account, it is likely that the country’s military expansion is more inflated than that the numbers show in the report.

Because of the peculiar nature of its geography as an island nation, Japan has invested largely in boosting its missile defense systems, while preparing to deploy troops outside the country in time of a contingency - presumably to the Korean Peninsula and the areas surrounding the East and South China Seas.

All are purchases from the United States and military observers say they are intended to strengthen the surveillance capabilities of Japan’s Self-Defense Forces toward the Korean Peninsula and in the region, allowing the rapid deployment of Japanese troops overseas.

The United States supports Japan’s military expansion as a way to keep the quickly rising China in check. Not only was Japan allowed to purchase advanced arms from American defense contractors, but Japan and the United States are also jointly developing a missile program.

Last year, the two countries successfully conducted a test on a jointly developed ballistic missile interceptor; the next-generation Standard Missile-3 Block IIA was developed by Raytheon of the United States and Mitsubishi Heavy Industries of Japan.