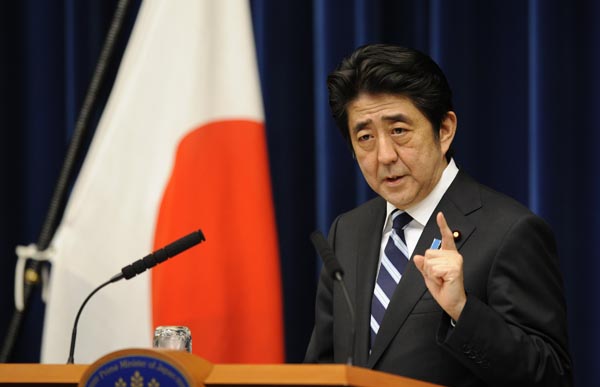 The Korean Ministry of Foreign Affairs Tuesday warned that such remarks could hinder a “faithful implementation” of the agreement between Korea and Japan sealed at the end of December to resolve the issue of Japan’s coercion of girls and young women to serve in its military’s brothels during World War II.

Speaking in front of a budget meeting of the Diet’s upper house in Tokyo on Monday, Abe restated his long-held position that the Japanese government has not found any evidence of “forced mobilization” of the women by the military in documents, as stated in a Cabinet meeting in 2007, reported Japanese media Monday.

“There has been no change to this position,” he continued.

He also said the Japanese government “has not acknowledged that the comfort women issue is a war crime” through the recent deal.

The prime minister responded to a lawmaker’s question on whether the Japanese government’s position on the comfort women has changed.

Abe has a track record of historical revisionism and has repeatedly made remarks that there is “no evidence” of the coercion of the women, even during his first stint as prime minister in 2007. Such denials by Japanese leaders of responsibility for the comfort women have been met with consternation internationally, including by the United Nations.

The prime minister repeated the Japanese government position that all legal issues stemming from the comfort women issue were resolved in a 1965 treaty to normalize bilateral relations.

Japanese Foreign Minister Fumio Kishida told the Diet Monday that the women forced to work in Japan’s military brothels should not be called “sex slaves,” saying the term “doesn’t match the facts.”

On Dec. 28, Korean Foreign Minister Yun Byung-se and Kishida struck a breakthrough deal to resolve the comfort women issue, which includes an apology from the Japanese prime minister and a plan to establish a fund for the victims using 1 billion yen ($8.3 million) of Japan’s state budget.

The two sides also agreed that the settlement is “final and irreversible” as long as Japan faithfully follows through with it.

“The forcing of the women into sexual slavery is a historical fact and truth that cannot be denied under any circumstances,” said Ministry of Foreign Affairs spokesman Cho June-hyuck in a briefing Tuesday in response to Abe’s remarks. This is a fact accepted internationally, he said.

He added that the “forced mobilization of the women against their wills by the Japanese military” is backed by the comfort women victims’ own testimonies, official documents, records from the International Military Tribunal for the Far East and the Batavia Temporary Court Martial in relation to the “comfort station” in Semarang, Indonesia, the report on the Dutch government’s investigation into the issue and various other documentations.

The Japanese government however appears to be backing away from an acknowledgement of its military’s forced mobilization of women into sexual slavery, an issue considered internationally as a human rights crime. This comes as Japan will undergo another textbook review in March, which has often brought concern in Seoul because of increasing right-wing revisionism in education materials for students.