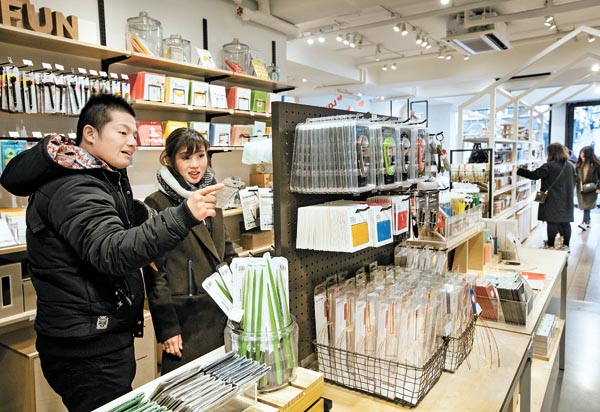 Customers shop at JAJU, a retail brand by Shinsegae International, in Sinsa-dong, southern Seoul, on Tuesday. BY PARK SANG-MOON

The flagship store of JAJU, a retail brand by Shinsegae International, is all clean lines, muted colors and minimalist goods.

Everything from notepads and diffusers to kitchen products, body cushions and clothes are on display for prices that make even the thriftiest shopper comfortable.

JAJU is the first Korean lifestyle brand by a major conglomerate to offer a huge array of goods including housewares and daily supplies, a segment pioneered by brands like Japan’s Muji.

Shinsegae International has never explicitly said it hopes to emulate the success of Muji, but the core brand concept - no-frills products at cheap prices - speaks for itself. 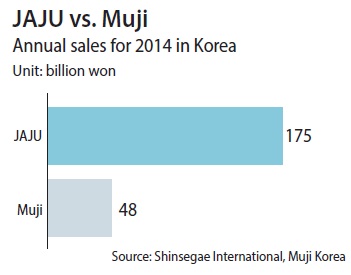 The combination of simplicity, affordability and decent quality has boosted JAJU’s appeal among local consumers who appreciate a deal, but the similarities with Muji might hinder its expansion into the global market, which is Shinsegae’s ultimate goal.

The five-story flagship store in the posh Garosu-gil area of Gangnam District, southern Seoul, symbolizes Shinsegae’s ambitions for the brand.

In terms of sales, JAJU outperforms Muji in Korea thanks to its presence in stores like E-Mart, Shinsegae’s discount supermarket chain, and other shopping outlets.

But the sales gap isn’t a big consolation for the local brand, since it operates a drastically larger number of stores.

Muji has only 14 stores in the country whereas JAJU has 148.

The brand maintained a humble presence only a few years ago, located solely inside of E-Marts.

Until 2010, the brand name was Jayeonjui (which translates to “naturalism” in Korean) and was managed entirely by E-Mart.

But since Shinsegae International, the fashion-oriented affiliate of Shinsegae Group, acquired the brand and changed its name to JAJU, the category of products has expanded.

The company is also focused on diversifying the location of its stores beyond E-Mart to stave off the perception that JAJU is merely an in-house label.

Along with the flagship store that opened in 2014, JAJU added an additional branch in the COEX Mall in Samseong-dong, southern Seoul.

The colors, patterns and materials of JAJU products are understated. But the plainness helps keep manufacturing costs low, resulting in lower prices.

The prices of most goods at JAJU are low even compared to Muji, a major selling point of the brand.

Shinsegae said that the standard design and simple packaging pushes the prices lower, even though 90 percent of the products are made in Korea.

And the plain-looking goods appear to be appealing to customers’ tastes.

“When I place plain white dishes and cups together, it gives off a modern and pleasant vibe,” said Choi Hee-young, a 33-year-old woman who was perusing kitchenware at the JAJU flagship store.

“Because they can form some kind of uniformity, they are easy to match together compared to fancy, carefully designed items with colors.”

As part of its efforts to enhance design, Shinsegae tapped well-known designer Oh Joon-sik as the creative director for JAJU last year.

JAJU is trying to carve out a niche for itself by making its products more explicitly “Korean.”

“Based on the understanding of the Korean lifestyle, JAJU tries to offer quality goods at affordable prices,” said Kim Woong-yeol, head of the sales division at JAJU.

For example, the brand sells small onggi, or crock pots, designed to better keep traditional dishes such as kimchi and soybean paste. The pots typically come only in big sizes because they are placed outside in bulk.

“This type of onggi is designed to keep temperatures so that the food inside is better preserved,” said Han, the head of the flagship store.

“But now the size of households is becoming smaller, and we learned that there is a demand for smaller pots,” she said.

JAJU stores gained insight into its consumers’ tastes by inviting stay-at-home moms to offer their opinions in the development stage.

Their thoughts are particularly reflected in kitchenware and kids’ products.

“Cooking spoons made by overseas manufactures are rather big, which is inappropriate for Korean users,” Han said, “So we surveyed the ideal size of cooking spoon for consumers and adjusted the size.”

When the retailer revamped its brand in 2010, JAJU added a line of designer furniture, as well as items for kids and travel.

To boost its furniture collection, JAJU teamed up with global furniture company Fritz Hansen and Sigga Heimis, a former designer for Ikea.

Of its existing categories, JAJU has boosted aromatherapy, home decor and body care products in response to the growing demand.

“With the rise of single-person households, we found that products used to decorate houses or as a little treat are really doing well,” Han said.

“They are not essentials, but the items can cause a little joy or make for a more pleasant atmosphere.”

Shinsegae International said in 2014 that it will develop JAJU into a global brand with annual sales of 500 billion won by 2020.

The retail unit, headed by Chung Yoo-kyung, a daughter of Shinsegae’s founding family, has yet to elaborate on its global expansion plan.

Some analysts predict JAJU will focus on local markets for the next year or two because the brand’s revenue drives sales growth for Shinsegae International.

“JAJU plans to open 10 more stores by the end of this year,” said Yoo Jeong-hyun, an analyst at Daishin Securities.

“Revenue that comes from each JAJU store is very high, and the combined sales account for 20 percent of Shinsegae International’s sales.”

But industry insiders say JAJU needs a more distinctive identity and brand strategy to distinguish itself from the better-known Muji.

The product categories overlap with those of Muji, and some products offer similar functionalities.

“The key to success in the global market depends on how JAJU can create its own brand concept distinct from Muji,” said a retail analyst who requested anonymity.

“But right now, the distinction is not enough to pull off the same success as Muji.”