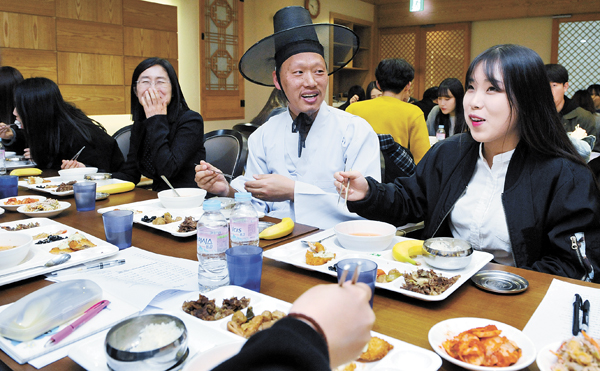 In Konyang University’s VIP restaurant on Monday afternoon, guests learn etiquette while dining with Headmaster Yu Jeong-in, center, from Yanji Seodang. The class, established in 2013 by the university to cultivate students’ behavior, has become quite popular. [KIM SEONG-TAE]

Dressed in the elegant flowing robes and horsehair hat of a Joseon Dynasty seonbi, or Confucian scholar, a man steps into Konyang University’s restaurant for esteemed guests, located in Nonsan, South Chungcheong, and hands out copies of a classic philosophical text to students. He encourages them to repeat after him as he reads aloud from it.

Such a scene is rarely witnessed in Korean university classrooms today, where students are usually taught with modern textbooks and LCD projectors.

But this lecture is part of the curriculum of a liberal arts course at Konyang University, designed to cultivate well-mannered students through careful dining instruction, whereby students learn how to greet guests, engage in conversation and show respect to elders.

Their seonbi instructor, a 45-year-old man named Yu Jeong-in, is the seodang headmaster in Nonsan, a seodang being a traditional Korean private school that mostly teaches ethics and manners based on Confucian texts.

After reciting from the text, which was originally written for children by the Song Dynasty Confucian scholar Liu Zicheng, Yu outlines four of the five main Confucian virtues, known in Korean as in-ui-ye-ji: the good feeling one experiences after being altruistic; a sense of justice; knowing and practicing the rules of decorum; and knowledge (the fifth virtue is integrity).

After about 50 minutes of recital, the students and Yu sit down at a table to dine together. Yu’s teaching, however, doesn’t end when the meal begins.

“Thanks to the farmers and workers who made this meal possible,” says Yu. Then he adds, “Even as we eat, we must be considerate toward those around us and mind not to spill or splatter our food.”

“University students these days are only interested in accumulating more knowledge, and are indifferent toward learning basic manners and improving their personalities,” said Kim Hi-soo, 89, president of Konyang University.

“I was inspired by Korea’s traditional culture, in which people learn basic manners while eating together with their parents.”

The class first started during the university’s fall semester in 2014 and is incredibly popular among students. In fact, during the online course registration period, the class usually reaches its maximum enrollment capacity in a matter of minutes.

The two-hour class is divided into two parts. One half is conducted by instructors who dine together with students, while the other half is devoted to lectures and debates. The instructors of the class change every week and always come from outside the university.

On March 14, poet Na Tae-joo, 71, came to teach the class about the proper use of language. He recited his poem “Wild Flower” and taught students that only when they learn to properly use language will they then be able to behave appropriately.

Other instructors who plan to provide lectures include a police officer, the head of a theater group and a person with limited sight.

In May, Oyuntulkhuur Batsuuri, a female Mongolian and naturalized Korean citizen by marriage, will conduct a lecture.

“I’ll explain to the students different scenarios that could hurt foreigners living in Korea and encourage them to try harder to live in harmony with people from other countries,” she said.

“After taking the course, I started to think more about others and less about myself,” said Kim Dong-hee, 21, a sophomore at Konyang University. “Headmaster Yu’s speech about how one should think twice before saying something out loud was especially memorable.”

Another unique aspect of the course are some of the class assignments given to students.

In one case, students had to go grocery shopping, prepare meals for their parents and converse with them for the evening.

For the upcoming Parents’ Day on May 8, students will be asked to cook a meal for their parents.

“I told students about the assignment early in the semester so they could save enough money to prepare the meal,” said Lee Byeong-im, 50, a professor of counseling psychology who is currently in charge of the class.

The students have to record themselves cooking the meal and submit a written document detailing what they discussed with their parents while eating together.

“I cooked for my parents for the first time in my life,” said Kim Jae-hyuk, a sophomore studying finance at the university. “While I was cooking, I thought how difficult it must have been for my mother.”

“The students enjoy the class, as they can meet and experience instructors with a wide range of occupations, including visually impaired people and North Korean defectors,” Lee said. “The school is planning to further promote the course by inviting even more diverse instructors in the future.”