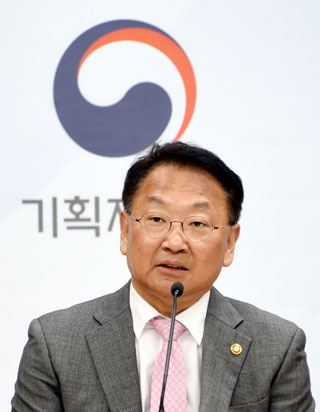 Finance Minister Yoo Il-ho announces specific plans to revitalize the local economy at a briefing held at the Sejong Government Complex on Tuesday. [MINISTRY OF STRATEGY AND DEFENSE]

In a desperate attempt to get the economy up to 3 percent annual growth, the government has decided to shift focus, from stimulating consumer spending and reviving the real estate market, to major industrial restructuring to generate jobs.

“On top of the previous four major restructuring reforms - of labor, the public sector, finance and education - we will push ahead with industrial reform, and in order to do so, we will speed up corporate restructuring while enhancing our policy supports for new industries,” said Yoo Il-ho, finance minister and deputy prime minster for the economy, on Tuesday at a press briefing at the Sejong Government Complex.

On Wednesday, Yoo celebrated his 100th day in office.

“The government departments related to industries, which have a huge influence on the public, will go through a comprehensive evaluation, and companies that are found insolvent will undergo restructuring while normal companies will be encouraged to voluntarily reform [to increase their competitiveness] through eased government regulations,” Yoo said.

While Yoo stressed the urgency of restructuring in industries that have lost competitiveness, he said the government will come up with measures to make the restructuring less painful.

There is rising awareness that the Korean economy will fail to reach the 3 percent growth target that the government set for this year due to unfavorable global economic conditions, including slowing growth in China.

Numerous institutions in Korea and abroad have lowered their growth outlooks for the year to below 3 percent. On Tuesday, the Bank of Korea cut its projection from 3 percent to 2.8 percent, while other institutions have slashed forecasts to as low as 2.4 percent.

Some analysts have argued that the strategy employed by Yoo’s predecessor, Choi Kyung-hwan, to boost the economy by stimulating domestic demand and revitalizing the real estate market wasn’t enough.

The finance minister has maintained his previous argument that 3 percent growth is doable.

In fact, he said the recent outlook by the International Monetary Fund, which cut its forecast from 3.2 percent to 2.7 percent, was not a problem that Korea faces alone.

“The International Monetary Fund lowered the rate mainly due to declines in facility investments and exports in the fourth quarter of last year,” Yoo said. “However, I do not see that as significant, since the overall global economy is also slowing down.”

However, he did admit that struggling exports and shrinking investment are factors holding back the economy.

In hopes of turning the tide, he said the government will step up policies to encourage investment in growing industries such as the Internet of Things, as well as creating jobs.

“The risk in new industries is very high, but the returns are high, too, and the government will try to help companies through various ways, such as giving tax deductions,” Yoo said.

The finance minister said he will try to push as many bills as he can related to reforms, including restructuring the labor market and lifting regulations, before the new National Assembly convenes, during which liberal parties will have a majority.

“As of now, I do not see any point in making changes to bills just to make them meet liberal parties’ tastes,” Yoo said. “I will try to have the current National Assembly members pass a vast majority of the bills, and will explain the necessity and importance of these bills to new members.”