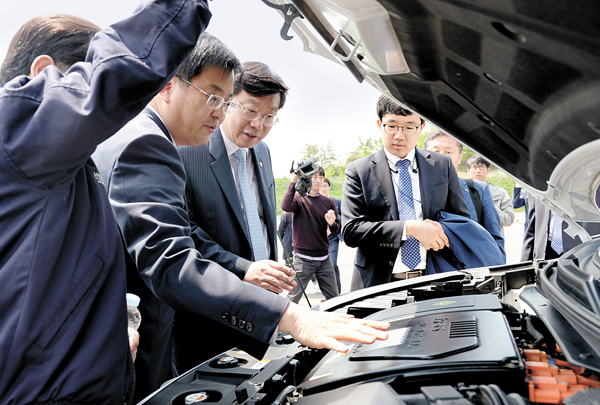 Minister of Trade, Industry and Energy Joo Hyung-hwan, third from left, examines the engine of a hydrogen-fueled vehicle in Daegu on Friday. [MINISTRY OF TRADE, INDUSTRY AND ENERGY]

The government will spend 145.5 billion won ($127.7 million) over five years to develop key technologies for self-driving cars in hopes of beating out global competitors, including leading IT companies, beginning in 2017.

“Tesla, Google and Apple are changing the paradigm of the automobile industry, and Korean companies are working hard to follow the new trend,” Minister of Trade, Industry and Energy Joo Hyung-hwan said on Friday at a meeting held at the Korea Intelligent Automotive Parts Promotion Institute in Daegu. “Vehicles were thought to be just means of transportation, but they are now transforming into smart machines that provide both safety and convenience.”

Joo visited the institute on Friday and met with a number of industry insiders from IT companies like Naver and conglomerates like Samsung Electronics, Hyundai Motor and LG Electronics to discuss issues surrounding self-driving cars.

The eight key areas that will be receiving government funding include camera modules, radar modules and digital maps.

Joo also said he would hold discussions with other government branches about reducing the regulations that companies say are holding them back from developing new technologies.

He added that the Trade Ministry will also promote providing various benefits, including discounts on insurance premiums for owners of autonomous vehicles that install safety devices made with Korean technology.

The government will also create a 7 billion won fund to invest in the so-called automotive convergence alliance, which was established in December to facilitate the sharing of technology and creation of joint research projects in the automobile sector.

The alliance counts some 90 companies in the automobile, IT, software, communications and materials industries as members.

The trade minister also test-drove a hydrogen fuel-cell vehicle planned to be used in the 2018 PyeongChang Winter Olympics at the institute before the meeting to check on the status of the technology.

Fourteen cities and provinces around the nation have each selected two industries or business sectors they believe are essential for their economies to grow, and the government plans to exempt them from following specific regulations pertaining to these areas.

Daegu, where Joo’s meeting was held Friday, was designated in December as a special zone for autonomous vehicles. Vehicles can now be tested in the region without having to undergo a lengthy review process by the central government.

Joo attended another meeting hosted by Daegu Metropolitan City later on Friday and emphasized the importance of local governments and companies operating in the region to step up, and develop and find new markets in order to boost the domestic economy, according to the ministry.