Actors in the upcoming Park Chan-wook movie “The Handmaiden,” from left, Cho Jin-woong, Kim Min-hee, Kim Tae-ri and Ha Jung-woo, pose for a photo at a press conference on Monday at the Westin Chosun Hotel in central Seoul. [NEWSIS]

Acclaimed director Park Chan-wook said he didn’t expect his latest project, “The Handmaiden,” to be put into competition at the upcoming Cannes Film Festival because of its generous complement of commercial elements. Cannes is far more partial to art-house productions.
“To be frank, I didn’t think it would make it to the competition,” Park said at an unprecedentedly large press conference held Monday in Seoul.

“I thought it would suit the Midnight Screening section because it is a charming, happy-ending story without any ambiguous elements, which are often found in art-house movies.”

Park’s soon-to-be-released lesbian thriller, inspired by Sarah Waters’ “Fingersmith,” was recently announced as one of the 21 films competing for the Palme d’Or at the 69th edition of the prestigious film event taking place at the end of this month. Much of the plot line remains veiled, and the cast attending the press event were extremely cautious when talking about the film’s story. Park emphasized that the film’s style will diverge greatly from his previous work.

“This film is the most talky film of all my works, which contributed to extending the running time as well. It contains some delicate humor and trivial episodes,” he said. “I consider this film to be the most unconventional in my filmography.” 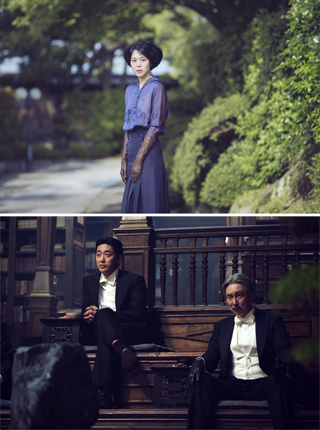 The award-winning filmmaker has directed some 12 movies and participated in even more projects producing and writing.But oddly, Park, who is known for crafting striking mise-en-scene, has never attempted a costume drama before.

“The original novel was set in the Victorian era,” Park said. “When I thought about adapting it to the Korean Peninsula, I had no choice but to pick the Japanese colonial era.

“It was the only period that encompassed a feudal order and strict class system,” he added. “I needed a social hierarchy that allowed the existence of an heiress and handmaiden, but at the same time, the period had to be modern enough to have a mental clinic, which appears as a vital institution in the film.”

For a visual filmmaker like Park, making a talkative film was a challenge in itself.

“I was used to making films that were propelled through gestures and mise-en-scene,” he said. “I didn’t know how the audience would react, but putting in a large amount of lines was a big change for me. I have always thought about making films that are clever and witty through their lines, such as talking with puns. This film was the perfect chance to do that because we don’t have to talk in ordinary language because of its time period.”

Although Park made sure “The Handmaiden” would deviate from his normal style, there are factors that link his new project with his past work.

In addition to that, the production team of “Old Boy” joined forces yet again, including the cinematographer, art, costume and music directors.

“It was a reunion with Lim for the first time in 13 years after ‘Old Boy,’” Park said. “Working with longtime collaborators may sound comfortable, but it has the danger of being lethargic, which is the biggest threat to people who do art.
“I tried very hard to keep everyone tense and motivated.”

It also seems that Park’s signature visual aesthetics and camerawork will not be compromised just because of an easy-to-follow plot line.

“I tried to visually accentuate at times harmonious and awkward conflicts of the colonial era,” he said. Prior to the announcement of “The Handmaiden” going to Cannes, the film had already made headlines for its unprecedented combination of actors.

Kim Min-hee, who Park called the most coveted actress in the film district of Chungmuro at the moment, joined the project as a mysterious and fragile heiress who gets involved in a romantic relationship with her handmaiden, played by newbie actress Kim Tae-ri.

Km Tae-ri landed her role through an audition with 1,500 competitors.

Ha Jung-woo plays a conniving count who vies for the heiress’ wealth, while Cho Jin-woong plays the heiress’ guardian, who has his own intentions.

“It was my first time starring in a costume drama,” Kim Min-hee said. “The wardrobe aspects were very interesting. I think [the period] gives the film some of its visual joy.”

Kim Tae-ri, who has never featured in any entertainment production before, said that every time she was worried on set, she simply relied on Park’s words.

“I asked a lot of questions because I was completely new on the set,” the 26-year-old actress said. “I think Park enjoyed me asking questions and brainstorming together to come up with new ideas.”

After its world premiere at the Cannes festival, which takes place from May 11 to 22, “The Handmaiden” will have its nationwide release in June.