SolBridge argues for a better education

SolBridge argues for a better education 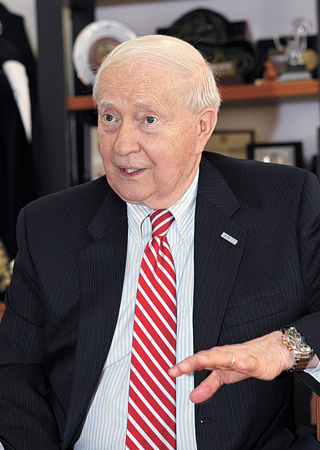 John Endicott, 80, the president of Woosong University, during a recent interview with the JoongAng Ilbo. [KIM BANG-HYUN]

A business school in Daejeon, far from the educational hub of Seoul where most of Korea’s prominent universities are located, not only boasts one of the nation’s most international curricula, faculty and student bodies, but it is also the country’s best place for studying the art of debate.

At SolBridge International School of Business, over 60 percent of the students come from 30 countries, including the United States, Japan, China and Canada, and 80 percent of the faculty members are foreign professors who graduated from prestigious universities such as Harvard.

The architect behind the school’s international composition is John Endicott, 80, the president of Woosong University, where SolBridge was established in 2007. Endicott has been there since 2009 and is the only foreign president of a Korean university.

East Asia has been Endicott’s second home, where he studied the dynamics of the region while working as a professor of international affairs at the Georgia Institute of Technology, a position he took after serving 31 years in the military, mostly in the U.S. Air Force. He also lived for a time in Japan and even married a Japanese woman.

“While I worked as an officer in the American Air Force in 1959, I went to Osan and Gunsan often,” Endicott said. “I’m familiar with Asia since my wife’s Japanese.”

In 2007, Endicott transferred from the Georgia Institute of Technology to SolBridge while it was still in the middle of its construction. In 2008, the construction of the school was completed, and Endicott became the first dean of the school.

The first syllable of the school’s name, Sol, stands for Woosong University’s symbol, the pine tree, called sol in Korean, and for “soul,” while the second part, Bridge, symbolizes the connection between Asia and the West.

To enhance the school’s educational competitiveness, Endicott travels about 10 times a year to foreign universities to adopt aspects of their educational systems and organize student exchange programs with various countries and universities. The president, however, above anything else, has put substantial effort into developing debate programs at the school.

“Debate is the best method to learn how to organize information as well as develop critical thinking skills,” Endicott said. “I require the students to learn not only how to push their arguments forward but also how to control oneself and tolerate other’s opinions throughout a debate.”

In order to develop the school’s debate program, the president scouted Joshua Park, 38, a Harvard Law School graduate who used to teach a select group of Korean high school students how to conduct debates in English. After being introduced to Park by one of the school’s students, who had participated in the World School Debating Championship in 2007, Endicott personally contacted Park and arranged his place at the school.

“The debate club has practice sessions three times every week,” Professor Park said, “and I lecture about once a week or make motions to be debated when tournaments are coming up. I developed a system where I let students debate on a topic first before giving a lecture on it. Such a system allows the students to have a better understanding of the issue beforehand.”

The school’s English debate club has been granted about 30 million won ($26,000) to 35 million won per year. The subsidy includes airfare and tournament registration fees. Park also designed the curriculum for a debate class at the school called Critical Thinking and made it a mandatory course.

As a result of such support, the SolBridge Debate Society has been outcompeting not only in Korean debate circuits but also in the Asian debate community as well.

At the 2015 United Asian Debate Championship, the biggest parliamentary debate championship in Asia, the SolBridge team proceeded until the octofinals (the last 16 competitors), and at the 2015 North East Asian Open, the most prominent English debate tournament in Northeast Asia, the team won the entire tournament, with one of the debaters even winning the best speaker award.

“President Endicott’s support is a great help,” said Donald Felbaum, 21, the president of the SolBridge Debate Society. “He calls the debate team the football team of our school.”

“Through debate, the students can learn how to do interactive reading, in which the students become more attentive to the materials and try to take note of facts they find interesting. The students, while reading various materials to prepare for debate tournaments, can collect valuable information from credible sources that can help them in their daily lives.”

In March 2016, the Association to Advance Collegiate Schools of Business granted the SolBridge International Business School an accreditation in recognition of its debate programs. The accreditation includes a strict and thorough external review of the school’s curricula, faculty qualifications and facilities. Among the 300 applicants, only 30 schools received it.

“Korean elementary and middle school textbooks are starting to include debating as well,” Professor Park said. “I believe debate has become more than an educational trend or fad in Korea. I also hope that other Korean universities will start actively supporting debates.”

Yi Ju-seung, 28, the founder of the SolBridge Debate Society, as well as a benefactor of the university’s active debate program, along with another debater from Korea University, Rho Hye-won, 27, co-founded Debate for All in 2012, a social business to introduce debate to students from rural areas and low-income families.

“We decided to start DFA [Debate for All] because we felt debate needed to be properly introduced to the Korean education scene,” Rho said. “East Asian classrooms still employ a rigid, one-way instruction method in educating its students. Hence, students are not able to develop critical 21st-century skills, critical thinking communication, collaboration and creativity.

Furthermore, we also noticed how debate was a limited resource with severe restrictions in accessibility, as only students from Seoul or affluent backgrounds were involved in the sport.”

Debate for All has been organizing various workshops, camps and school tournaments in places such as Seoul, Incheon, Suwon in Gyeonggi, Gangwon, Daegu, Daejeon, South Jeolla, Jeju Island and other smaller cities where debate education is not easily accessible, reaching over 5,000 students. In 2014, the start-up earned the Korea Value Management Award in the education sector.

One of the most memorable programs organized by Debate for All, according to Rho, is a nonprofit program at a school for adolescent North Korean defectors.

“We taught the seniors, and although on average, they had lived in Korea for three to four years, debate was still a novel idea to them,” Rho recalled. “Through the year, we were able to discuss various issues including what it means to be a citizen in a democratic society, the fine line between individual liberty and government guidance and so on.”

When asked about her plans for Debate for All, Rho said, “Debate remains heavily in the private education scene, and we hope to change that!”