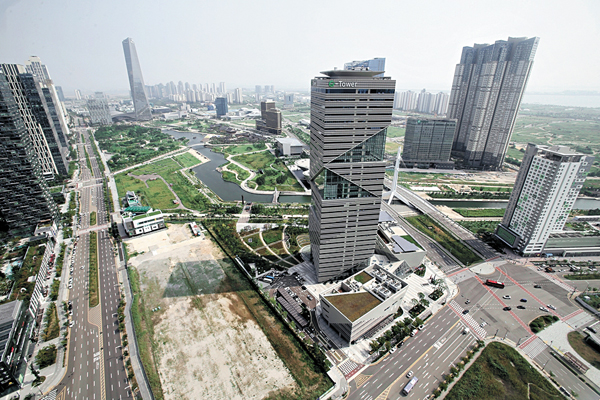 It has been 13 years since the Incheon Free Economic Zone (IFEZ) was designated as the first free economic zone in Korea.
Its inception in 2003 came amid East Asia’s rise as one of the world’s three largest trading hubs. It was created to combat the flow of global capital and technology into China and to close the nation’s gap in competitiveness with Japan. Consisting of three parts — Songdo, Cheongna and Yeongjong Island — the IFEZ entered its final stage of development last year.

The IFEZ has shown remarkable growth in the past 13 years. In 2015, it attracted $1.26 billion in foreign direct investment (FDI), accounting for 82.8 percent of the total FDI in all of Korea’s free economic zones. Having amassed $8.14 billion in FDI since 2003, the IFEZ is at the forefront of the nation’s economic development and job creation efforts.

The economic zone’s center, Songdo International City, is now home to 13 international organizations and United Nations offices, including the Green Climate Fund, the World Bank, the Asian Federation of Biotechnology, and the United Nations Economic and Social Commission for Asia and the Pacific.

Furthermore, the city is working to build its reputation as a global education center. The Incheon Global Campus (IGC) houses campuses from the State University of New York (SUNY Korea), George Mason University (Mason Korea), Ghent University and the University of Utah.
The IGC provides students with a multicultural learning environment and the opportunity to study at its universities’ main campuses for a minimum of one term. This year, additional degree options in business administration, applied mathematics, statistics, accounting and finance were introduced at SUNY Korea and Mason Korea. 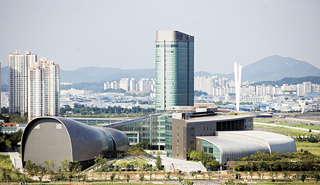 Mason Korea, the Songdo campus of George Mason University, opened in 2014 at the Incheon Global Campus. It is one of three U.S. universities housed on the campus.[Incheon Free Economic Zone]

Late last year, Samsung BioLogics announced its plan to invest 850 billion won ($725 million) to construct its third biopharmaceutical manufacturing plant in the IFEZ. Set to be completed by the end of 2017, the plant will be a world leader in efficiency and production capacity at 180,000 liters (48,000 gallons). With the world’s largest biopharmaceutical production capacity at 330,000 liters, Songdo is on course to become a mecca for the bio industry.

Meanwhile, leading businesses such as Posco Engineering & Construction, Posco Daewoo and Posco Architects & Consultants are relocating their headquarters to the city.

The economic zone is also vying to become a hub for casino tourism, with the Ministry of Culture, Sports and Tourism approving proposals to build three integrated resorts and foreigner-only casino complexes on Yeongjong Island. Named LIPPO & Caesars, Inspire and Paradise City, the three casino-driven integrated resorts will boast a wide range of entertainment and leisure amenities such as hotels, restaurants and gaming centers.

The IFEZ is home to many firsts. Songdo Central Park, located in the center of Songdo International City, is Korea’s first seawater park. In addition, the IGC is the nation’s first project integrating the most reputable departments of foreign universities on one shared campus.
The city also houses the first Korean-American Village, a foreign residential complex that caters to Koreans relocating from abroad. The complex will consist of 830 residential apartments, 1,974 officetel units, 312 guest rooms and a retail shopping mall to accommodate overseas Koreans as they adjust to life here.

Songdo also calls itself a “ubiquitous city,” or U-City, in reference to its integration of advanced technologies throughout its infrastructure. One example is the city’s waste disposal system, which relies not only on garbage trucks but also a network of pipes that carry waste directly to treatment facilities. The city’s water pipes will also be equipped with the ability to distinguish between potable and non-potable water, which will help prevent the former from going to waste in showers and toilets.

The Hana Financial Town project, developed to integrate the finance-related functions of Hana Financial Group by concentrating its headquarters, human resources development center and financial research center in Cheongna International City, is also the first of its kind.

The IFEZ is also the first free economic zone in Korea to export its development model to South America, signing a memorandum of understanding with Ecuador in 2010. Under the agreement, Incheon will help Ecuador lower its reliance on agriculture and shift toward a more knowledge-based economy.

The surge in investment in the IFEZ is largely attributable to Incheon International Airport, which has topped the annual Airport Service Quality Survey for 11 consecutive years. A 20-minute drive from Songdo International City, the airport connects 61 cities and two billion people within a three-hour flight radius.

Foreign investors are also often impressed by how compact, smart and eco-friendly the city is.

Being compact means a city is self-sufficient and offers amenities that are accessible within a 30- to 40-minute walk. Songdo’s business, leisure, education and shopping facilities are all located within 5 kilometers (3 miles) of each other. Songdo is also a smart city in that it allows people to connect to a wireless network anywhere and at any time.

And since its “IFEZ Low Carbon Green City Declaration” in June 2011, Songdo has worked to become more eco-friendly. In addition to its automatic waste disposal system, it also has a water recycling system that repurposes used water for landscaping, gardening and street cleaning.

Expectations for the IFEZ are high due to its proximity to sea ports and Incheon International Airport, as well as its designation as one of two “Economic Cooperation Demonstration Zones” under the Korea-China Free Trade Agreement.

The IFEZ will continue its quest to become one of the world’s top three free economic zones by 2020 based on its four core values: a global mind-set, professionalism, trust and value creation.