Jeju sets sights on being a foodie destination

Jeju sets sights on being a foodie destination

Because not only travelers but also chefs come to the island looking for new things to eat and cook, as there are ingredients rarely or never found elsewhere in the Korean Peninsula readily available here, Jeju locals are trying to make the process easier for outsiders.

Through its first Jeju Food and Wine Festival that ended Saturday, the island proved its potential for becoming a foodie travel destination, especially with its famous pork from black pigs.

To get the three-day event started with some international and local buzz, the organizing committee for the festival and the Jeju Tourism Organization invited 18 chefs from Korea and overseas to demonstrate a variety of ways to cook indigenous ingredients. The festival also cooperated with the already established Hawaii Food and Wine Festival to get insight into how to make the Jeju version of the event more sustainable and popular.

The organizing committee intends to make the festival an annual occasion and the biggest gastronomic event in Jeju by having different talents create new recipes for ingredients that are already familiar to local Koreans.

The engines of the success of the Hawaii Food and Wine Festival in 2011 - chef Alan Wong, the owner-chef of a restaurant of the same name, and chef Roy Yamaguchi of the widely known Hawaiian restaurant chain Roy’s - travelled to Jeju for the event.

Other talents such as Josiah Citrin of the Michelin two-star restaurant Melisse in Los Angeles and chef Masaharu Morimoto of the restaurant Morimoto and the TV show “Iron Chef,” also participated.

And the local ingredient favored by almost every visiting chef was pork from Jeju’s black pigs.

“If there was a way to have this pork in the United States, I would definitely use it,” said chef Citrin, a sentiment echoed by other foreign chefs who got to taste it and use it in their dishes during their stay in Jeju for the festival. He added that it has more flavor than other pork. 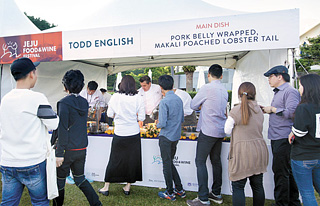 Attendees of “Bounty of Jeju,” the opening outdoor event for the Jeju Food and Wine Festival at the Hyatt Regency Jeju on Friday, line up for lobster tail wrapped in pork belly, a new twist on local ingredients. [JEJU FOOD AND WINE FESTIVAL]

American celebrity chef Todd English even roasted an entire pig during a demonstration for college students, after which he served lobster tail wrapped in pork belly during to the one of the main festival events, “Bounty of Jeju.”

“Pork should taste like pork, and this is what pork tastes like,” said Ming Tsai, the owner-chef of Blue Ginger and Blue Dragon in Boston and the host of the TV show “Simply Ming,” adding that some pork is too bland and tastes like chicken.

Another popular ingredient to use during the festival was gosari, the young stems of bracken, which are in season at the moment.

The event is an efficient way to promote Korean food, said participant Edward Kwon of the restaurant Lab24 in Seoul, adding that it could even encourage exports of Korean ingredients.

“By having these chefs get to experience more of these local ingredients and remember the taste of them, they can spread the word of mouth to other chefs,” he said.

“If there’s enough demand for certain ingredients, new things that were not available before in overseas countries can become available there, and even inspire some to plant seeds to grow their own version of Korean plants.”

While they enjoyed trying ingredients that are not yet widely available outside of Korea, the visiting chefs also seemed familiar with using the already popular gochujang, or red pepper paste.

Chef Morimoto tried to combine Japanese and Korean styles by adding a gochujang sauce on top of his chicken ramen. Chef Tsai also added gochujang to a dish of amberjack he made with Morimoto. Chef Wong presented poke, Hawaiian-style marinated raw fish, made using gochujang and Korean pepper flakes.

“Because I know Koreans do enjoy gochujang, I had this idea before the day I came to Jeju that I will add a gochujang sauce on the side of my dish,” said Morimoto, whose stall had one of the longest lines during the outdoor event.

“But so many people automatically added the sauce to their ramen, so I decided to just serve ramen with gochujang sauce on top.” 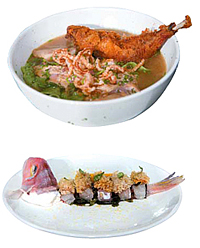 Chefs prepared ramen with pheasant (top) and a raw fish dish during a seminar for students from Cheju Halla University.

To understand better about where local seafood ingredients come from and how they are different from those available elsewhere, two chefs, Wong and Yamaguchi, even went diving along with hanyeo, Jeju’s famous female divers who gather abalones and other edible sea creatures, prior to the start of the festival.

The festival kicked off with the ticketed event called “Bounty of Jeju” at the Hyatt Regency Jeju on Thursday. Six Korean chefs, including Ryu Tae-hwan of Runique, Lee Chan-oh of Manu Terrace, alongside international talents, cooked and served up food outside right beside the sea. Tickets to this event were sold out within a week from when they went on sale in April.

About 600 visitors came to the event and got to taste dishes made by 11 different chefs, including the dessert chefs Seong Hyun-ah of Sona in Seoul and Janice Wong of 2AM: Dessert Bar in Singapore.

The festival ended Saturday with a gala dinner put together by seven chefs from Korea and Hawaii to celebrate the 30 years of friendship between the two islands, along with about 360 guests from the two islands.

The festival also made efforts to educate aspiring chefs and students wanting to work in the hospitality industry. On Friday, many of the participating chefs paired off in teams of two to show students how they work to transform raw ingredients found in Jeju into finished dishes on plates.

Students from Cheju Halla University filled up an auditorium to learn tips on how to cook, and also got a glimpse of how a cooking show is normally filmed as the chefs prepared a dish on the spot.

Chef Yamaguchi teamed up with Kwon to open the session.

Tsai and Morimoto, who both presented their own renditions of ramen noodle soups, went a little bit spontaneous and brought out many more impromptu dishes during the seminar. Tsai, who runs his own TV show, recorded his entire session, which lasted for about an hour, and posted it on his social media. The video instantly got thousands of views.

The idea of bringing in top chefs from overseas proved to be effective, as chef Tsai also said that big name chefs featured in his videos taken throughout the festival definitely drew a huge response from his fans. The video he posted of “Bounty of Jeju” had over 1.5 million likes and reactions.

In addition to the festival, the Jeju Tourism Organization also held a Jeju Gourmet Week for about two weeks until the end of the festival.

Locals and food experts worked together to make a list of restaurants that are scattered all across the island, and participating restaurants gave out discounts to guests. Some served food cooked in the local Jeju style, while some Western-style restaurants used Jeju ingredients to prepare their dishes.

The emergence of many top-quality restaurants in Jeju has happened thanks to many chefs from Seoul and elsewhere in Korea migrating down to Jeju island to open restaurants. This in turn has helped put Jeju on the map for food aficionados.

“Many chefs [in Korea] come to pursue a more relaxing life and good quality ingredients,” said Kim Seung-min of the local restaurant Aruyo.