Number of visitors to Korea expected to soar

Number of visitors to Korea expected to soar 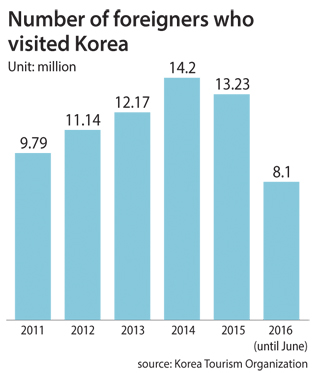 The number of foreign tourists who visit Korea in 2016 is expected to rise by 21 percent to 8.1 million from a year ago, according to tentative statistics from the Korea Tourism Organization released on Tuesday.

The number of foreign visitors who came to Korea in June doubled to 1.54 million, compared to 750,000 who visited during the same month last year.

Such an increase comes as a surprise since the number of foreigners traveling to Korea has fallen by 6.8 percent since the outbreak of the Middle Eastern respiratory syndrome in May and June 2015.

The organization held a tourism exposition called Korea Festival in the Chinese city of Qingdao in eastern Shandong in June, where some 40 organizations participated to attract Chinese tourists.

It also produced some 80 types of tour programs tailored to meet the tastes of Chinese visitors.

Under the auspices of the Ministry of Culture, Sports and Tourism, the organization also convened the festival in Jakarta, Indonesia, in April to attract tourists from the rest of Asia and the Middle East.

Luckily, there was a stark increase in the number of tourists from some parts of Asia in May 2016 compared to last year.

The number of tourists from Indonesia in the same period rose by 40 percent and visitors from India increased by 45 percent.

The number of people visiting Korea in large groups, such as employees on incentive tours, also increased by 35 percent from a year ago to some 140,000.

The Rotary International Convention held in Korea in May also contributed to the rise in tourists, since about 21,000 foreigners attended the event.

The organization’s advertisement campaign, which stars the actor Song Jung-ki, who recently rose to mega-stardom after appearing in the drama “The Descendants of the Sun (2016),” will be released in August.