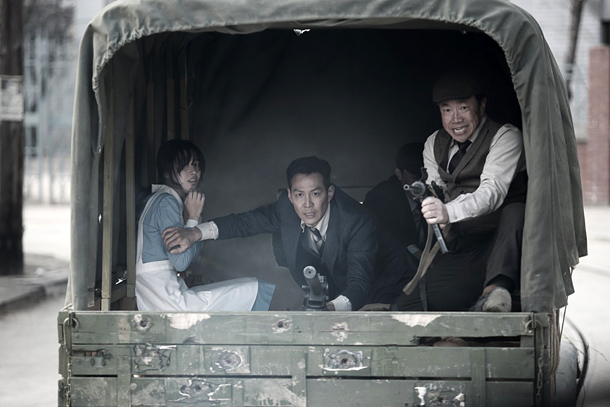 
The pieces are all there - bloody battle scenes, the fraternity of war, conflicts of ideology, familial estrangement and even a budding romance - but upcoming Korean war film “Operation Chromite” fails to portray any of them properly.

Directed by Lee Jae-han, also known as John H. Lee, the film tells the story of the famous operation better known as the Battle of Incheon, which turned the tide of the war in favor of the United Nations and South Korea.

It revolves around eight members of the Korea Liaison Office, or KLO for short, including Navy Lt. Jang Hak-su (played by Lee Jung-jae).

The crew is tasked with impersonating North Korean soldiers and sneaking into the headquarters of the enemy forces, who are led by Lim Gye-jin (Lee Beom-su). They must steal information key to the successful landing of the forces commanded by U.S. General Douglas MacArthur (Liam Neeson) at a time when almost the entire nation is occupied by the North.

The crew’s efforts are based on a real-life mission called Operation X-Ray, and director Lee, who also wrote the screenplay, said he wanted to tell this story to show that the battle was successful not entirely because of MacArthur, but also on the efforts of ordinary Korean soldiers.

The film’s first 30 minutes, during which the crew works to charm Lim and steal the information, is its best. But what starts as a fairly straightforward espionage thriller soon gets bogged down in cliches and melodrama.

In one early flashback, MacArthur comes across a crying young Korean soldier in the middle of the bleak battlefield. When was asked why he still remained in position, the boy weeps, “I wasn’t ordered to withdraw. Give me a gun and bullets.”

The line itself is groan-worthy, but things get worse during a subsequent speech MacArthur gives to his peers opposed to the operation.

“I decided to save the country of this young soldier,” he says, and as the music becomes softer, it’s painfully evident that Lee wants his audience moved by the boy’s patriotism.

The film has many similar scenes that have been heavily doused in nationalism.

But despite the film’s bad script and two-dimensional characters - including the villainous North Korean leader Lim, who kills his own troops for no apparent reason - it is, perhaps most unforgivably, just a bad war movie.

Despite its whopping 16 billion won ($14 million) budget, probably the highest among all the domestic films released this summer, the battle scenes are surprisingly shoddy. Those expecting “Saving Private Ryan” (1998) ought to look elsewhere.

At the end of the day, “Operation Chromite” feels more like an homage to propaganda films of times past than a summer blockbuster.

It opens on Wednesday at theaters nationwide. The film is rated 12 and over, and runs 111 minutes.