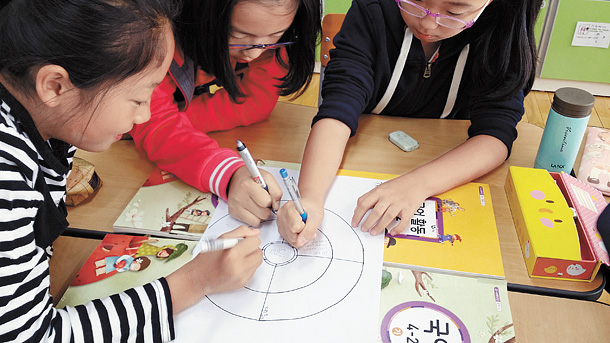 Students in the fourth grade of Incheon Choeun Elementary School in Yeonhui-dong, western Incheon, read a fairytale book together and write down both positive and negative experiences they have had with their families or friends. [PROVIDED BY INCHEON CHOEUN ELEMENTARY SCHOOL]

Despite having been passed in the National Assembly, few actually know what the Character Education Promotion Act is.

“What’s that? Is there such thing?” said Jeong, a high school teacher in Songpa District, southern Seoul. “I’ve never heard of it.”

“We altered what we already had for character education,” said a middle school teacher in Gwanak District, southwestern Seoul, “but we have limited time and budget, so…”

The Character Education Promotion Act was unanimously passed a year go in the National Assembly with the aim of developing students’ characters. Early this year, one autonomous private high school in Seoul made a “character education section” in accordance with guidelines from the Ministry of Education (MOE). Most of the sector’s work, however, consists of keeping their haircut policy and managing ill-mannered students.

“The student affairs department only changed the title of this sector,” revealed one of the school’s teachers. “We don’t do additional character education.”

The Korean Federation of Teachers’ Associations (KFTA), in a study commissioned by the JoongAng Ilbo, polled 804 teachers and 500 parents, which revealed that 45.9 percent did not know about the government’s “Character Education Five-Year Comprehensive Plan.” When asked whether the school properly implemented character education, 55.3 percent answered “no.”

Moreover, 52.8 percent of the school parents surveyed said that the character education of their children’s schools was “mediocre.”

“When my son was in the third grade, he told me he learned how to be compassionate,” said Kim Ji-yeong, 41, in Seoul. “But it was just the teacher citing the definition and students writing it down in a notebook.”

“We have legislated a law after taking public views into consideration, but the MOE is neglecting character education,” said Saenuri rep. Choung Byoung-gug, leader of the National Assembly’s character education action forum, “I think the biggest problem is the government’s lack of awareness.”

The MOE is being criticized for coming out with a “floppy comprehensive plan,” which is the backbone of the character education policy. According to the legislation, MOE was to have a comprehensive plan by the end of last November with a goal to initiate character education in all schools across the nation for this year’s first semester, but the National Character Education Committee that was responsible for planning this was only formed in January. The plan was finalized in February after one mandatory meeting. A member of the committee, who requested to remain anonymous, revealed, “We came out with a preliminary plan by clumsily compiling current policies without any discussion.”

“Every week, we created and shared programs between teachers but everything fell apart in the first semester,” said Park, a middle school teacher. “Since the MOE and school principals have a lack of interest in character education, it’s hard as a teacher to put it into action, even if it’s meaningful.”

But parents have chosen character education as the top priority, coming in first in all categories (44.8 percent). It was chosen over creativity (20.4 percent) and career-focused education (14.4 percent).

“English and math can be taught in private institutions,” said Lee Min-jae, 39, the father of a sixth grader in Gaepo-dong, southern Seoul. “But character education is another thing.”

In the field, teachers have requested the MOE to proactively expand character education. “The government is essential for changing the values and culture of schools and teachers,” said Mun Gyeong-min, an Eonnam Elementary School teacher in Gyeonggi. “There would be a considerable difference in our field if MOE did this.”

“Just like the adage says, ‘it takes a village to raise a child,’ so society needs to be the core and an example of character education,” Lee Je-hoon, president of ChildFund Korea, remarked. “Instead of thousand words being spoken about character education, all that’s required is a little action.”