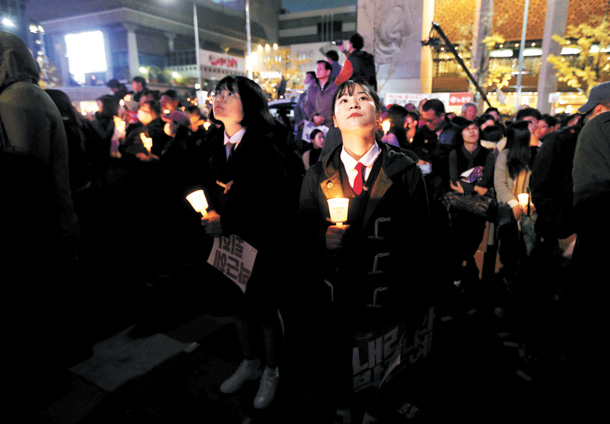 Thousands of teens participate in a recent candlelight vigil in Gwanghwamun Square, some of whom joined an online chat on TONG, the JoongAng Ilbo’s website for teens, to share their opinions. [KIM SEONG-RYONG]

Behind massive candlelight vigils at Gwanghwamun Square were teenagers who did not hesitate to raise their voices.

TONG (tong.joins.com), the JoongAng Ilbo’s website for teens, organized an online chat with teen readers and reporters who have participated in the recent candlelight vigils demanding the resignation of President Park.

A 16-year-old named Ma In-Kwon (not her real name) said, “I don’t know why adults pay attention to our voice only when they need it. Haven’t we always expressed our opinions? We are angry because we are part of this society, just like any adult.”

The chat started with participants correcting common misconception against teens, saying this is not the first time for them to have raised their voices.

Most have participated in rallies opposing the state’s authoring of history textbooks, memorial rallies for the sinking of the Sewol ferry and weekly Wednesday rallies to demand an official apology from Tokyo for victims of Japanese wartime sexual slavery.

The participants expressed discomfort about recent media attention they’ve received, which they feel has been patronizing.

“I appreciate that teens’ participation is accepted,” said an 18-year-old named Park Hyun-soo, “but at the same time, I feel like adults have certain standards for teens and judge us accordingly.”

“I put up a poster to demand the resignation of President Park and my teacher took it down,” said Hong Lee-hye, a freshman at a school in Gyeonggi, “then asked me about my intention.” Some school regulations ban students’ political participation.

“Students’ political participation is not against the law,” said Choi Se-won, 18, “but it seems school regulations are above the law.”

But the degree of regulation depends on each school.

According to Choi Young-il, a high school freshman in Seoul, “My school made a broadcast to encourage participation in rallies.”

Parents vary in their reactions. Ra Mi-lan, a high school student in South Jeolla, said, “My dad was part of an activist group when he was a student at Chonnam National University, but he doesn’t want me to participate in rallies. He says people at my age need to focus on knowledge rather than experience, and that rallies are dangerous.”

“My dad, who was also an activist,” said Choi Se-won, “discouraged my participation. When I kept going to rallies anyway, he started supporting me.”

But students said they faced more challenges at rallies. Kim Hye-soo, an 18-year-old in Seoul, said, “When I protested the state’s authoring of history textbooks, old men at the rallies yelled at me, saying ‘Your job is to study!’”

Girls said they were exposed to sexism. “I heard someone say ‘Don’t wear a skirt to the rallies,’ while some people stared at me in an uncomfortable manner,” said Choi Se-won. “My photo at the rallies was released and I was very uncomfortable to see comments about my body parts and appearance.”

Students also complain about alcohol consumption, smoking and swearing at the rallies.

“I participated in middle and high school union rallies,” said Choi Young-il, “and some adults smoked and used bad language in front of us, saying we took their spot.”

Park Min-joo, a freshman in Gyeonggi, said, “A lot of parents bring their children to the rallies and I do hope alcohol and smoking would be removed for everyone’s safety.”

Seo Yoo-min, a high school student in North Jeolla, expressed worry about the emotional nature of rallies, saying, “It was the first time for me to participate in rallies, but I was surprised that all people did was yell ‘Resign!’ instead of suggesting solutions.”

But, despite some challenges, students said they saw hope at the rallies. Choi Young-il said, “I was heartbroken that my own country was rampant with corruption, but the maturity I saw at the rallies showed me that I live in a good country.”

All participants said they will participate in the coming rallies. Byeon Aa-reum, a middle school student in Gyeonggi, said, “I thought politics was for adults, but I’ve changed my mind after the recent scandal. I keep worrying about the generation who will be taught by the state-authored history textbooks. I will do everything I can to let the next generation live in a fairer society.”