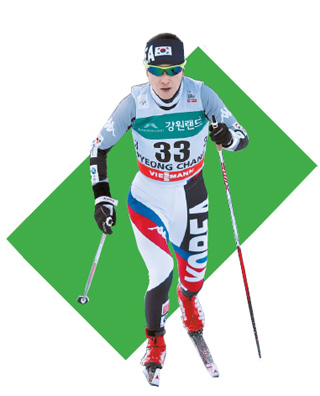 The International Olympic Committee (IOC) describes cross country skiing as “the oldest type of skiing” that emerged “from a need to travel over snow-covered terrain.” Since it was developed into a sport at the end of the 19th century, it has garnered a reputation as a “marathon on the snow” by fans across the globe.

Indeed, as attested by its nickname, skiers have to race through different types of terrain, which can extend to as long as 30 to 50 kilometers (18 to 31 miles) depending on the event. For Lee Chae-won, a Korean cross country skier, her arduous journey through the snow starts and ends in Pyeongchang, Gangwon, her hometown and the venue for the 2018 Winter Olympics.

“It’s a lonely battle against myself as I plow through the snow,” said Lee about the sport she’s competed in for the past two decades.

The 35-year-old skier competed in the FIS Cross-Country World Cup, presented by Viessmann, which took place from Feb. 3 to 5 at Alpensia Cross-Country Skiing Centre and doubled as a test event intended to check the tracks before the Olympics next year.

During the 15-kilometer skiathlon event on her home turf, Lee crossed the finishing line after 46 minutes and 02.07 seconds and finished 12th among the 29 racers. This was the best outcome achieved by a Korean cross country skier in a Cross-Country World Cup event. Her personal best came two years ago in Davos, Switzerland, when she finished the event 43rd.

While her international stint may not look as impressive, Lee is a legend when it comes to domestic cross country skiing. In the national winter competition, Lee has raked in over 60 golds. She’s also a steady contestant, appearing in four straight Winter Games since the 2002 Salk Lake Winter Olympics.

Her major win on an international stage came during the 2011 Astana?Almaty Asian Winter Games when she climbed to the top of the podium in the 10-kilometer free event.

Over the years, her legs and physical endurance may have weakened, but she more than compensated for this with her will and amount of training. “I haven’t skipped a day of work since I started this sport,” she said.

Now counting the days until the PyeongChang Olympics, Lee says she would like to finish strong in front of her friends and families in her hometown. Although she finds the Alpensia course challenging, she topped both the 5- and 10-kilometer events during the Far East Cup last month.