Left: The PyeongChang Olympic Stadium, where the opening and closing ceremonies of the 2018 Winter Olympics and Paralympics will be held, in Pyeongchang, Gangwon. Right: A rendering of the stadium after the event. [PYEONGCHANG ORGANIZING COMMITTEE] 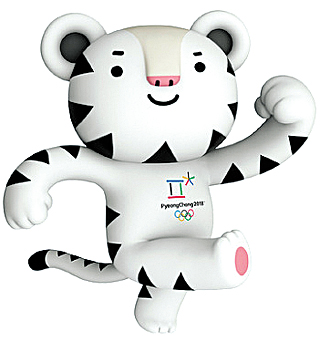 The Olympics can bring many benefits to a host city over the duration of the Games, but when the big event ends and all the athletes go home, many municipalities struggle to utilize and maintain the facilities they have built.

With Korea set to host the Winter Olympics in less than 200 days, the PyeongChang Olympic Stadium, the main venue, has received a great deal of attention for its cost and post-Games plan.

Even though 63.5 billion won ($56.9 million) was spent on building the stadium, it will only be used four times: for the opening and closing ceremonies of the Olympics and Paralympics. No athletic events will take place there since most of the sports will be played on mountain slopes and ice rinks. 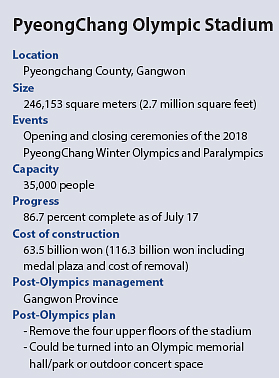 As of July 17, construction of the stadium is just under 86 percent complete. The remaining work is expected to conclude by the end of September. With seven floors and 246,153 square meters (2.7 million square feet) of space, the pentagonal arena will be able to hold 35,000 spectators, plus 6,500 athletes and their coaches during the ceremonies.

Currently, the PyeongChang Organizing Committee has ownership of the stadium. After the Olympics, the committee will pass it on to the Gangwon provincial government, which has jurisdiction over Pyeongchang County. Removal of the podium in the stadium center is expected to cost 30.5 billion won, bringing total investment in the stadium to 116.3 billion won.

That still doesn’t factor in maintenance, which is expected to cost the provincial government about 4 to 5 billion won a year.

“Looking at the construction of facilities for big sports events, it seems like local governments care more about the builders than local residents,” said Chung Hee-joon, a professor of sports science at Dong-A University in Busan. “The maintenance cost of sports facilities will end up being covered by local residents. Since the population in Henggye-ri [in Pyeongchang] is only 4,000, there are no such post-event management plans for the Olympic stadium.”

The provincial government has said that it plans to turn the stadium into a concert hall or memorial park by November 2019, but design plans have yet to be made.

The headache over how to reuse an Olympic stadium after the Games has led past host cities to forgo building a centerpiece arena altogether. During the 2006 Winter Games in Turin, Italy, the local Olympic committee decided to renovate an old stadium for the opening and closing ceremonies rather than building a new one.

After the event, Torino FC adopted it as their home stadium.

Similarly, the Vancouver Organizing Committee for the 2010 Winter Games remodeled BC Place, an existing stadium, for the opening and closing ceremonies. It is now the home of the Vancouver Whitecaps, a Canadian football club.

The 2014 Sochi Winter Games offer a cautionary tale for host cities on post-Olympics management. Renovations to the Fisht Olympic Stadium after the Games were delayed for months, but it eventually opened as a football stadium in 2016 and hosted the 2017 FIFA Confederations Cup. It’s set to host the World Cup next year.

“When Korea hosted big sporting events like the 2011 World Championships in Athletics in Daegu, the 2014 Asian Games in Incheon and the Korean Grand Prix from 2010 to 2013, there were big deficits,” said Choi Dong-ho, a sports analyst. “This time, they have to think about plans after the Games. If not, they will face another disaster.”

In November 2014, the central government suggested renovating Gangneung Stadium in the nearby city of Gangneung for the opening and closing ceremonies in order to reduce the budget. But the residents of Pyeongchang protested, citing an Olympic rule that dictates all sports competitions and ceremonies should, in principle, take place in the host city. The central and provincial governments relented and agreed to build a new stadium in Pyeongchang.

Since the stadium is essentially being built to serve a temporary purpose, there have been many concerns about safety. For instance, to make postgame renovations easier, builders are using an aluminum frame structure to build the stadium. The stairs in the upper-level stands are steeper than the bottom because they will eventually be removed, and the stadium will not have a roof, raising concerns that crowds will have to watch the ceremonies in the cold. The average temperature in February, according to the Korea Meteorological Administration, is negative 4.5 degrees Celsius (24 degrees Fahrenheit).

“We’re worried that a majority of the spectators will have to rely on blankets and hot packs for more than four hours,” said a source at the PyeongChang Organizing committee.