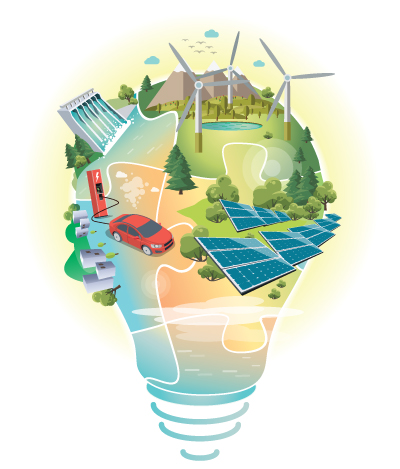 Since the discovery of fire a million years ago, the manipulation of earth’s natural resources has driven the course of human history. From coal and oil to solar and wind power, energy is one of the most consequential elements of human existence.

From the early 20th century, environmentalists, academics and politicians around the world have warned of limits to earth’s natural resources, arguing that humans will face significant energy shortage in the near future. In 1939, the U.S. Department of Interior estimated that American oil supply would only last another 13 years. The report came on the heels of the so-called end of oil panic that suggested rising use of cars, trains and ships would deplete supply. In 1949, the department released another worrisome statement saying, “The end of U.S. oil supply is in sight.”

Such arguments were later supported by many scholars, including the geologist M. King Hubbert, who in 1956 developed a theory that petroleum production follows a bell-shaped curve, hitting a peak before dropping off significantly. His theory suggested that U.S. oil production might reach its apex in the early 1970s and fall dramatically.

Although Hubbert was right about U.S. oil supply reaching its apogee in the ’70s, his assumption that it would lead to a resource shortage proved wrong. Technological developments helped humans harvest energy from more unconventional sources like shale gas embedded in rocks and power from the sun.

In Korea, the Ministry of Trade, Industry and Energy estimates that the country’s electricity demand will drop to 101.9 gigawatts in 2030 from the current 113.2 gigawatts, largely from a fall in population due to a low birthrate, aging society and tapering demand from slow economic growth.

But it expects demand for renewable energy to rise, and the government has pledged to spend 760 billion won this year on researching growing energy sectors like renewables and smart grids. The investment is a 36 percent increase from last year. The goal is to develop technology that helps people produce and consume energy in smarter and more efficient ways.

“In the past, people just thought it was always best to produce as many goods as possible at lower prices, but that is no longer the case,” said Lee Min-hwa, chairman of the Korea Creative Research Network. “Individuals will want to have goods when they need them, and producing an excessive amount of goods that exceeds demand is a waste. When the fourth industrial revolution occurs, humans will reduce such waste, and electricity consumption and trade volume will drop significantly, or become more optimized.”

Many countries have focused on upgrading their power infrastructure to include smart grids. These grids use advanced information technology to efficiently deliver electricity and maximize power by analyzing its distribution.

The technology first became popular in the United States in the early 2000s, and the Korean government in recent years has invested heavily in the newly growing sector to monitor electricity usage across the nation. The pursuit has led to projects like making the island of Gapa in Jeju carbon-free by offsetting carbon emissions with renewable energy and developing a high-capacity energy storage system, which stores power captured from renewable sources like a battery.

The promise of smart grids is letting people use energy when they need it and at lower prices because power distributors can use analytical technology to better manage electricity supply.

Infusing smart grids with artificial intelligence can potentially even help distributors forecast unpredictable demand for power. The Ministry of Science and ICT said in a recent report that smart grid technology could help people prepare for abnormally hot or cold weather and significantly reduce the possibility of blackouts.

“The world is now transforming to focus on renewable energies and smart grids even though many countries are not totally going to give up on nuclear power plants,” said Kwak Dae-jong, a senior researcher at the Korea Institute for Industrial Economics and Trade. “I don’t think power consumption will drop significantly in the future since many of the sectors will be computerized and automated [which means more electricity use]. But I think that the major topic in the future will still be reducing electricity use and managing demand in a smarter way.”

As the world is focusing on using energy more efficiently, many Korean utilities providers and telecommunications companies are expanding into the business to achieve such goals.

KT, the country’s second largest telecom company, installed a system last year that monitors electricity consumption in its buildings and determines ways to reduce usage, such as cutting down on unnecessary consumption during non-peak hours.

The company initially developed the technology for its own sake because KT’s electricity use accounts for about 0.5 percent of total electricity consumption in the country. Power costs can run up to about 300 billion won ($262 million) a year. It’s still early to tell how much the system has saved the company, but KT so far seems satisfied with it and is now providing the service to other companies.

“We plan on installing the system in 6.2 million buildings across the country by the end of this year,” said Kim Young-myeong, head of KT’s creative economy initiative.

A spokesman at the telecom company said many building owners in Korea don’t have much knowledge about saving energy and pointed to an example in Daegu, where KT did a test run of the service in an apartment complex. The company said it helped shave energy consumption there by 70 percent.

According to KT, sales in its smart energy business amounted to 46.7 billion won during the first half of the year, which has already surpassed the 42 billion won in annual sales recorded last year.

Many companies see smart grids as a high-potential market with room to grow. According to a report jointly written by the Ministry of Science and ICT, Korea Institute of S&T Evaluation and Planning (Kistep) and Korea Advanced Institute of Science and Technology (Kaist) earlier this year, a city with a population of more than a million people is expected to fully enjoy smart grid technology by 2022 at the earliest in the United States and by 2024 in Korea.

The market size of smart grids in Asia is set to grow to $13.9 billion by 2019 from $7.6 billion in 2014, according to Korea Institute of Science and Technology.

Navigant Research, a global market research firm, estimates that the global market for microgrids, small-scale power grids that can work independently, will rise to $40 billion in 2020 from $8.3 billion in 2013. Microgrids can be used in remote areas like islands, where it can help distribute power generated from sources like renewables.

The Korea Electric Power Corporation (Kepco), the country’s state-run utilities provider, is investing heavily in new energy technology, pledging 764 billion won through 2020 in nine areas that include developing new ways to monitor energy consumption, sharing big data on electricity use and finding new business models. The company said it would utilize artificial intelligence to help monitor conditions at its energy facilities 24 hours a day and predict their lifespan to cut operation costs.

Safe operation has always been a key criterion when working with electricity, and technological developments are also helping Kepco improve their safety standards - through drones and thermal imaging cameras.

Last year, the company developed a diagnostic system to detect failures in their equipment. The system analyzes images taken by drones and thermal imaging cameras attached to utility poles and installed in their power facilities. Workers are immediately notified of any problems.

An official at Kepco said the company has been able to manage electricity more safely, stably and efficiently using the system and is in talks with foreign counterparts about exporting it.

“The number of power outages in the country dropped significantly, and we believe it was helped by our monitoring and maintenance technologies,” said Moon Il-joo, a director at Kepco. “The technologies allow us to save time and human labor while providing more accurate results.”

Energy experts believe the industry will change its thinking from worrying about how to produce energy to how to use them when needed in the future.

“Largely thanks to technological innovations, many companies can produce diverse kinds of energy while also being able to store and control them more efficiently,” said Choi Joon-kyun, a professor at Korea Advanced Institute of Science and Technology. “I believe it is inefficient if people can’t consume energy when and how they need, even with how cheap it is to produce and distribute energy. I think the concept of creating new profit through sharing energy might exceed that of simply selling energy in the future.”

A report by Ministry of Science and ICT, Kistep and Kaist suggests that the paradigm of the energy industry is shifting from production-focused to service-focused and that consumers will have more choices of which type of energy they would like to use.

“We expect that the state-controlled energy distribution system will be broken down and be replaced by smart grids that will automatically analyze data and supply,” the report argued. It said energy “prosumers” who can generate energy with solar panels or other renewable measures will emerge as key players in the future and that the renewable energy market will grow significantly.

Kwak Dae-jong, a senior researcher at KIET, said the government should push ahead with developing the renewable energy sector by taking full advantage of smart grids.

“It feels contradictory to push ahead with renewable energy when considering the dependency on nuclear power plants,” Kwak said. “But when looking at the case of the United Kingdom with its ’Smart Power Revolution’ initiative in early 2016 to focus on renewable energy and grids, it seems necessary for Korea to take similar measures. It might also be useful to connect the country’s smart grid networks with other countries and to come up with plans to develop hardware and parts that the country still has weaknesses in and to increase the market size of renewable energy.”

As more people produce their own electricity through renewable energy and enjoy various kinds of digital devices, technologies for storing as much energy as possible for a longer period of time have also been hot.

Battery technology has developed significantly in the past few decades due to the rising use of digital devices like MP3 players, digital cameras, laptops and smartphones. One of the key developments in the sector is the rise of the rechargeable battery, which has been touted as a key part for electric vehicles. Automakers across the world are now competing with each other to acquire battery technology.

“Once an electric commercial vehicle that can drive 800 kilometers on a single charge is released in the country, we expect a number of sport utility vehicles, buses and trailer trucks will come out in the market using the latest battery technology as well,” the ministry said in a report.

The report expected that after electric vehicles become commercialized in the country, their high-capacity batteries will also be used in homes and buildings to deal with power outages and peak-use hours.